The Confederate Reunion Grounds State Historic Site preservers is where, between 1889–1946 Confederate veterans and their families would come together in order to honor those lost in battle. It is comprised of 76 acres which include an 1893 dance pavilion, an entrance marker and iron archway, an 1920s pump house, ruins of Miss Mamie Kennedy’s “Delight House,” Colonel Humphrey’s Arch and Spring, rock and concrete barbecue pits, rock chimneys, foot bridges, ponds, fountains, cisterns, and wells. Today, the site offers living history events, lectures, movie nights, and other activities.

Between 1889–1946 Confederate veterans and their families would gather here socialize and have a good time. Today, it is a living history site. 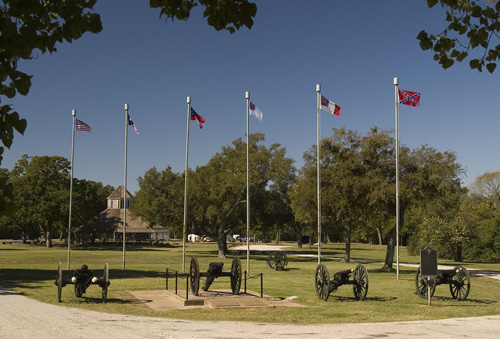 Since somewhere between 6000 to 200 B.C., people have been taking advantage of the pristine natural beauty that this specific tract of land has offered. Located at the convergence of the Navasota River and Jack's Creek, it was once home to various Native American tribes, such as the Caddo, Tonkawa, Tehuacana or Wichita, and the Comanche, throughout history. These hunter-gather groups most likely hunted bison herds that roamed the Backland Prairie.

During the 1880s, former Civil War soldiers began to meet in order to reminisce their war-experiences and honor those brothers lost in combat. In 1888, they began meeting at this site and called it the “Pen Campmeeting Grounds.” According to the Texas Historical Commission, "The next year, they organized the Joseph E. Johnston Camp of the United Confederate Veterans (UCV), named for the commander of the Confederate Army of Northern Virginia and Tennessee. The chapter became the 94th affiliate of the rapidly expanding UCV." The money that it took to purchase the grounds was raised by selling camping lots to those veterans who would attend the reunions.

The annual reunions were held in late July or early August, and many veterans who bought camping lots constructed cottages and planted perennials that still bloom today. According to the Texas Historical Commission, during the meetings at dawn and dusk, the reuniting veterans would fire Old Val Verde, one of the two Union cannons the Confederates captured in the battle of Mansfield, Louisiana in 1864. The cannon can still be viewed at the grounds as it is displayed beneath the flagpoles at the center of the site.

Additionally, the reunions included performed eulogies for fallen soldiers, parades, brass band concerts, games, and southern cuisine. The pavilion where the dances were hosted can still be seen on the grounds and is a national historic site prized for its unique architecture.

According to the Texas Historical Commission, "In 1892, veterans and families began purchasing lots at $5 each to pay for the first 20 acres of land purchased by Camp 94 UCV for a sum of $200 from the Mexía family. Each purchaser received a deed for camping privileges at the reunions. Added to the 20 acres purchased in 1892, were tracts purchased from several individuals including African American families who had worked the fields as former slaves or who had migrated to the area after Emancipation."

Throughout the years, reunions became smaller, and in 1946, "the charter of Camp 94 expired and the grounds fell into disuse." The grounds were donated to the state in 1983. Now maintained by the Texas Historical Commission, the grounds are still used as a gathering and living history site.