George M. Verity is a historic sternwheel steamboat that is now located in Keokuk and home to a small museum that preserves the history of river traffic along this section of the Mississippi River. This craft is historically significant as it remains one of only three steam-powered towboats in the United States. Built as the SS Thorpe in 1927 in Dubuque, this craft entered service by towing barges on the upper Mississippi. The craft was renamed by her new owner in the 1930s and became an official historic landmark in 1989.

The George M. Verity museum offers tours of the historic craft and exhibits that preserve the history and culture of river transport along the Mississippi in the age of Mark Twain. 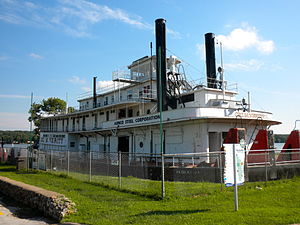 The first of four steamboats built for the revival of river transportation, she was the first to move barges from St. Louis north to St. Paul. She remained in service there until 1940, when she was sold to Armco Steel Corporation and put into service on the Ohio River. Armco named the ship after their founder. In early 1930 a texas deck was added, the pilothouse moved to its actual position and also the smokestacks became higher.

In 1960 the George M. Verity was retired after 33 years of service on the Mississippi and Ohio Rivers, and in 1961, the boat was given to the City of Keokuk for use as a river museum. Today the boat serves as a museum, placed on a concrete foundation in a riverfront park.

Open daily from 9am-5pm from April to November

This short drive through Keokuk includes stops at area museums, historic homes, landmark buildings such as Hotel Iowa, and sites such as Lock and Dam Number 19 that were central to the city's development. Highlights of the tour include a historic sternwheel riverboat that now operates as a museum, the home of General Samuel R. Curtis, Keokuk National Cemetery, and a monument dedicated to the Native American leader Chief Keokuk.