Perhaps one of Council Bluffs' most famous residents, General Grenville M. Dodge has been called "the greatest railroad builder of all time." A Civil War officer, Dodge's involvement in political, financial and military affairs made him an associate of many of the most influential Americans of his time and counsel to presidents, including Abraham Lincoln and Ulysses S. Grant. The Grenville M. Dodge House was his home. It is now open to the public as a museum. 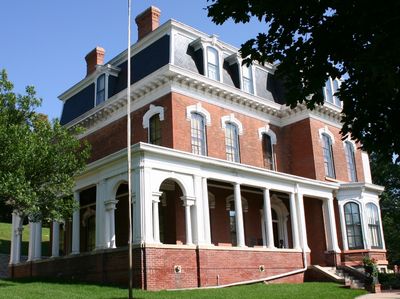 In 1869, Dodge built his handsome Victorian home at 605 Third Street at the cost of $35,000, which was a  lavish sum at that time. The house was designed by William Boyington, a Chicago architect. General Dodge was deeply involved in the planning and building of his home, making several modifications, such as central heating and hot and cold running water. Despite the home's elegant appointments, it is important to remember that it was built on what was essentially the frontier.

During his lifetime, he engaged in the mercantile business, organized a bank, surveyed the Missouri River Valley to the West for the Transcontinental Railroad, served a term in the U.S. Congress, and served with distinction in the Civil War, attaining the rank of Major General. Although, Grenville Dodge achieved fame, fortune and historic importance by being a renowned railroad builder, it is said that he was the youngest General in the US Army until WWII.

This short walk through the heart of Council Bluffs begins at a historic church established by German immigrants and moves on to several important downtown buildings such as the former Chieftain Hotel. Highlights of the tour include the Union Pacific Railroad Museum and the former county jail known for its unique system of rotating cells that led to the nickname "Squirrel Cage." While this walking tour focusses on the center of the town, be sure to also explore some of the landmarks along the river that are in Clio, including the Western Trails Center.