The Amana Colonies are seven villages on 26,000 acres located in east-central Iowa. The villages were built and settled by German Pietists, who were persecuted in their homeland by the German state government and the Lutheran church. They first settled near Buffalo, NY. However, seeking more isolated surroundings, they moved to Iowa, and lived a communal life until the mid-1930s. 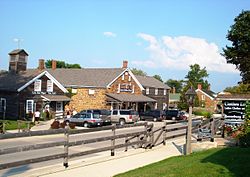 For eighty years, the Amana Colonies maintained an almost completely self-sufficient economy, while importing very little. The Amanians were able to achieve this independence and lifestyle by adhering to the specialized crafting and farming occupations that they had brought with them from Europe. Craftsmen passed their skills and techniques on from one generation to the next. The community voted to form a for-profit organization during the Great Depression, and began the Amana Society, which included the Amana Corporation.

The Great Council of the Brethren, also known as the Board of Trustees, oversaw the affairs and conduct of the Amana Society. Trustees were expected to tend to the internal affairs of the Society as well as its external business interests. Today, Amana is a major tourist attraction known mainly for its restaurants and craft shops. Included in the shops are woodworking shops, wine shops, and even a brewery called Millstream.