This historic theater opened with a performance of the Rejuvenation of Aunt Mary on June 23, 1910. Known at the time as the Cotton Theatre in honor of owner Frank Cotton, the theater fell into disrepair and might have been demolished had it not been for the efforts of preservationists and city leaders and the generosity of donors. The historic theater has been restored and operates today as the Oster Regent Theatre. 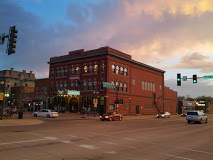 The opening night of the Cotton Theatre was Thursday, June 23, 1910. On that night, The Rejuvenation of Aunt Mary, which was chosen by the May Robinson Company, was featured. The original theater had seats for one thousand people. In 1918, the name was changed to Regent Theatre. In 1991, the Blair family, along with the Beck Trust, gave the theater to the Cedar Falls Community Theatre. In 1994, it was restored at a price of $1.2 million and was given the new name Oster Regent Theatre.

The Cedar Falls Community Theatre was organized in 1978, and had the strong support of the Cedar Falls Recreation Department and a handful of dedicated community members. They started by producing two plays per year on the Holmes Junior High School stage. After 16 years the theatre group moved to the Regent Theatre building.