Established in 1867 by the 6th Cavalry led by Col. Samuel D. Sturgis, Fort Griffin was originally named Camp Wilson, but renamed for General Charles Griffin. Today, the site is owned and maintained by Texas Historical Commission and is highly prized for its natural setting. Fort Griffin has even been designated the official home to the centuries old herd of official Texas longhorns. 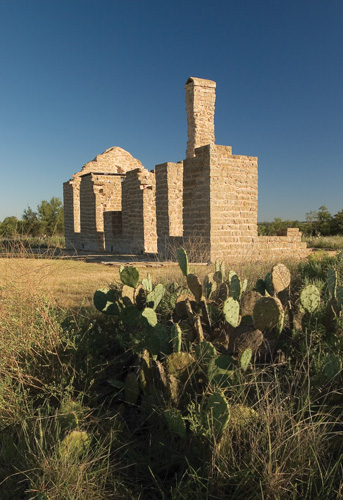 Fort Griffin was first comprised of picket huts built from logs, tents, and other crude wooden buildings since the men of the 6th Calvary had little access to building resources. Additionally, in light of the demand for martial activity and western expansion efforts, the Fort Griffin men had little time to spend constructing outbuildings; only six buildings were made of stone.

The town that was established out of the fort became notorious for being rough and wild. Also called The Flat and Hide Town, the town of Fort Griffin bustled with soldiers, hunters, cowboys, and outlaws who liked to gamble and have a rowdy good time.

During the Red River War of 1874, Fort Griffin was a central base for military activity. It also served the troops who were instrumental in ending the Kiowa and Comanche Indian domination of northern Texas. However, in 1881, Fort Griffin was abandoned and the nearby town soon diminished as well.

Today, the grounds and remains of Fort Griffin can be toured. The site includes the ruins of a a mess hall, barracks, first sergeant’s quarters, bakery, powder magazine and hand-dug well. These ruins comprise a state archaeological site.

Additionally, the site is listed on the National Register of Historic Places.