The New Echota state historic site shows replications and reconstructions of the original buildings of the capital for the Cherokee natives. The land was used by the Cherokee nation beginning in 1819 and lasting until the Indian Removal Act passed in 1830, though many of the natives fought to stay until early 1838. The Cherokee tribe was the most progressive of the natives in the South, adopting many of the modern ideas such as a two party legislature and even creating their own constitution. Today, 12 of the original buildings can be seen through the site, including the historic printing press and council house. 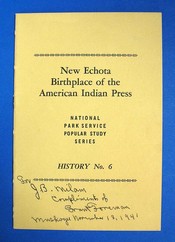 This is the removal treaty issued by Georgia accessed at the Library of Congress. 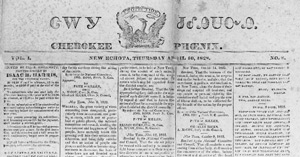 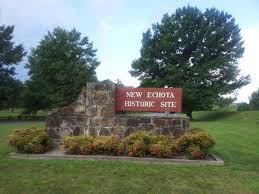 At the headwaters of the Oostanoula river, the Cherokee Nation built their new home and capital for their people. Though the town`s history is short and devastating, it was also one of the most advanced in the ideas of the modern world. In the 10 years of its total inhabitance, the Cherokee tribe created the first written language, founded their own constitution modeled after that of the United States, and manned their own two party legislature, the national council and national committee. In the early days before the town, the Cherokee tribe claimed land in most of the southeast United States. However, by 1820, approximately 90% of that land had been lost to while settlers.

The Cherokee nation adopted many ideas of the United States, including their own constitution and in July 1827, a 3 branch political system made up of the judicial, executive, and legislative branches. The executive branch held the highest titles, such as Principal Chief, Assistant Principal Chief, and the treasurer of the tribe. The legislative branch was made up of the two party legislature, the national council and the national committee. Finally, the judicial branch houses the court system, district, circuit, and their own national supreme court, as well as deputies and judges alike.

They also integrated much of the white culture around them, by each man having their own farmland to produce goods on. Young native children attended schools and learned both the Cherokee language as well as English. In 1821, a written form of the Cherokee language was first put into motion, and the first of any tribe to ever have done so . Sequoia, a Cherokee native, created the written form by giving each of the 86 different sounds a unique symbol. In 1826, the idea of making a national newspaper for the nation was started, followed by a printing press being erected in 1827. On February 21, 1828, the first edition of the Cherokee Phoenix was put into rotation. It was printed in both the Cherokee language and English, and distributed nationally. With the addition of the printing press, other items such as the Bible and novels were translated and circulated in the newfound Cherokee language.

Within the state of Georgia, there were many individuals who disliked the natives and their ways. Debates soon broke out between natives and white settlers over land and resources found in and on the area. With the finding of gold in the Cherokee nation in 1828, officials and settlers were determined to gain this land for their own wants. The Georgia State government sent in the Georgia guard to fight this battle, but in a courtroom, not with physical encounters. This battle was taken all the way to the supreme court, where John Marshall and the court ruled in favor of Wooster, voice of the tribe, and a friend and missionary of the Cherokee people. In this law, seeing as the nation held their own constitution and territory, the state of Georgia did not have jurisdiction over the Cherokee people.

President Andrew Jackson also saw reasoning to halt the expansion of the Cherokee people, and in 1830, the Indian Removal Act was passed. By 1838, troops had stormed the town, with general Winfield Scott in charge, rounding up the remaining natives. In the fall of 1838, these individuals were started on an almost 1000 mile route to the Oklahoma territory they were promised. With the death and devastation that came with this removal, this historic event became known as the Trail of Tears, starting at the heart of the Cherokee capital.

The New Echota Historic Site was dedicated in 1962, and has since been a major tourist stop for those seeking to look at the history of the Cherokee Natives and their journey through the Trail of Tears.