This residence housed Jonathan and Eliza Royle, whom were prominent people in Salt Lake City within political, business, religious and social circles. Jonathan was heavily involved with mining and law and Eliza was involved mainly with women's clubs and organizations.

The Royle House as it looks today 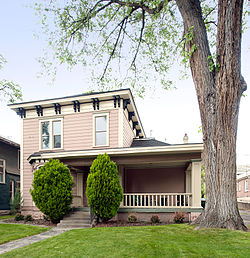 This house was probably built around 1875 for Jonathan C. and Eliza K. Royle.
Jonathan Royle was born October 30, 1828 in Lexington, Kentucky. As a youth,
he assisted his father in the family's woolen manufacturing business,
attending school when he was able. His family later moved to Lexington,
Missouri, where he studied law in the office of Judge Wood, whom he formed a
partnership with after being admitted to the bar in 1853. In 1857, he married
Eliza Kirtley, daughter of Captain Sinclair Kirtley, of Lexington, Missouri.
Royle continued to practice law in that state, and even served as circuit
attorney of the Sixth Judicial Circuit, until the start of the Civil War. At
that time, he joined the Confederacy with a commission as judge advocate
general with the rank of colonel, serving under General Sterling Price. With war's end, he crossed the plains by mule team with his young family,
settling in Central City, Colorado. There he set up his law practice and soon
established himself as one of the leading mining attorneys in the area. In
1869 the Royles moved to San Jose, California for the sake of Mrs. Royle's
health. The following year Royle was invited to Salt Lake City to serve as a
member of the legal cousel in the famous Emma Mine litigation. The Emma
Silver Mine was started in 1868 at Alta, and became the first big producer in
Little Cottonwood Canyon and the Wasatch Mountains.

He was in Salt Lake City only one month before
forming a partnership with Thomas Marshall, a man very much like himself: a
native Kentuckian, a Gentile, and a prominent mining attorney. Marshall was a
nephew of Chief Justice John Marshall of the U.S. Supreme Court. Their
partnership, Marshall & Royle, was one of the most successful in the area and
lasted until Mr. Marshall's death in 1906. Among their clients were the
Central Pacific Railroad and Wells, Fargo and Company.

"Judge" Royle was not only a prominent attorney, but an important leader in
his religious community as well. He was one of the organizers and first
members of the First Presbyterian Church in Salt Lake City, and served as a
prominent elder in that church for many years.

Mrs. Eliza K. Royle was most noted for her activity in womens organizations.
She was one of the organizers of the Ladies' Literary Club, and served as its
first president. A gifted speaker, she was often called upon to address the
group and served as a "spokesman" for the group in its early years. She also
served as honorary vice-president of the National Federation of Women's
Clubs. The Ladies Literary Club was founded in 1877 in Salt Lake City at a
time when the "womens' club movement" was sweeping the nation. It was founded
by a group of women who disliked the exclusive nature of the existing clubs,
and who felt "that a club should stand for the education of many rather than
culture for a few. . . ." The Club continued to the present serving as a
cultural center for women of the community.

The Royles apparently had this house built about 1875, after having lived at
various addresses the previous three years. At the time this house was built,
it was probably one of the finest houses in the area and was one of the first
of the many distinguished residences that were built along First South Street
during the ensuing decades. Neighboring "mansions" were subsequently built by
Utah Governor Simon Bamberger, Salt Lake City Mayor
Francis Armstrong, and prominent businessmen, J.
Salisbury, and Peter W. Madsen, to
mention a few. The Royles, along with their four children, made this house
their family home for over thirty-two years. In 1907, probably while their
new house was being built in the Avenues, the Royles lived in the Brown
Apartments. From 1908 until Jonathan's death, Eliza
Royle apparently either continued to live in this house with her daughter,
Martha, or moved to New York to live with one of her sons. Little is known of her death.

The Royle children, like their parents, were also prominent in their chosen
fields; however, they all moved out of the state. Jonathan C. Royle, Jr., a
prominent journalist, worked for the Salt Lake Herald in 1907, then went on to
distinguish himself in New York City, serving as editor of U.S. Daily News,
and as founder of Business News Service, a company he headed until his death
in 1934. Another son, Edwin M. Royle, was a noted dramatist who wrote many
well-known plays around the turn of the century, most notable of which is The
Squaw Man. He, too, made his home in New York City where he died in 1942.
The third son, Sinclair Royle, also established himself in New York City and
became a noted surgeon. He was a former student of the Salt Lake Collegiate
Institute, now Westminster College. The Royle's only daughter, Martha,
married Salt Lake newspaperman Eugene B. Palmer, who later became an
investment banker and moved to San Francisco. Martha Royle Palmer, like her
mother, was also very active in the Ladies Literary Club, holding several
offices and forming the dramatic section.
Thomas J. Osborn, who bought the house in 1908, was also an attorney and may
have been one of the many young lawyers who were trained by Jonathan Royle.
Osborne died in 1918, four months after selling this house and moving to
Pioche, Nevada, where he had become involved in mining.
William and Emma L. Armstrong bought this house in 1919 and lived here for
twenty-one years. Emma Louise Armstrong Armstong was a daughter of
Isabella S. and Francis Armstong, former mayor of Salt Lake City, whose house
was nearby. The Francis Armstong family owned much
property in the southeast corner of this block, and several family members
lived in the neighborhood at various times during the early decades of the
twentieth century. William Armstrong was a Mormon convert from
Australia who came to Salt Lake City in 1888 at the age of 18. For a short
time after his marriage to Emma in 1901, he was employed by his
father-in-law's company, Taylor, Romney and Armstrong Lumber Company. He soon
established himself with Noall Brothers and Armstong Lumber Company, where he
served as secretary-treasurer for many years until his retirement in 1938. He
also served as bishop of the llth Ward for several years.
After the Armstrongs sold the house in 1940, it was converted first into a
duplex, then, soon after, into four apartments. The house remained as rental
property over the next twenty years as it changed hands several times. In
1964, Gary F. and Nadine A. Riddle bought the house and have continued to rent
it out up to the present.