Located in Wausau, Wisconsin, the Woodson History Center houses the administrative offices, research library and archives, and artifact storage of the Marathon County Historical Society. It was built as a family home for Leigh, the daughter of prominent lumberman Cyrus Yawkey, and her husband A.P. Woodson. The family was heavily involved in the economic and social development of Wausau. The Marathon County Historical Society also owns and operates the Yawkey House Museum, located across the street, which is the home of Cyrus and Alice Yawkey. 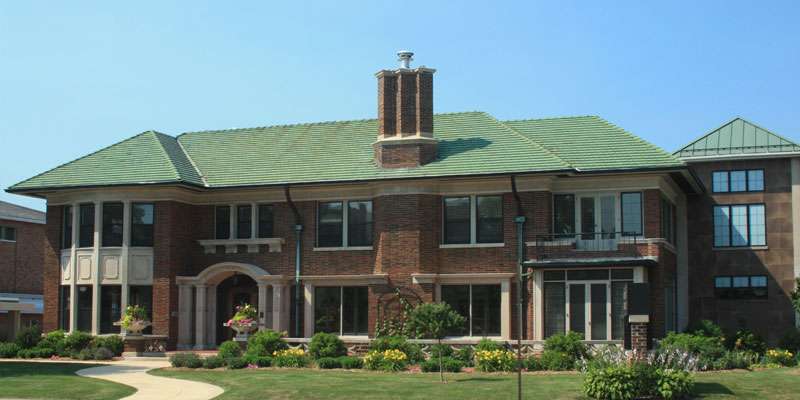 The story of the Woodson History Center began in 1914, when George W. Maher was hired to design a home for Leigh Yawkey and Aytchemond P. Woodson. Leigh was the only child of Cyrus and Alice Yawkey, who were prominent in Wausau business and society in the early 1900s. After Leigh married and moved to her husband’s hometown of Kansas City in 1911, her parents encouraged the young couple to return to Wausau. This house, built across the street from the Yawkeys, was part of the incentive. A.P. Woodson joined his father-in-law in the Yawkey lumber business as an attorney. The Woodson family lived here for 40 years and had three daughters and a son. The son died as a teenager. The three daughters married and raised their own families. The Woodsons carried on the family legacy of being leaders in business and philanthropy.

Immanuel Baptist Church purchased this home in 1956. The church added a sanctuary and basement fellowship hall on the building’s north side in the early 1960s. In 1995, when Immanuel Baptist moved to Rib Mountain, the Historical Society acquired the property. A restoration project was completed in 2010. The building now houses three exhibit spaces, climate-controlled areas for archives and the artifact collection, and the administrative offices for the Historical Society. The historic Living Room, Dining Room, and the Lower Level (formerly the church hall) are available for event rentals.

The Yawkeys hired George W. Maher, a noted Prairie School architect from Chicago and a contemporary of Frank Lloyd Wright, to design the house in 1914. By then, he was in a transition period from Prairie School to more period styles. Maher also was the architect of the 1908 expansion and remodeling of the Yawkey House across the street.

The horizontal design is classic to the Prairie School style of architecture, although this house is built of brick rather than the more prevalent stucco. Notable Prairie School features found here are the sets of tall casement windows, broad eaves, hipped (no gables) roof, and stylized or abstract ornamentation. In this case, there are arches, lotus buds, leaves, cartouches (scrolls around ovals), and other decorative touches. Maher included a stone barrel-vaulted entrance, similar to other, simpler, brick homes he designed elsewhere in the city. He is one of few architects who designed everything if the client’s budget allowed; not only the building but also furniture and lighting fixtures, among other furnishings.