Toward the end of the 19th century and into the first decade of the 1900s, cotton production in the south was reaching its apex and many roads of cotton production convened in Waco. Farmers from the region gathered in Waco before shipping their products worldwide, and the 1894 Cotton Palace fair reflected the city’s dominance in the industry. In 1890, at the height of economic fervor and local investment in Waco, local stone contractor John Tennant decided to build himself a luxurious castle made of stone. Despite grandiose dreams, Tennant faced financial difficulties and abandoned the construction in 1908. Between 1908 and 1913, with the aid of local investors, Cottonland Castle (also known as “The Castle”) was completed. Over the course of the 20th century, the luxurious castle within the historic Castle Heights Neighborhood has fluctuated between disrepair and improvement, and it serves as an aesthetic and historic centerpiece of the neighborhood. Showcasing the past wealth stimulated by cotton production in Waco, Cottonland Castle endures as a prominent historic structure. It was recorded as a Texas Historic Landmark in 1977. In early 2019, it was bought by private residents who began the process of restoring it.

Cottonland Castle was built in 1913 after five years of construction. 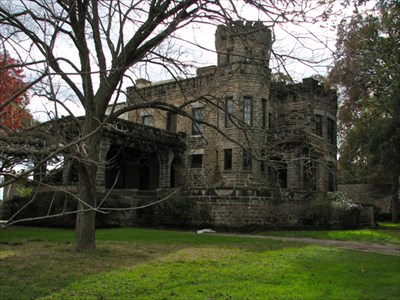 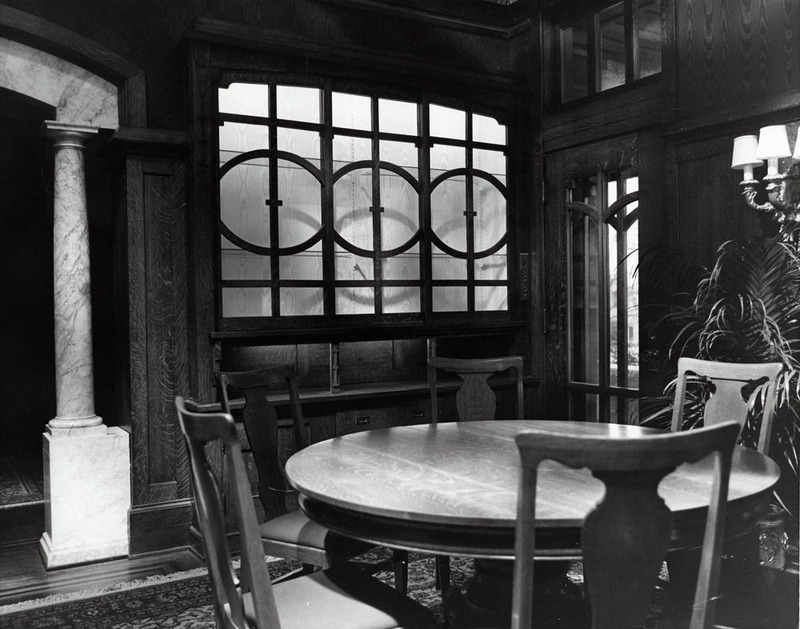 Historical Marker in front of the Castle 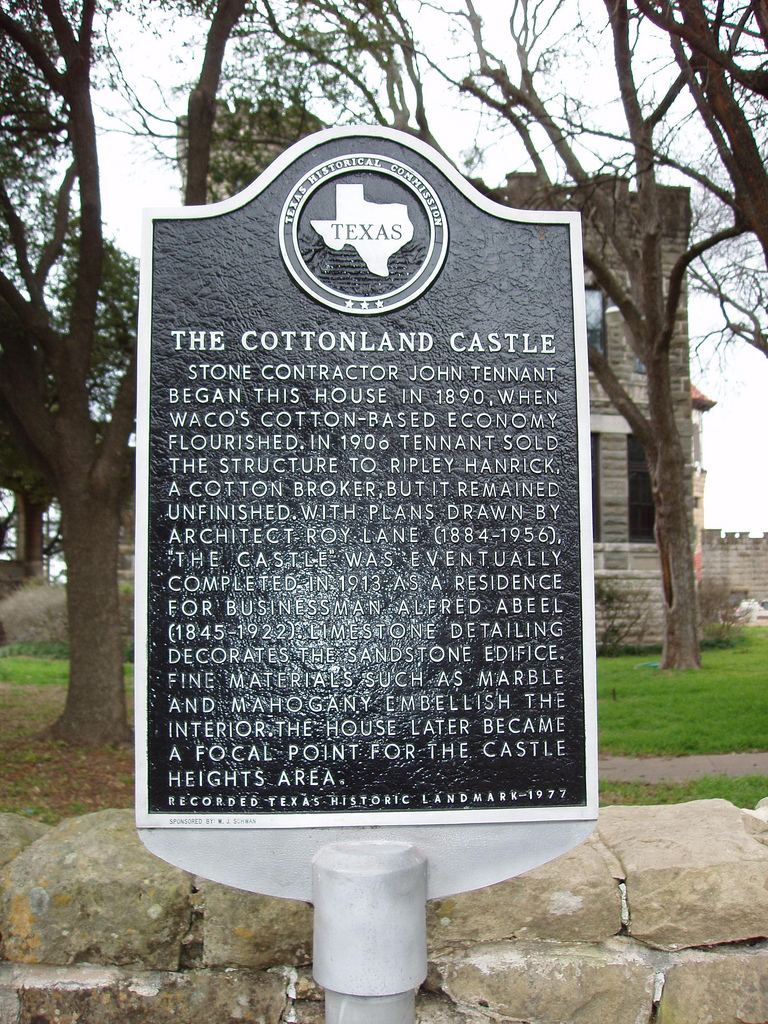 Construction and History of the Castle

The Bosque and Brazos rivers served as two of the most important elements that gave Waco its prominence and wealth. Since the end of the Civil War, these rivers ensured lush cotton production, eventually giving Waco the prestige of being the nation’s top cotton producer.

Cotton culture was the mainstay of Waco’s economy, and in 1894, plans were made to name Waco the “Texas Cotton Palace.” Consequently, many historical buildings and other grandiose structures in Waco reflected the enormous wealth brought by cotton.

In 1890, at the height of the cotton boom, local stone contractor John Tennant made a deal with banker J.W. Mann. The deal stated that Mann would give Tennant a plot of land in exchange for an obelisk in Oakwood Cemetery.

Using materials remaining from Tennant’s last project, the Provident Building, Tennant began constructing a castle. Up until 1906, however, Tennant was only able to construct the home’s foundation, basement, and an unframed structure. Unfortunately, Tennant’s dreams to live in a castle didn’t quite match his financial holdings, and he sold the house to cotton broker Ripley Hanrick. Tennant would continue to work on the castle until 1908, when further financial difficulties forced both men to abandon construction and sell the home.

Between 1908 and 1913, Lane convinced Civil War veteran Alfred Abeel to purchase the unfinished home, and by the end of 1913, Lane was able to successfully transform the frame into a German-gothic style castle complete with three stories, a basement, eight fireplaces, and a tower.

At the end of Lane’s construction, Cottonland Castle featured 6,600 square feet of living space marked by white sandstone interiors. Behind the 400-pound solid oak front door, the interior of the castle pays tribute to medieval design and culture, including a drawing room where the “lord” of the castle could withdraw as well as a large mantle over the fireplace designed to hold a mounted stag's head. The Castle Heights District, which took its name and inspiration from Cottonland Castle, developed and attracted newcomers by advertising the neighborhood as an “opportunity to the man who has been searching for the ideal site upon which to build the castle of his dreams.” The Castle Heights District later became Waco's first historic district recognized on the National Register of Historic Places.

Ownership of Cottonland Castle changed several times throughout the 20th century, and for a period it served as an auxiliary building for the Austin Avenue Methodist Church. The Castle became a Texas Historical Landmark in 1977.1

"Stone contractor John Tennant began this house in 1890, when Waco's cotton-based economy flourished. In 1906 Tennant sold the structure to Ripley Hanrick, a cotton broker, but it remained unfinished. With plans drawn by architect Roy Lane (1884-1956), "The Castle" was eventually completed in 1913 as a residence for businessman Alfred Abeel (1845-1922). Limestone detailing decorates the sandstone edifice. Fine materials such as marble and mahogany embellish the interior. The house later became a focal point for the Castle Heights area."