The Broadway Cemetery Historic District is a large, urban burial ground composed of seven separate cemeteries. Occupying six city blocks, the first plot was set aside in 1839. A vast collection of monuments, vaults, and stone markers punctuate the overall landscape of the cemetery complex and range in style from simple marble and granite headstones to impressive Classical Revival vaults, Gothic Revival mausoleum, and towering obelisks. 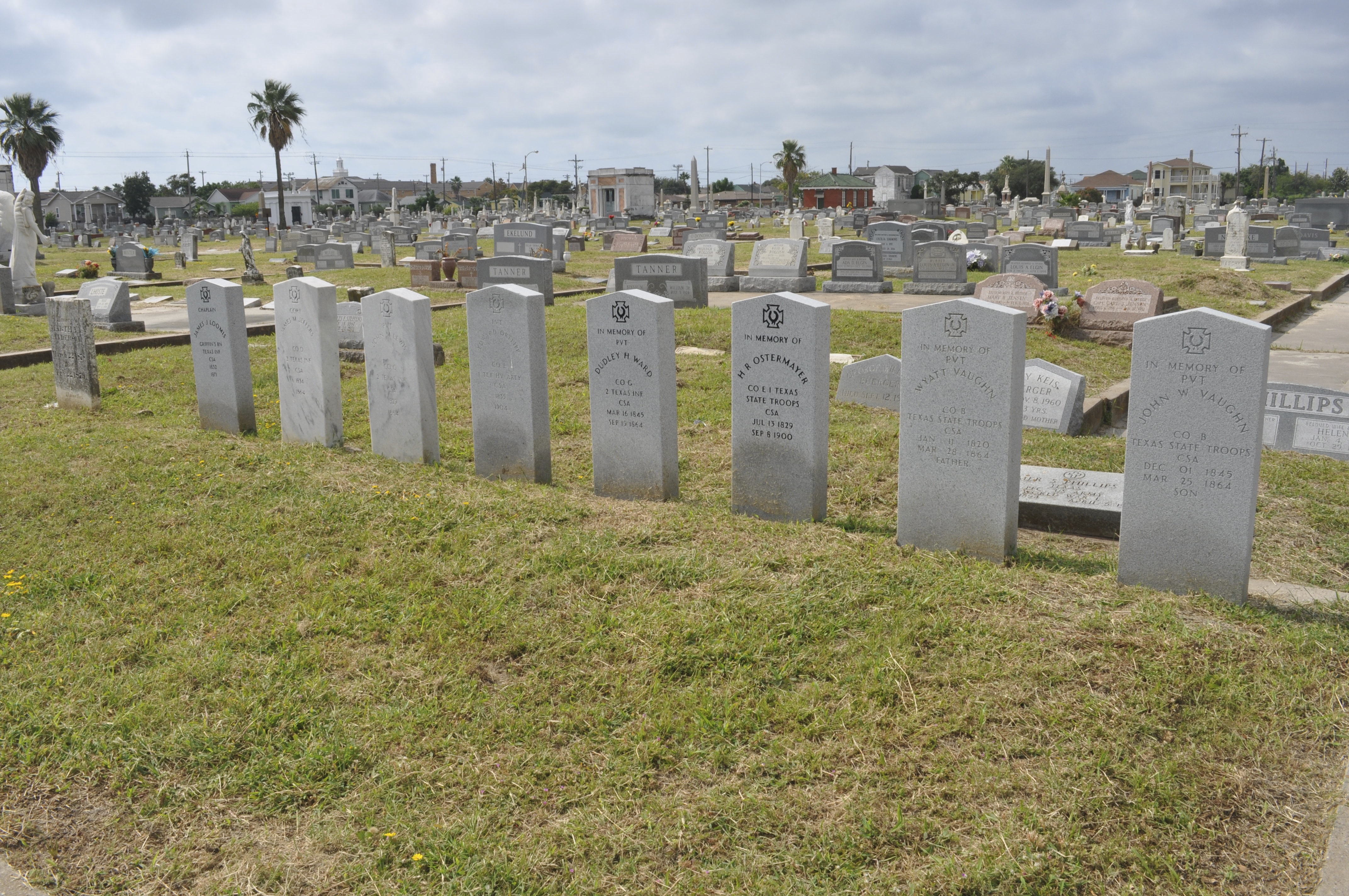 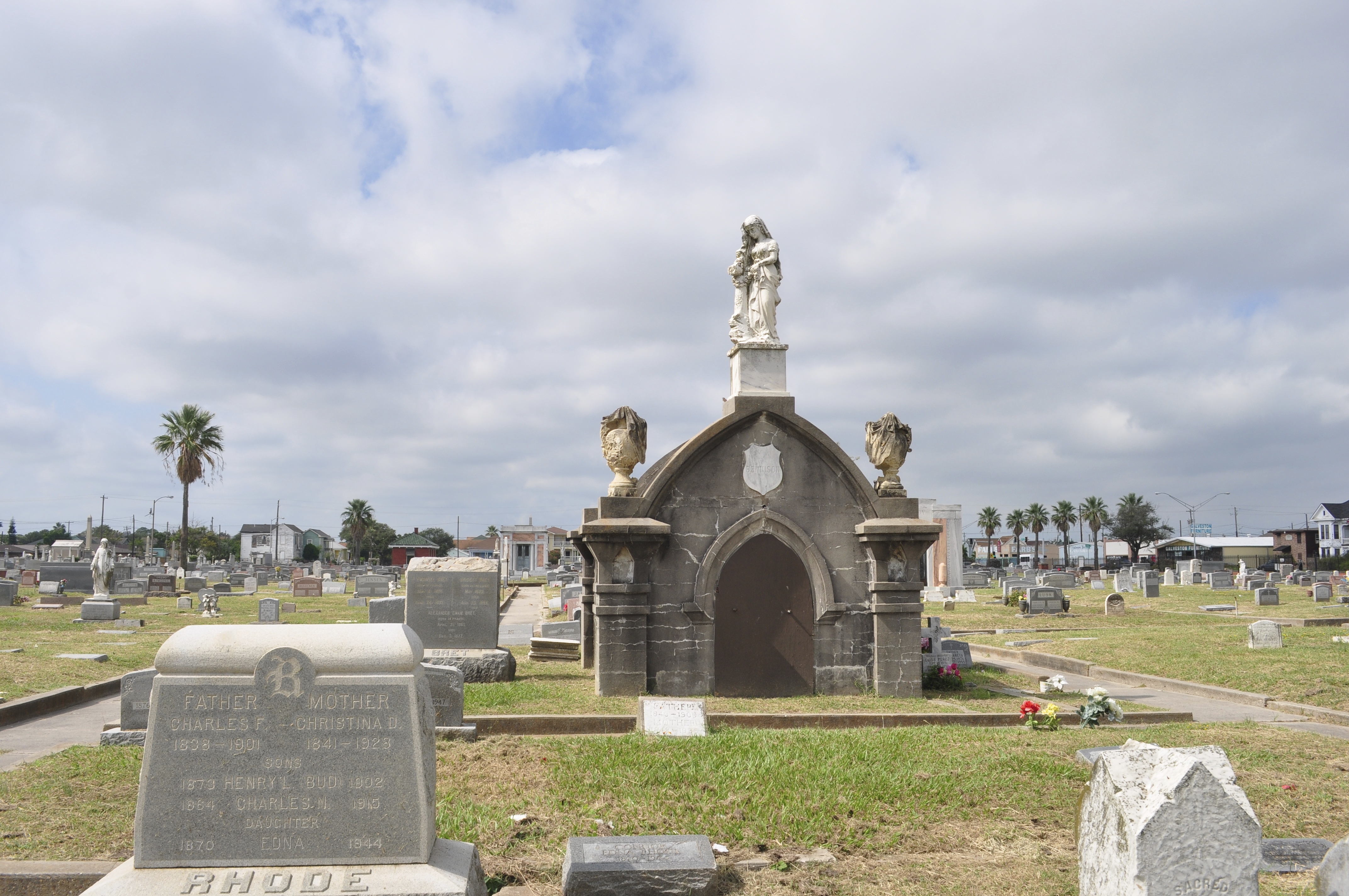 The Broadway Cemetery Historic District, which dates back to 1839, and its tombstone decoration, symbolism and inscriptions provide insight into the broader aspects of Galveston's history. Included are records of yellow fever epidemics, the Civil War, segregation, the devastating 1900 hurricane, and significant figures assocaited with the city, Texas and both the United States and Confederacy, to name a few items.
Inspired by an 1893 yellow fever epidemic, The Galveston City Company formally donated four city blocks (located away from the central part of the city) for use as a cemetery in July 1840. Numerous churches, of different denominations, managed different portions of the large cemetery, notably as it grew with time.
Galveston struggled during the Civil War, and the city itself saw numerous battles. Thus several Confederate and Union soldiers are interred within the Old City, Episcopal, and Old Catholic Cemeteries. Also, a monument to General Magruder and the Confederate forces of the Battle of Galveston erected by the United Confederate Veterans stands within the Episcopal Cemetery.1
Cemetery records provide evidence of broader aspects of Galveston's history. For instance, records point to yellow fever epidemics that routinely plagued inhabitants of Galveston. The first outbreak was recorded in the summer of 1839, followed by another in 1844 and 1858. The last and most devastating yellow fever epidemics occurred in Galveston during the summer and fall of 1867, when 725 residents died from the disease.2 Furthermore, records show that some African Americans were able to purchase plots in white cemeteries, but otherwise, they were limited to plots outside of town. In 1911, the Rosewood Cemetery Association formed, purchased property near the seawall, and established a cemetery for the city’s African American citizens. 3 Also, one of the deadliest natural disasters in the history of the United States occurred in Galveston on September 8, 1900; it is estimated the storm claimed at least 8,000 lives. Due to the high mortality rate, those residents who perished during the storm were largely subject to a mass burial at sea. However, two new cemeteries were created in part to memorialize the victims of the 1900 storm.
Since the Broadway Cemetery Historic District is composed of burial grounds dating from the earliest settlement period of the city of Galveston, those interred represent some of the most significant and influential individuals within the city’s history. In fact, the city’s founder, Michel B. Menard is buried in the southeastern portion of the Catholic cemetery. Galveston’s first mayor, Major John M. Allen, rests in the Episcopal Cemetery. As the only port west of Louisiana along the Gulf Coast, Galveston served as a center of commerce and trade for the Republic of Texas from 1836 until 1846. The first and last presidents of the Republic of Texas were originally interred within the cemetery complex, although both were removed and re-interred at the Lakeview Cemetery in Galveston and the Glenwood Cemetery in Houston, respectively.  As part of the Republic of Texas, Galveston served as residence to foreign ministers recognized by the Republic. Joseph Eve and General William S. Murphy, both United States’ Ministers of the Republic of Texas are interred in the Episcopal Cemetery. Two additional U.S. ministers, Colonels Alcee Branche and George Flood, are also buried within the complex.4
The cemetery, through the records, tombstones, and monuments, provides a lens through which one can look at the entire history of Galveston, aspects of the Republic of Texas, 19th-century economies heavily reliant upon on shipping ports, racial segregation, the Civil War, and numerous disasters.

Editor's Note: Much of the material provided above was taken from an extensive report provided to the National Parks Association. Please see the citation notes for the full source of this material.5