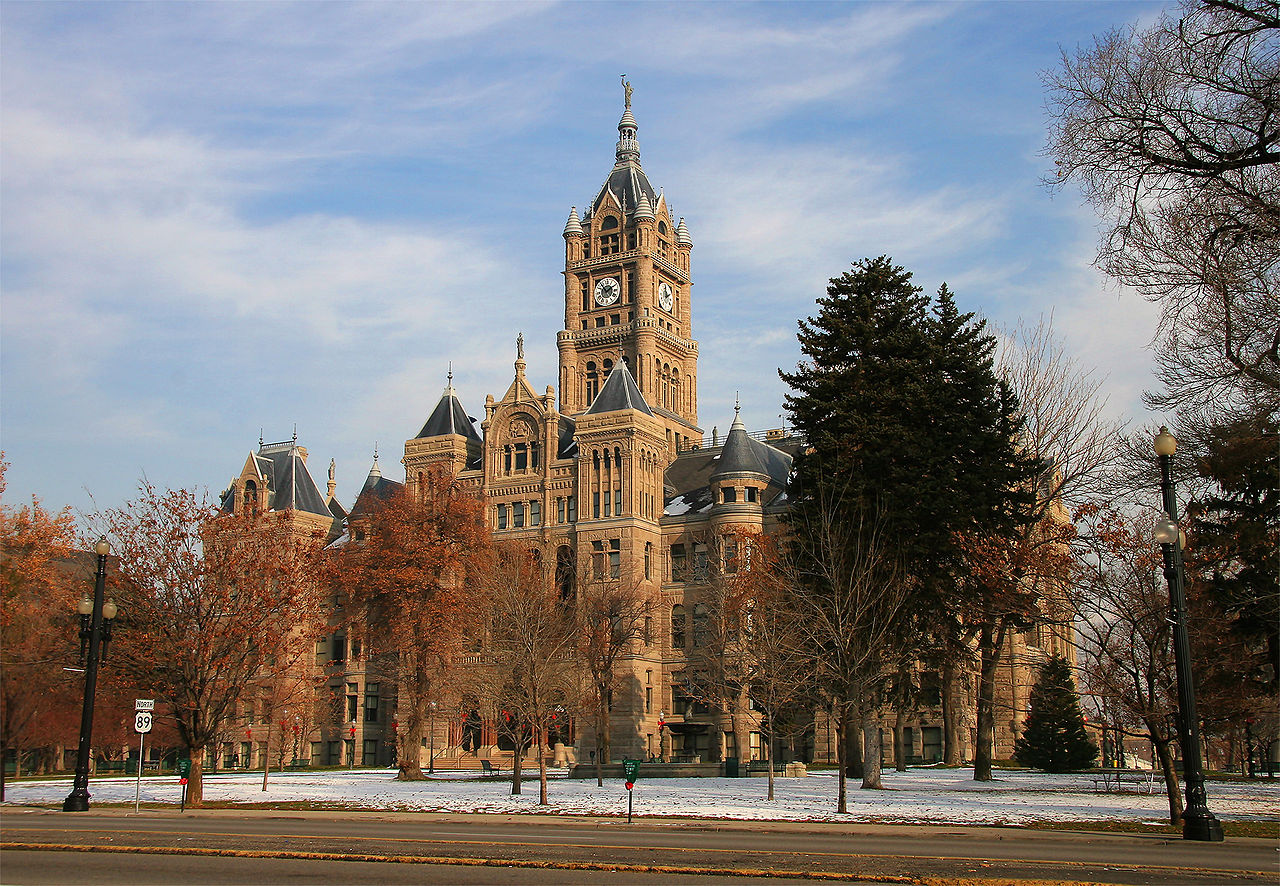 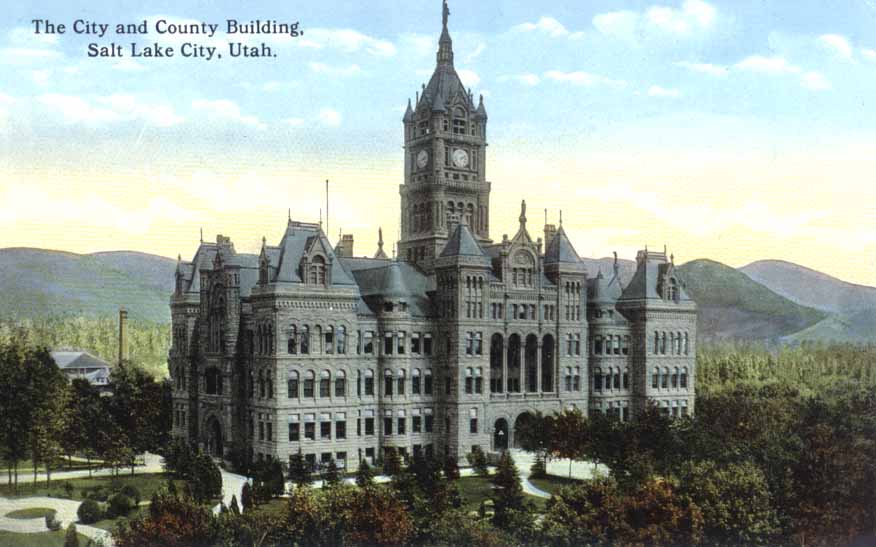 The City-County Building in 1897 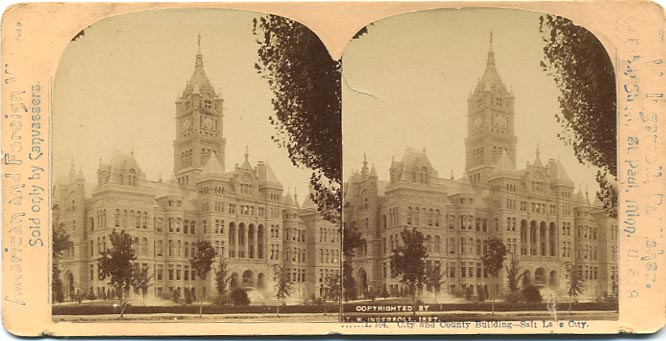 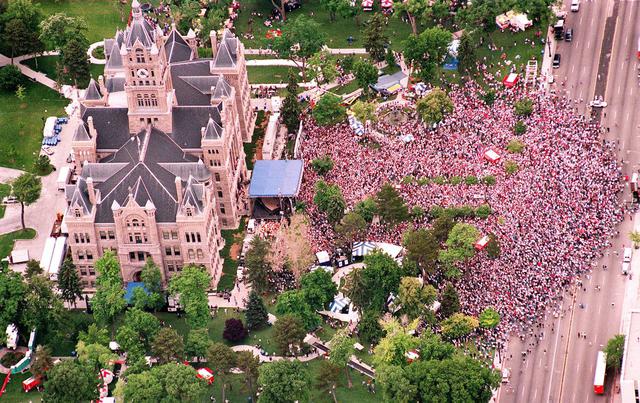 The construction of the building was riddled with controversy. During the late 19th and early 20th centuries the City and County Building was the symbol of non-Mormon citizens' open defiance of The Church of Jesus Christ of Latter-day Saints (LDS). It was designed to rival the Salt Lake Temple as the city's architectural centerpiece. It is even thought that the building's clock tower and statues were designed to mimic the temple's spires and the statue of the angel Moroni Ironically, the building was originally the 1880s brainchild of the Church-backed "People's Party" When the non-Mormon "Liberal" was campaigning for city government, they deemed the proposed "joint building" an example of the Church's extravagance and wastefulness. In a reversal of stance, the Liberals decided to go ahead with the building when they finally gained power in 1890. Construction began in February on State Street at about 100 South.

For unclear reasons, construction was halted that November after only the foundation had been laid. The mostly non-Mormon city council questioned the building plans which had been completed during the People's Party reign and wavered on how to proceed. The Deseret News complained that the Liberals were wasting taxpayer money. Ultimately, the original plans and site for the building were scrapped and the whole project was moved to the building's current location at Washington Square. The Deseret News claimed this move served the City Council, which owned property around the site and would profit from increased land values. Nonetheless, construction on new plans began by late 1891. The cornerstone was laid on July 25, 1892.

The architectural firm of Monheim, Bird, and Proudfoot designed the Richardsonian Romanesque building. Henry Monheim, a local architect since the 1870s, and George W. Bird and Willis T. Proudfoot of Wichita, Kansas established the firm in 1891 specifically to design the building. Their firm won a building design contest against fourteen other submissions. However, The Salt Lake Herald—another LDS-backed paper—claimed that the competition was a "pretentious fraud." Monheim, a Prussian immigrant, died one year into construction. Bird and Proudfoot moved to Philadelphia and Chicago respectively by 1896, so the City-County Building was their firm's only output.

The building was monstrously over budget. Estimated by the firm at $350,000, the winning contractor bid $377,978, but by the building's dedication on December 28, 1894, it had cost nearly $900,000. Complicating matters was the Panic of 1893 which cut Salt Lake City and County revenues nearly in half. As a result of this, plans for large stained glass windows for the building were discarded.

Although now used exclusively by the Salt Lake City government, the building originally served many functions. Salt Lake County offices called the structure home until the 1980s when the County elected to build a new complex at 21st South and State Street.

The building served as Utah's Capitol from when statehood was granted in 1896 until the present Utah State Capitol was completed in 1915. The Salt Lake City and County building also housed Salt Lake's first public library and contained courtrooms, including one that condemned organizer Joe Hill to death amid international attention in 1914.

From 1973 to 1989 the building was exhaustively renovated and repaired with an eye toward historical accuracy. This was done in concert with a seismic upgrade called base isolation that placed the weak sandstone structure on a foundation of steel and rubber to better protect it from earthquake damage.

Like other blocks in Salt Lake City's original grid, Washington Square is 10 acres. The Salt Lake City and County Building, alone in the center of the block, takes up relatively little space. Trees, walkways, and statues surround the building making Washington Square like a small park. Indeed, the block is often the site of fairs, concerts, and other activities.

One notable gathering happened on June 16, 1995 when 50,000 people congregated on the west side of the City-County Building to watch the International Olympics Committee pick the host city for the 2002 Winter Olympics live on large projection screens. When IOC chairman Juan Antonio Samaranch read the winning city—Salt Lake City—the crowd at Washington Square cheered loudly for minutes, drowning out the rest of Samaranch's words.

Many of Salt Lake City's cultural events take place at Washington Square, and often 200 East Street between it and Library Square is blocked off to create one large event plaza. Events that take place in this space include Utah Pride Festival, the Utah Arts Festival, and Salt Lake City Jazz Festival, and the Living Traditions Festival that celebrates all the different cultures that reside within the state. These occur once per year and usually run over the weekends.