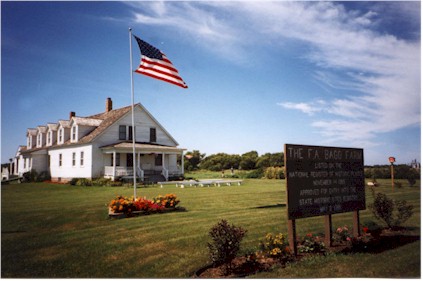 As with the history of westward expansion in America, the history of the bonanza farm begins with the coming of the railroad. In the mid-1860s, a group of entrepreneurs aspired to build a railroad across the northern territory to the Pacific Ocean. With millions of acres in government land grants and financing from Jay Cooke and his banking institution, the newly-formed Northern Pacific Railroad began construction. By 1872, the NP had crossed the Red River, entering present-day North Dakota.

Unfortunately, Jay Cooke went bankrupt a year later sending the NP, and the entire country, into a financial panic. To raise the money needed to continue the railroad, the NP allowed stockholders, who held deflated stock, to buy large tracts of land at a rate competitive with land sold by the government.

One man who took the NP's offer was J.F. Downing, an attorney and businessman from Erie, PA. Although no acreage figure has been determined in establishing the farm size necessary to constitute a bonanza farm, Downing's landholdings in North Dakota exceeded 9,000 acres, which certainly qualified his farm for bonanza status.

Bonanza farming was well established in the Mooreton area when F.A. Bagg jointed his uncle's 9,000 acre enterprise in 1886. Mr. Bagg spent his first year on the Downing Farm, working as a carpenter and field hand for twenty dollars per month plus board and room. The superintendent of the farm left in 1887 and Mr. Bagg was offered and accepted the position of superintendent of the farm.

Upon the death of Mr. Downing in 1913, Mr. Bagg inherited a quarter interest of the farm's holdings. In 1915, he moved his inheritance, which included land, buildings and machinery, one mile from the Downing farmstead and began his own Bonanza Farm.
Source:http://www.wahpetonbreckenridgechamber.com/visitor_bagg.htm