Also known as the Mormon Tabernacle, this structure was used by the LDS church as a location for their biannual General Conferences, musical programs by the famed multi-Grammy winner Mormon Tabernacle Choir and church services. Tours are conducted by missionaries assigned to Temple Square. The 700 pipe organ (expanded so much that it now contains 11,623 pipes), handcrafted in 1867, is a major tourist attraction. 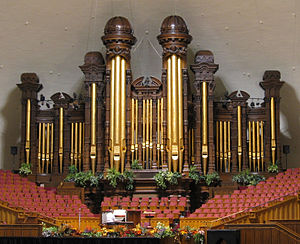 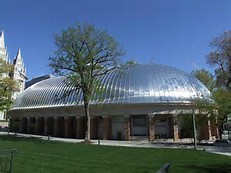 1870-1880s photo of men continuing to work on the Salt Lake City temple. The newly finished tabernacle sites in background 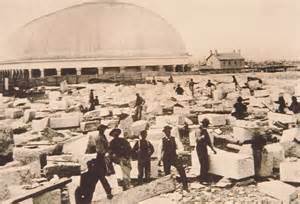 The tabernacle under construction circa 1866

Interior of the tabernacle 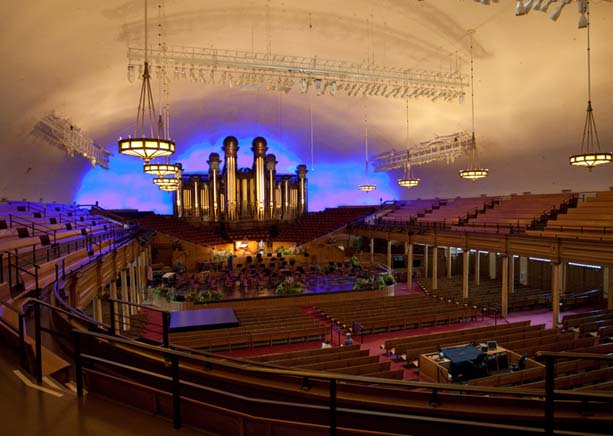 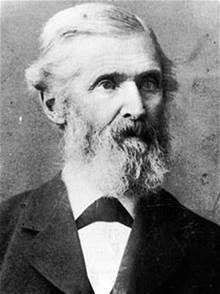 The Tabernacle was built to house meetings for The Church of Jesus Christ of Latter-day Saints (LDS Church), and was the location of the semi-annual LDS General Conference for 132 years. However, because of the growth in the number of conference attendees, this general conference was moved to the new and larger LDS Conference Center in 2000. In the October 1999 General Conference, church president Gordon B. Hinckley gave a talk honoring the Tabernacle and introducing the new Conference Center. Now a historic building on Temple Square, the Salt Lake Tabernacle is still used for overflow crowds during general conference. The Tabernacle is the home of the world-renowned Mormon Tabernacle Choir, and was the previous home of the Utah Symphony Orchestra until the construction of Abravanel Hall. It is the historic broadcasting home for the radio and television program known as Music and the Spoken Word. In 2005, the Tabernacle was closed for two years of intensive renovations that greatly increased its ability to withstand earthquakes. It was reopened and rededicated by Hinckley during the Saturday afternoon session of the church's general conference on March 31, 2007. The Museum of Church History and Art opened an extensive display on the Tabernacle as part of the rededication of the historic edifice.

The Tabernacle was built between 1864 and 1867 on the west center-line axis of the Salt Lake Temple. The roof was constructed in an Ithiel Town lattice-truss arch system that is held together by dowels and wedges. The building has a sandstone foundation, and the dome is supported by forty-four sandstone piers. The overall seating capacity of the building is around 7,000, which includes the choir area and gallery (balcony).

Henry Grow, an LDS civil engineer oversaw the initial construction of the Tabernacle, the domed roof being the most innovative portion of the building. Brigham Young, president of the LDS Church at the time, wanted the Tabernacle roof constructed in an elongated dome shape. When Young asked Grow how large a roof he could construct using the style of lattice that he had used on the Remington bridge, Grow replied that it could be "100 feet wide and as long as is wanted." Eventually, Grow engineered the Tabernacle roof to be 150 feet across and 250 feet long. Skeptics insisted that when the interior scaffolding was removed, the whole roof would collapse. The roof structure was nine feet thick, formed by a "Remington lattice truss" of timbers pinned together with wooden pegs. Green rawhide was wrapped around the timbers so that when the rawhide dried it tightened its grip on the pegs. When the roof's structural work was completed, sheeting was applied on the roof, which was then covered with shingles. The interior was lathed and then plastered; the hair of cattle was mixed with the plaster to give it strength.

Construction of the Tabernacle began on July 26, 1864, but construction of the roof did not begin until 1865 when all 44 supporting sandstone piers designed by William H. Folsom were in place. Grow rapidly built the roof structure from the center out, but encountered difficulty engineering the semicircular ends of the roof. This difficulty dragged structural work on the roof into fall of 1866 even as other parts of the roof were being shingled. However, Grow finished and shingled the entire roof by the spring of 1867, before the interior of the building was finished. The Tabernacle was first used for the October 1867 conference. The roof has lasted for over a century without any structural problems, though the shingles were replaced with aluminum in 1947.

The original benches and columnns supporting the balcony were made from the native "white pine" (Engelmann Spruce) that the Mormon pioneers found in the area. Because they wanted to "give their best to the Lord", they hand painted grain on the benches to look like oak and the pillars to resemble marble. During the renovations completed in 2007, the original benches were replaced with new oak pews, and legroom was increased from nine to 14 inches, causing an overall loss of capacity of 1000 seats.

The organ in the Tabernacle has the organ case positioned at the west end above the choir seats, and is the focal point of the Tabernacle's interior. The original organ was made by Joseph H. Ridges in 1867 and contained 700 pipes. The organ has been rebuilt several times with the total pipe count being 11,623, making the Tabernacle organ one of the largest pipe organs in the world. The current organ is the work of G. Donald Harrison of the Aeolian-Skinner organ company, and was completed in 1948. The organ was renovated and restored in 1989 with a few minor changes and additions. The largest 32-foot display pipes in the façade are made of wood and were constructed in the same manner as the balcony columnns.

The structure was an architectural wonder in its day, prompting a writer for Scientific American to comment on "the mechanical difficulties of attending the construction of so ponderous a roof." In 1882, while on a lecture tour of America, Oscar Wilde noted that the building had the appearance of a soup-kettle; he added that it was the most purely dreadful building he ever saw. Some visitors around the beginning of the 20th century criticized it as "a prodigious tortoise that has lost its way" or "the Church of the Holy Turtle," but Frank Lloyd Wright dubbed the tabernacle "one of the architectural masterpieces of the country and perhaps the world.

Built at a time before electronics and audio amplifiers, the Tabernacle was constructed with remarkable acoustic qualities so the entire congregation could hear sermons given there. The roof was constructed in a three-dimensional ellipse with the pulpit at one focus of the ellipse. The elliptical concept came from church president Brigham Young, who reportedly said that the design was inspired by "the best sounding board in the world ... the roof of my mouth." The elliptical design causes a large portion of the sound from the pulpit end of the building to be concentrated and projected to the focus at the opposite end of the building. Furthermore, the roof rests on sandstone piers around the outside, without any interior supports that would impede the sound waves.

Several years after the initial construction was completed, Truman O. Angell was brought in to further improve the building's acoustics, and was responsible for adding the gallery (balcony) in 1870 that resolved the outstanding acoustical issues. The building has an international reputation as one of the most acoustically perfect buildings in the world; it is common for LDS missionary tour guides to demonstrate the acoustic properties of the Tabernacle by dropping a pin on the pulpit or tearing a newspaper there, which can be heard throughout the building.

The Tabernacle was closed from January 2005 to March 2007 for seismic retrofitting and extensive renovations. The baptistry, which was located in the lower portion at the rear of the Tabernacle, was removed as part of the renovation. New gold leafing was applied to the visible organ pipes, the ceiling was repaired and repainted, new dressing rooms and a music library for choir members were created, three recording studios built underneath the main floor, the rostrum was remodeled to accommodate a secondary seating arrangement or a stage for performances, and all plumbing was replaced. The building was reopened in March 2007, and rededicated for use on March 31, 2007. An opening gala concert with the Tabernacle Choir was held on April 6–7, 2007.

As part of the renovation, all 44 piers that support the Tabernacle's roof were reinforced with steel bars, which were inserted into the piers from the bottom. The foundation of each pier was also reinforced with concrete. Steel boxes were used to connect trusses, and were also attached to the piers, clinched tight with structured steel.