The Battle of Natural Bridge was a battle during the American Civil War, fought in what is now Woodville, Florida, near Tallahassee, on March 6, 1865. A small band of Confederate troops and volunteers, mostly composed of teenagers from the nearby Florida Military and Collegiate Institute that would later become Florida State University, and the elderly, protected by breastworks, prevented Union forces (consisting of African-American soldiers of the United States Colored Troops) from crossing the Natural Bridge on the St. Marks River. This action prevented the Union from capturing the Florida capital and made Tallahassee the only Confederate capital east of the Mississippi River not to be captured by Union forces during the war. 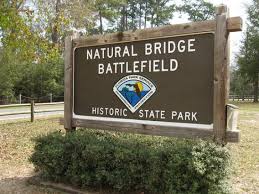 Federal troops initially pushed Rebel forces back but proved unable to take the bridge and retreated. 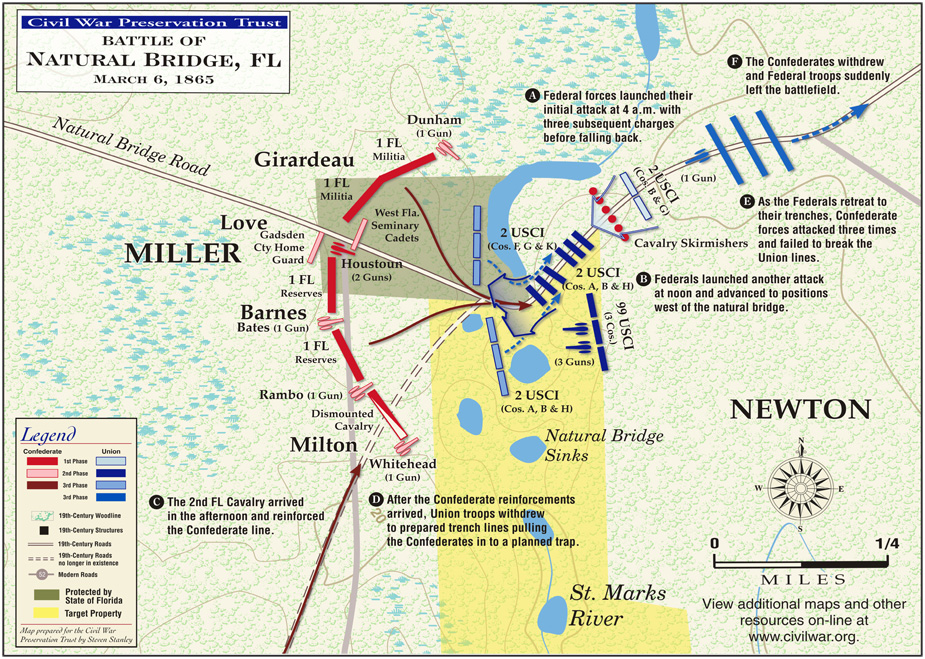 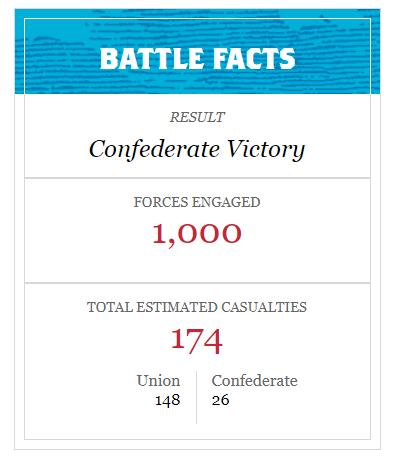 Natural Bridge is the site of the second largest Civil War battle in Florida and where the St. Marks River drops into a sinkhole and flows underground for one-quarter of a mile before reemerging. During the final weeks of the Civil War, a Union flotilla landed at Apalachee Bay planning to capture Fort Ward (San Marcos de Apalache Historic State Park) and march north to the state capital. With a timely warning, volunteers from the Tallahassee area - Confederate soldiers, old men and young boys - met the Union forces at Natural Bridge and successfully repelled three major attacks. The Union troops were forced to retreat to the coast and Tallahassee was the only Confederate capital east of the Mississippi not captured by the Union.

A reenactment of the battle is held at the park every first full weekend in March. A monument at the site honors the Confederate soldiers who defended Natural Bridge. There are picnic and fishing areas surrounded by woodlands for a comfortable place to relax and reflect back on Florida’s history. Guided tours are available upon request.

During the Civil War, most of the battles were fought in the South because the Union armies from the North pushed their way down into the southern territories to try to get them subdued and to restore the Union. As part of this, the Union army desired to take the capital of Florida in Tallahassee. Gaining this territory would have been an important win in a series of battles between the North and South. The plan was for the Union warships and transporters to land at Apalachee Bay, capture Fort Ward and march north towards Tallahassee, so they “assembled off the entrance to the St. Marks River under the cover of thick banks of fog” (Cox, Dale). The Naval commander succeeded in capturing the East River bridge but could not push up the shallow river to reach the next one. It was then that the Union army general forged ahead and “drove back Confederate defenders at East River Bridge but failed to dislodge an entrenched force guarding the Newport Bridge over the St. Marks River” (Cox, Dale), so the general and his troops headed upstream towards Natural Bridge as another port of entry.

Because of this delay, the Confederate army was able to get messages to the men in the area to help reinforce their troops and get them in place and prepared for attack. The Union troops attempted to cross Natural Bridge before dawn on March 6, 1865 and they succeeded in pushing Confederate troops back but not across the bridge, blocking the Union army from crossing the river. “The action at Natural Bridge lasted most of the day, but, unable to take the bridge, the Union troops retreated to the protection of the fleet.” (“Battle Of Natural Bridge”)

“The Union troops were forced to retreat to the coast and Tallahassee was the only Confederate capital east of the Mississippi not captured by the Union”.(Walker) This was a big win for the Confederacy because it protected Florida’s capital and all of the land in North Florida and southern Georgia from attack. Although this conflict only lasted about a day, it changed the outcome of the war and the fate of north Florida and South Georgia because the war never reached these areas leaving them intact.

At the time of this battle, the Civil War was nearing its end and Abraham Lincoln had just been inaugurated for his second term the day before. For three months before the Battle of Natural Bridge, the only wins had been on the Union side. Northern troops had been successful to capture parts of both North and South Carolina, and the Confederate army ranks were lean after so many years of hardships. (“Civil War Timeline”) The soldiers were a mixture of young and old volunteers and the men of the Confederate troops. “The forces were made up of wounded confederate soldiers’ home to recuperate, men as old as 70 and cadets as young as 14 from West Florida Seminary (now Florida State University)”. (“NATURAL BRIDGE BATTLEFIELD STATE HISTORIC SITE”) The soldiers had little sleep and were not prepared for a battle and had no prior knowledge to prepare themselves accordingly and were suddenly transferred to the front lines. The men were also unfamiliar with the area having been sent 70 miles away from home on a train. (“Civil War Timeline”) Interestingly, the Northern troops included 2 troops listed as U.S. Colored troops which seemed to intimidate the rebel fighters because they were not sure of the caliber of this different type of foe. (Josh, and Kathryn)

Although the park does not have its own website, it is included on websites that highlight state parks, American battlegrounds, southern history, and Florida memories. There is an online tour with pictures available at https://www.exploresouthernhistory.com/nbattletwo.html

Cox, Dale. The Battle of Natural Bridge, Florida - The Fight for Tallahassee, www.exploresouthernhistory.com/nbindex.html.

8am to sundown, every day of the year