Treasure of the Sea Exhibit

Housed within the Stephen J. Betze Library on Delaware Technical College's Jack F. Owen campus, the Treasure of the Sea Exhibit presents the artifacts found from two Spanish galleon shipwrecks located off the coast of Florida. The Nuestra Señora de Atocha and Santa Margarita ships were on the route from Havana, Cuba to Seville, Spain when they were destroyed and sunk in a hurricane on September 6, 1622. The wrecks were not found until the early 1980s treasure hunter Mel Fisher and several others found the wrecks and proceeded to recover the sunk artifacts. They found $4 million dollars worth of treasure: 1,000 silver bars, 180,000 silver coins, bronze canons, emeralds from South America, religious articles, and other items. Exhibits contain information about the 17th century Spain and its New World colonies. Guided tours are also available.

Entrance to the exhibit 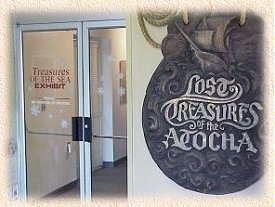 One of the bronze canons 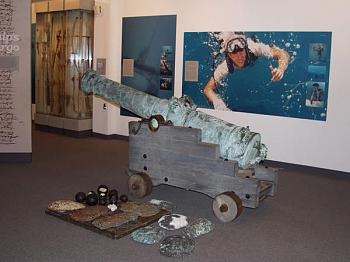