A local and regional history museum located in the Historic Village portion of DuPont. The building was constructed in 1910 and the Carsten’s Meat Market operated a meat market in the building until 1951. After the closure of the market the building was repurposed as the town’s first city hall. The closure of the DuPont Powderworks in 1976 people in town wanted a way to preserve the history the company had built in the town. City Hall moved to a new building, leaving the old one vacant. The city decided to repurpose the building again, leading to the opening of the DuPont Museum in 1977. 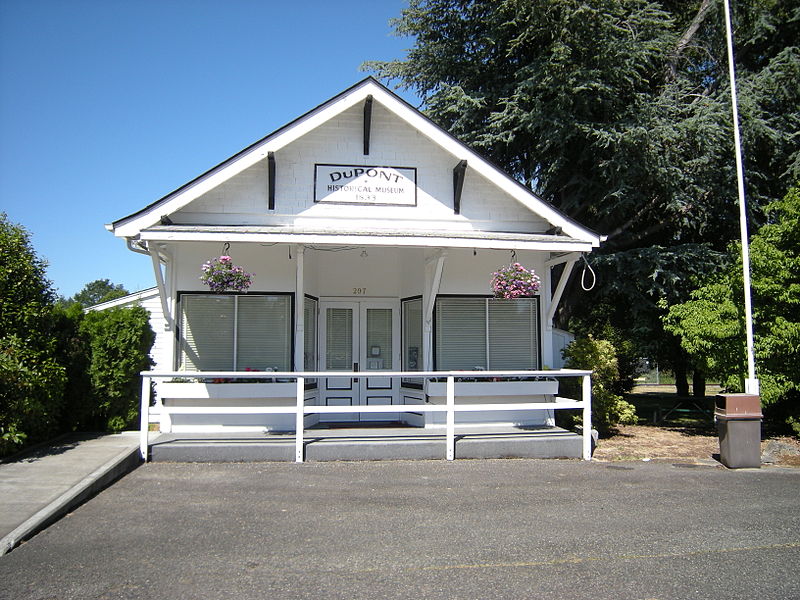 The building was built in 1910 by the DuPont company to serve as the town’s meat market. It was run by the Carsten’s meat market based out of Tacoma. It remained the meat market until 1951, business for the Carsten Brothers started to fall so they decided to close. That same year the DuPont Company decided to sell the homes in the village to employees as maintaining a company town was no longer necessary with increased travel. The town was then officially incorporated for the second time and the meat market was turned into the town’s city hall. Harry Robinson was voted as the inaugural mayor for this new era of the town. Beside the museum is Robinson Park, named after Mayor Robinson who served as mayor until 1967.

In 1976 the DuPont Company closed its dynamite plant to pursue other ventures. After the closure, DuPont’s City Council discussed ways to ensure that the history of the plant was preserved. Councilmember Lorraine Overmeyer was appointed as the lead to find the best way to do this. A formal committee was formed with Overmeyer as the Chairman, Ruth Iafratti as the Asst. Chairman, Eloise Hill as Treasurer, Ruth Bryans as secretary, and May Munyan and Wendell Laughbon as consultants. During this same time city hall was moved to a building on the campus of the recently shut down Laughbon High School, leaving the old city hall vacant. The committee put in a request to the city to use it as a museum which was accepted. On June 26, 1977 the DuPont Museum was opened to the public for the first time, displaying items that were donated by people in town and former employees. The next few years were spent making the building suitable for a museum, leading to an additional room being built on the back in 1982. Also, in 1982 an official non-profit was formed that signed a memorandum of understanding with the city to run the day-to-day of the museum while the city would be in charge of building repairs.

Today the museum has exhibits that explore the history of the DuPont area dating back 5700 years with the Nisqually Tribe up to the current day.