Known formally as the Memorial Building, the GAR Memorial Hall is a historic building located in downtown Topeka near the State Capitol. Although the building currently houses the State of Kansas Office of the Secretary State, Memorial Hall is significant as its construction was a dedication to the soldiers and sailors who fought in the Civil War. The building itself dates back to 1914, though movements to build a memorial began in 1908 by the Grand Army of the the Republic (GAR). It also stands as an excellent example of French Renaissance style architecture that was favored among government buildings during the early 20th century. From its construction in 1914 until 1995, Memorial Hall’s main purpose was to house the Kansas State Historical Society. It was added to the National Register of Historic Places in 1975. 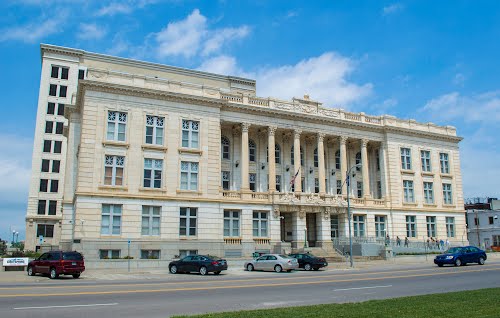 President Taft dedicating the cornerstone of the building, 1911 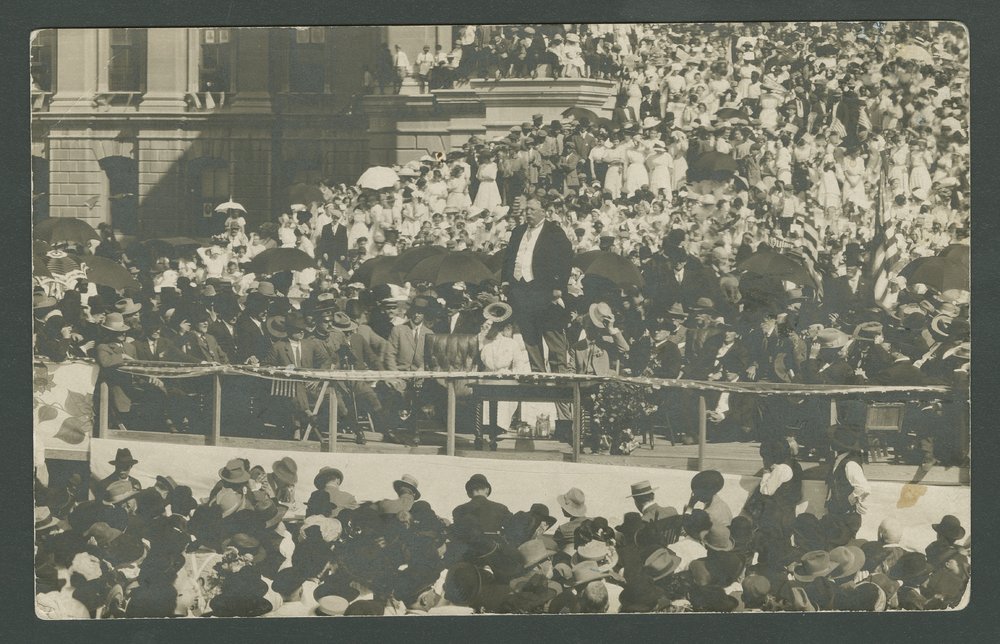 Brief History of the Grand Army of the Republic

The Grand Army of the Republic was a nationwide fraternal organization created by veterans of the Civil War. It was founded in Decatur, Illinois in 1866 by Benjamin F. Stephenson, and across the nation, membership to this organization was limited to discharged veterans of the Union Army, Navy, Marine Corps or the Revenue Cutter Service who had served between April 12, 1861 and April 9, 1865.

The group reached its peak membership in 1890 with over 490,000 veterans, and it dissolved in 1956 when the last surviving member of the Union Army, Albert Woolson, died.

Because of the large membership of this organization, with posts in mostly northern states though there were a few in southern states, GAR was a primary advocate in politics. In addition to promoting soldiers and sailors memorial sites (many of which were built in the 1880s and 1890s), GAR helped secure voting rights for black veterans, promoted patriotic education reforms, made Memorial Day a national holiday, lobbied Congress to establish pensions for veterans, and supported various Republican politicians in elections.

GAR’s influence was so widespread that the group helped elect several presidents, including Ulysses S. Grant, Hayes, Garfield, Harrison, and McKinley (all of whom were also Civil War veterans or members of GAR). In fact, Republican candidates could not even get presidential or congressional nominations without a GAR endorsement.1

History of the G.A.R. Memorial Hall

Bringing a monument honoring Civil War veterans to Topeka dates back to 1906, when Captain P.H. Coney of Kansas’s GAR branch suggested to the state to build a memorial crowned with a peace figure. Also at that time, the Kansas Historical Society, which had been operating out of the State Capitol building since 1876, declared that it was simply running out of space to house its vast collection of artifacts, documents, and other historical objects.

Another factor leading to the construction of Memorial Hall was the federal government’s payments to states that helped serve in federal wars. The State of Kansas’s war claims included $97,466 for equipping and sending soldiers to fight in the Civil War as well as $425,065 for rebelling Confederate soldiers and for helping with the Indian Wars. This totaled around $522,531, which in 1909 was equivalent to about $13,750,816 today.

There was overwhelming favor among Kansas citizens to use that money for a memorial building. The GAR Council of Administration then adopted a resolution stating, “the erection of a building as a memorial to the memory of the soldiers of the war for the Union, a portion of said building to be used as a headquarters for the department of Kansas Grand Army of the Republic so long as the organization may exist, (and) the rest of the building to be used by the Kansas State Historical Society.”

In 1909, the Memorial Hall Building Commission was created and the State of Kansas gave $200,000 for its construction (in the end, the state would give $400,000). Two years later in 1911, President William Howard Taft visited Topeka to lay the cornerstone, which featured an inscription that read, “Erected by the State of Kansas as a Memorial to the Union Soldiers and Sailors of the War of the Rebellion.”

A dedication ceremony was held in 1914 at the building’s completion, and around 25,000 people came to the ceremony. The GAR Commander, John N. Harrison, detailed the building’s significance and philosophy at this ceremony, saying, “It’s magnificent walls of pure white marble are more eloquent than articulate speech — its very silence is impressive far beyond and above the words of man, for it assures my comrades living, that my comrades living and dead, are held in sacred memory by the great, patriotic liberty-loving people of Kansas.”

From 1914 to 1995, Memorial Hall stood as the headquarters of the Kansas State Historical Society. In 2000, however, a re-dedication was held, christening the building as the home of the Kansas Attorney General and Kansas Secretary of State.2