Battle of the Aleutian Islands

The only WWII battle to take place on U.S. soil occurred in the Aleutian Islands. The Japanese Army invaded the islands of Attu and Kiska in June 1942 wth the hopes of diverting the U.S. Navy away from the Midway Islands. The National Park Service established a historic area in Unalaska near the airport. Several remnants such as pillboxes are leftover reminders of the feirce battle that was fought here. 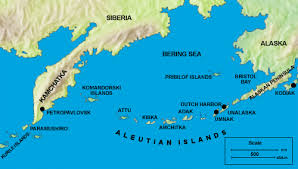 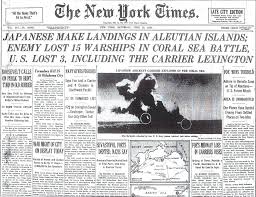 It was six months after Pearl Harbor the Japanese targeted the Aleutians. The Aleutians are chain of remote, sparsely inhabited, volcanic islands extending some 1,200 miles west of the Alaskan Peninsula. Once the Japanese arrived on June 3rd they conducted air strikes on Dutch Harbor, which housed two American Military bases. The Japanese then moved to Kiska Island on June 6 and Attu Island, approximately 200 miles away, on June 7.

When Americans heard that Japanese troops had taken over any U.S. soil, many where in shock that such a act had even occurred.  Some feared that this was the first step in an attack against mainland Alaska or even the U.S. Northwest. Despite the nationwide attention the Aleutians were getting, American war planners paid relatively little attention to the Japanese garrisons at Attu and Kiska. Due to process of building up forces in the South Pacific and preparing for war in Europe. In fact, the U.S. military conducted only occasional bombing raids from nearby Aleutian Islands. But by January 1943, U.S. Army forces in the Alaska Command had grown to 94,000 soldiers, with several bases constructed on other Aleutian Islands. On January 11, troops from the Alaska Command landed on Amchitka Island, only 50 miles from Kiska.

By March 1943, U.S. Navy Admiral Thomas C. Kinkaid had blockaded Attu and Kiska to restrict the flow of supplies to the Japanese on the islands. On March 26, 1943, Japanese ships in the Bering Sea attempted to deliver supplies and reinforcements to Attu. However, they were spotted by U.S. vessels patrolling the area and the two sides soon engaged in what became known as the Battle of the Komandorski Islands. Although the outnumbered U.S. fleet emerged victorious, the Japanese fleet inflicted serious damage on Kinkaid’s fleet. The Japanese withdrew in fear of American bombers as well as running low on fuel and ammunition. The now isolated Japanese soldiers on Attu and Kiska, were reduced to meager supplies sporadically delivered by submarine.

Before landing troops, the Americans bombed Attu and Kiska for several weeks before the U.S. military began Operation Landgrab on May 11, 1943, landing 11,000 troops on Attu. Higher command expected the operation to take no more than several days, but due to harsh weather and rugged muddy terrain, combat carried on for more than two weeks. The Japanese troops, greatly outnumbered, had withdrawn to high ground rather than contest the initial landings. It is important to note that the U.S. soldiers, were ill-equipped for the harsh weather conditions suffered more casualties from frostbite, trench foot, gangrene and other illnesses rather than enemy fire.

The fate of the Japanese had been sealed when the Americans established air and naval supremacy over the island. Since no supplies could make it to the Japanese forces on the island cutting the last remaining Japanese troops were starving and had insufficient ammunition when eventually the U.S. troops trapped them in a corner of the island towards the end of May. The Japanese commander, Colonel Yasuyo Yamasaki, decided to make one final frontal charge. The next morning on May 29, he and his soldiers enacted one of the largest banzai charges of the war in the Pacific. The charge ultimately failed. After the final attack on May 30, U.S. soldiers counted more than 2,000 Japanese dead, including Yamasaki. The American losses totaled around 1,000 men in the retaking of Attu. Within two days, U.S. forces secured the island and the Battle of Attu, the only land battle fought on American soil in World War II, was over.

After Attu, in preparation for Kiska the American commanders made sure that their soldiers had better equipment and proper clothing for the upcoming assault. Which was later named Operation Cottage. Intelligence at the time reported that a much larger force on Kiska compared to what they faced at Attu. When the U.S. arrived at Kiska on August 15, 1943, 35,000 soldiers landed with no opposition. After several days of patrolling the island, they discovered that the Japanese had evicted the island several weeks earlier, with the aid of the fog. On August 24, when U.S. troops declared Kiska Island secure, the Battle of the Aleutian Islands ended.

Following its defeat in the Aleutians, the Japanese navy reassigned some of its Pacific forces to defend Japan’s northern flank against a possible American invasion from the Alaskan Peninsula. This decision ultimately took vital players out of the fight against the Americans in the South Pacific. To fuel Japan’s paranoia American planes in the Aleutians conducted occasional bombing raids against Japan’s Kuril Islands, which lie between Japan and Alaska.

Two years after the Battle of the Aleutian Islands, Japan formally surrendered to the Allies on September 2, 1945, effectively ending World War II.