On this location, April 15, 1862, the western-most battle of the Civil War was fought in modern-day Picacho Arizona. At the time, Arizona was part of the New Mexico Territory. The Confederate victory has been considered the 'high-water mark' of the Confederacy in the West, even though this is also considered a minor battle. Despite the victory, the Confederacy would still lose the territory before the end of the Civil War (during 1863 the New Mexico Territory was split in half, the Union forming the Arizona Territory from the left half of the original territory). 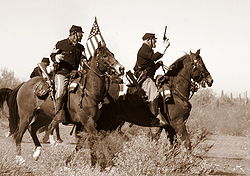 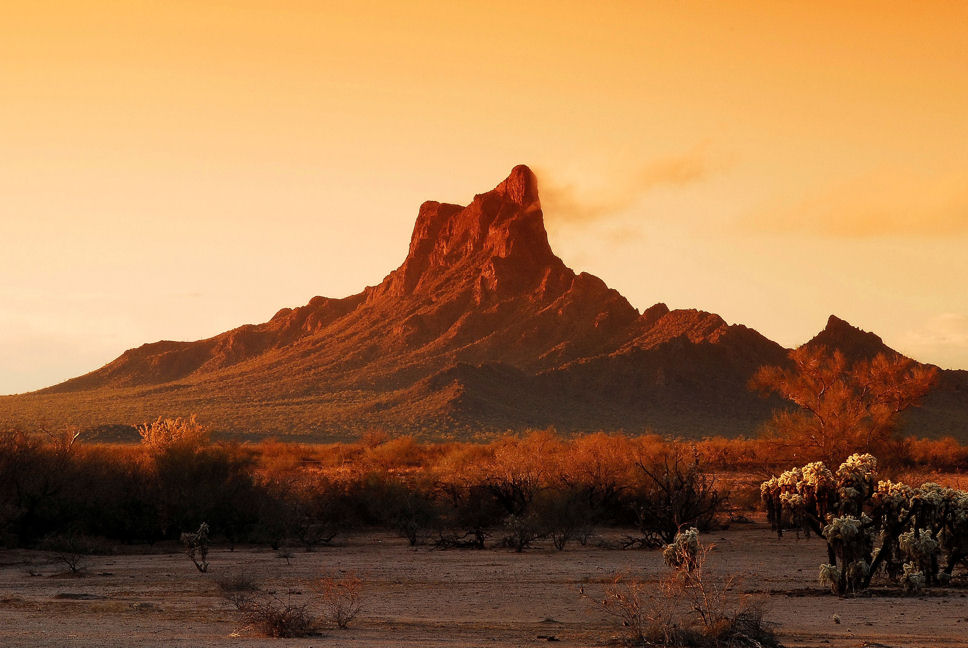 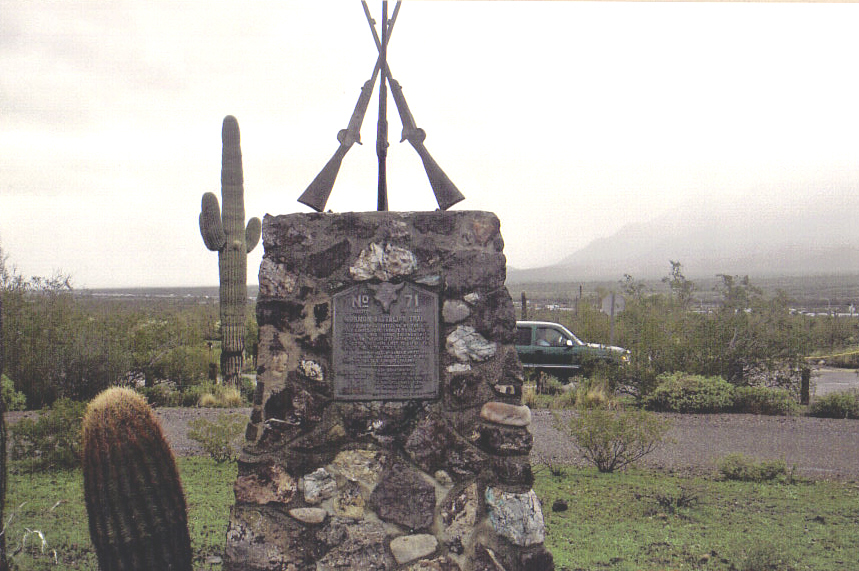 Diorama of battle showing movements and flow of battle.

Another scene from 2007 reenactment 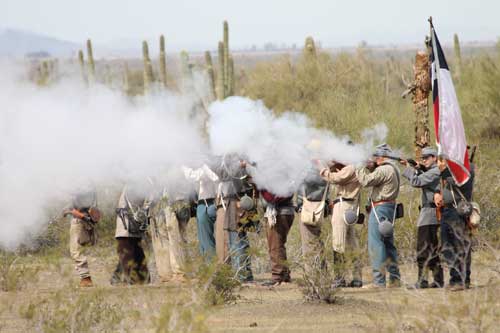 Monument to the Union dead of Picacho Pass erected in 1929 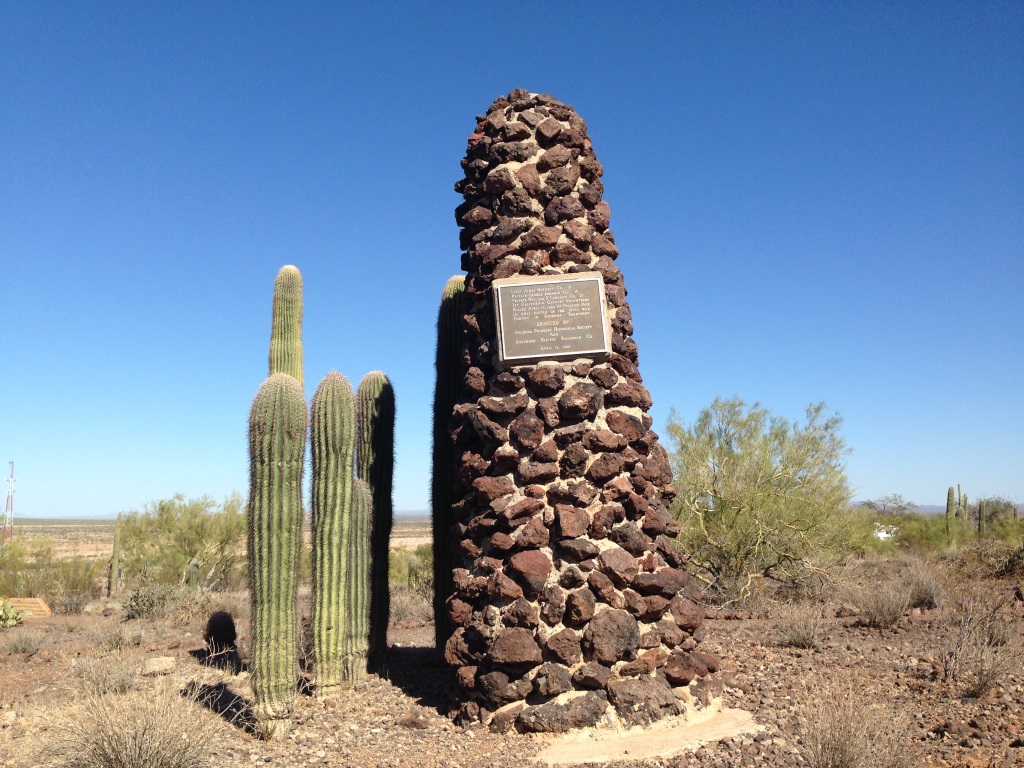 After a Confederate force of about 120 cavalrymen arrived at Tucson from Texas on February 28, 1862, they proclaimed Tucson the capital of the western district of the Confederate Arizona Territory, which comprised what is now southern Arizona and southern New Mexico. Mesilla, near Las Cruces, was declared the territorial capital and seat of the eastern district of the territory. The property of Tucson Unionists was confiscated and they were jailed or driven out of town. Confederates hoped a flood of sympathizers in southern California would join them and give the Confederacy an outlet on the Pacific Ocean, but this never happened. California Unionists were anxious to prevent this, and 6,000 Union volunteers from California, known as the California Column and led by Colonel James Henry Carleton, moved east to Fort Yuma, California, and by May 1862 had driven the small Confederate force back into Texas.
Like most of the Civil War era engagements in Arizona (Dragoon Springs, Stanwix Station, and Apache Pass) Picacho Pass occurred near remount stations along the former Butterfield Overland Stagecoach route, which opened in 1859 and ceased operations when the war began. This skirmish occurred about one mile northwest of Pichaco Pass Station.

Twelve Union cavalry troopers and one scout (reported to be mountain man Pauline Weaver but in reality Tucson resident John W. Jones), commanded by Lieutenant James Barrett of the 1st California Cavalry, were conducting a sweep of the Picacho Peak area, looking for Confederates reported to be nearby. The Arizona Confederates were commanded by Sergeant Henry Holmes. Barrett was under orders not to engage them, but to wait for the main columnn to come up. However, "Lt. Barrett acting alone rather than in concert, surprised the Rebels and should have captured them without firing a shot, if the thing had been conducted properly." Instead, in mid-afternoon the lieutenant "led his men into the thicket single file without dismounting them. The first fire from the enemy emptied four saddles, when the enemy retired farther into the dense thicket and had time to reload ... Barrett followed them, calling on his men to follow him." Three of the Confederates surrendered. Barrett secured one of the prisoners and had just remounted his horse when a bullet struck him in the neck, killing him instantly. Fierce and confused fighting continued among the mesquite and arroyos for 90 minutes, with two more Union fatalities and three troopers wounded. Exhausted and leaderless, the Californians broke off the fight and the Arizona Rangers, minus three who surrendered, mounted and carried warning of the approaching Union army to Tucson. Barrett's disobedience of orders had cost him his life and lost any chance of a Union surprise attack on Tucson.
The Union troops retreated to the Pima Indian Villages and hastily built Fort Barrett (named for the fallen officer) at White's Mill, waiting to gather resources to continue the advance. However, with no Confederate reinforcements available, Captain Sherod Hunter and his men withdrew as soon as the Column again advanced. The Union troops entered Tucson without any opposition.
The bodies of the two Union enlisted men killed at Picacho (George Johnson and William S Leonard) were later removed to the National Cemetery at the Presidio of San Francisco in San Francisco, California. However, Lieutenant Barrett's grave, near the present railroad tracks, remains undisturbed and unmarked. Union reports claimed that two Confederates were wounded in the fight, but Captain Hunter in his official report mentioned no Confederate casualties other than the three men captured.

Before this engagement a Confederate cavalry patrol had advanced as far west as Stanwix Station, where it was burning the hay stored there when it was attacked by a patrol of the California Column. The Confederates had been burning hay stored at the stage stations in order to delay the Union advance from California. About the same time as the skirmish at Picacho Peak, a larger force of Confederates was thwarted in its attempt to advance northward from Santa Fe, New Mexico, in the Battle of Glorieta Pass. By July the Confederates had retreated to Texas, though pro-Confederate militia units operated in some areas until mid-1863. The following year, the Union organized its own territory of Arizona, dividing New Mexico along the state's current north-south border, extending control southwards from the provisional capital of Prescott. The encounter at Picacho Pass may have been only a minor event in the Civil War, but it can be considered the high-water mark of the Confederate West.

Hart, Herbert M. "The Civil War in the West". California and the Civil War. The California State Military Museum. Retrieved 20 December 2011. The Arizona Republic, Skirmish in the Desert, Saturday March 14, 2015, page D1 and D2 Masich, Andrew E., The Civil War in Arizona; the Story of the California Volunteers, 1861-65; University of Oklahoma Press (Norman, 2006).