Port Gamble, located on a bay of the same name on Hood Canal, is one of the only surviving examples of a nineteenth century company town. It traces its roots back to the arrival of San Francisco timber entrepreneurs Josiah Keller, William Talbot, Andrew Pope, and Charles Foster in 1853, just months after Washington gained territorial status. Their succession of mills remained in operation until 1995, and many of the New England-style homes and stores that once served Port Gamble workers are now being restored

This company town was founded in 1853, and ran the longest running timber mill in the US, which just closed in 1995. 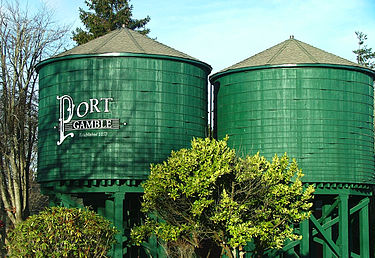