This monument, erected in 1933, is dedicated to the history of the Buckeye Station (about 600 acres in size) in a location known as Hurricane Hill. Buckeye Station, built in 1797, was the name given to the home of Nathaniel Massie, and later, in 1807, his brother-in-law Charles Willing Byrd. Both men were prominent figures in the history of Ohio and the United States in general. 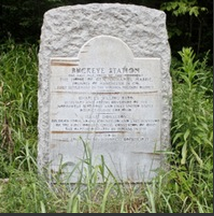 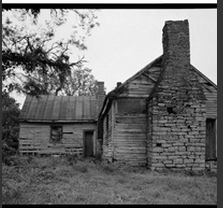 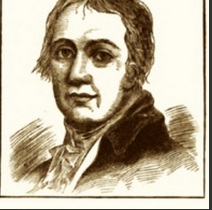 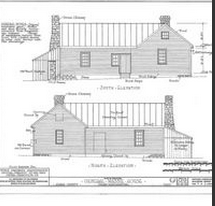 This monument is a testament to the historical significance of Buckeye Station, which no longer stands, and its surrounding region. Hurricane Hill was given its name due to the high winds it experienced. It is a picturesque region with exceptional views of the Ohio River Valley and the hills of Kentucky.

The home site was well-documented in 1936 due to the extreme disrepair of the property. The estate was named Buckeye Station because buckeye wood was plentiful in the area. The wood from was used for furniture, log houses, and other household items because it was easy to split and durable. The nuts of the tree are dark brown with a light brown spot and are thought to look like the eye of a deer, or a "buck eye".

Nathaniel Massie founded Manchester, Ohio, which was the first American settlement in the Virginia Military District. Nathaniel used Manchester as his home base as he moved deeper into the beautiful region. As was the custom, Massie received a portion of the land he surveyed in payment for his work. Eventually, he became a large landowner. Nathaniel Massie also founded Chillicothe, Ohio, which was the capital of Ohio twice.

Charles Willing Byrd served as North-West Territorial Secretary from 1799 to 1803 and as Acting Governor from November 1802 until March 1803, when Ohio became a state. He was appointed the first judge of the Federal District Court of Ohio by President Thomas Jefferson and served until 1828.

Byrd and Massie both served in the constitutional convention and each man voted to continue the Congressional ban on slavery.