Yates Mill has its origins in a mill that began operating on this site in the 1750s. Today, it is the last mill standing of approximately 70 that existed over the decades in what is now Wake County. The original mill was built by Samuel Pearson and owned by him and his heirs until 1819. The mill changed ownership several times until 1863, when it became the property of the Yates family, which owned it until 1947. Yates Mill was acquired by a corporation under the direction of A.E. Finley and last operated to grind corn in 1953 or so, then sold to North Carolina State University in 1963. The mill stood vacant for many years until local history lovers formulated plans to restore the mill, incorporating as Yates Mill Associates in 1989. Yates Mill is an outstanding example of the automated milling system patented by Oliver Evans in 1790. It has been restored to what we believe was its operational state during the mid-1800s, with complete corn and wheat grinding machinery. 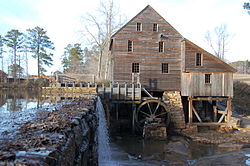 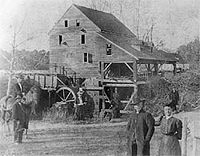 Plaques outside of the mill showing its adoption to the National Register of Historic Places. 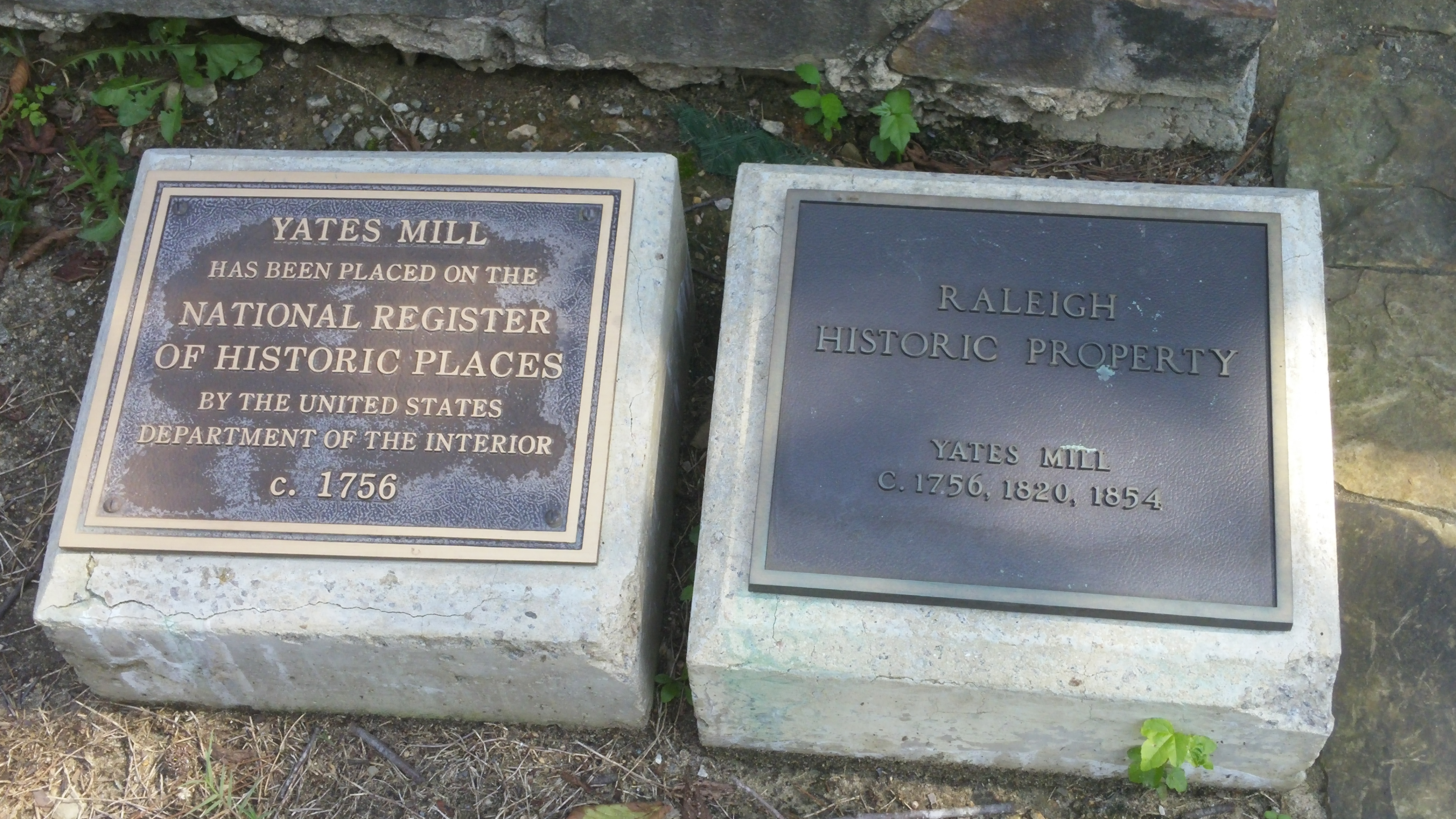 Mill gears and machinery located en route to the mill. Stone reads "In recognition of the Wake County Historical Society for its efforts in 1989 to initiate the preservation and restoration of Yates Mill" 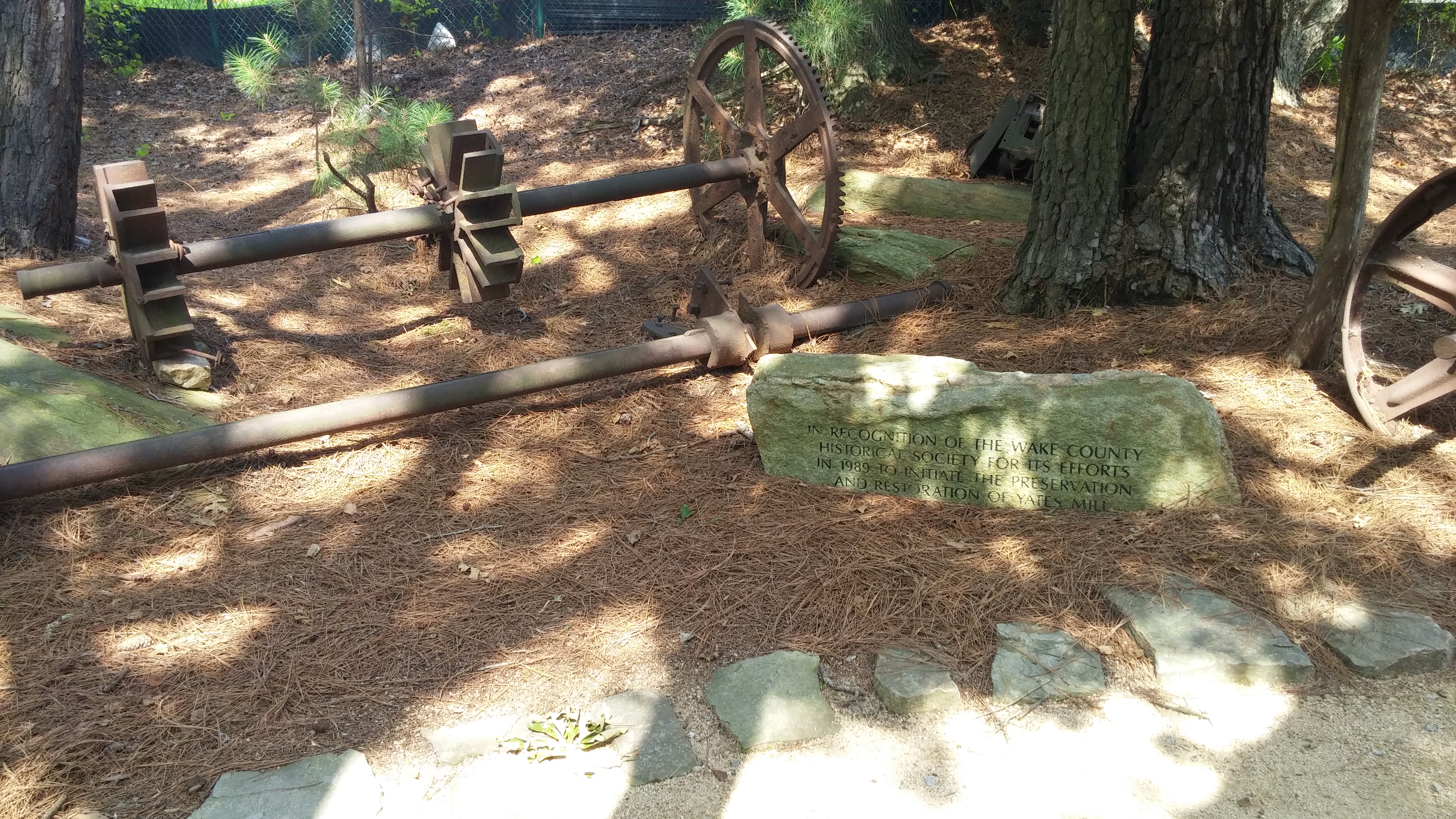 An assortment of millstones once used at Yates Mill. 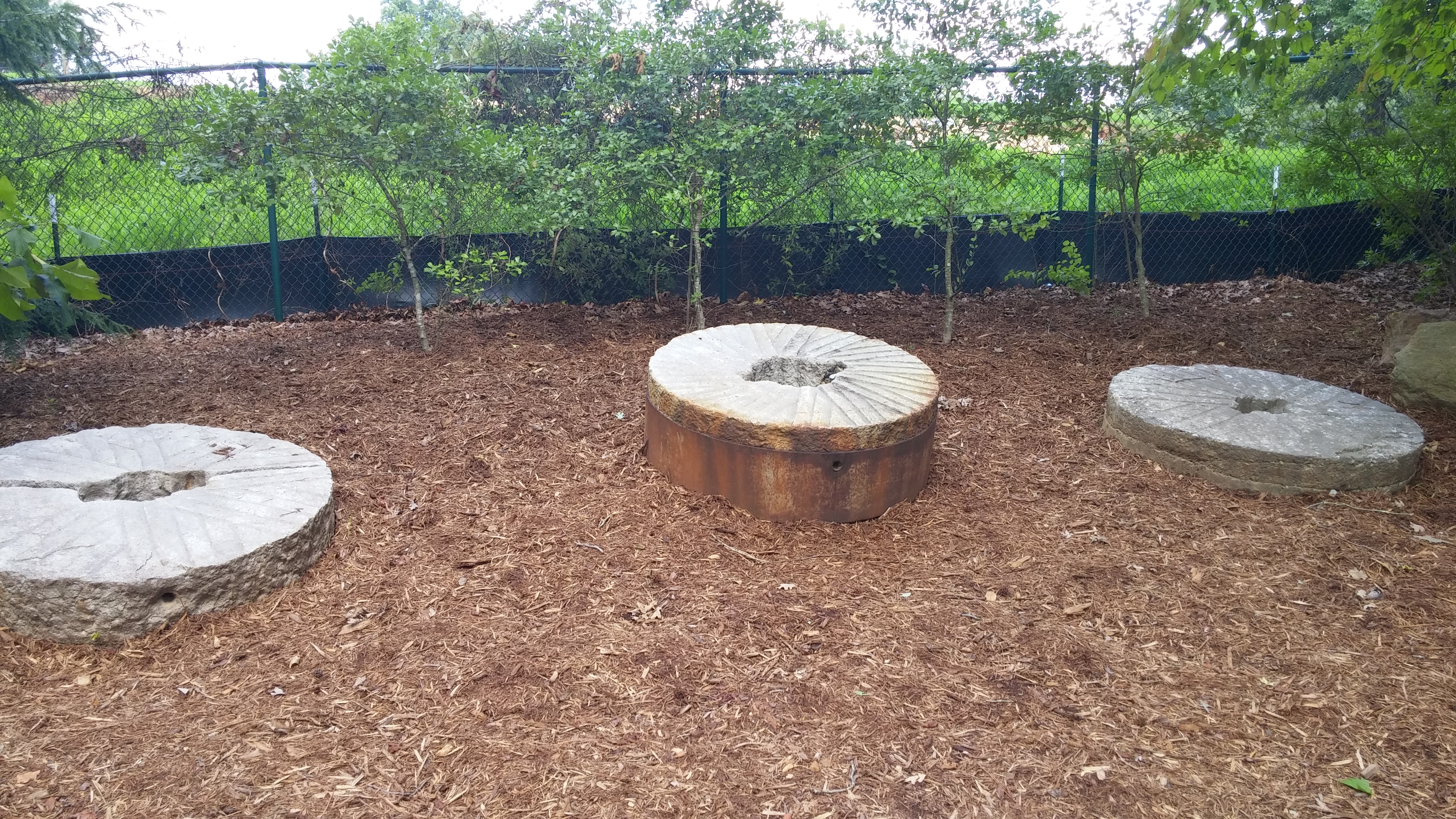 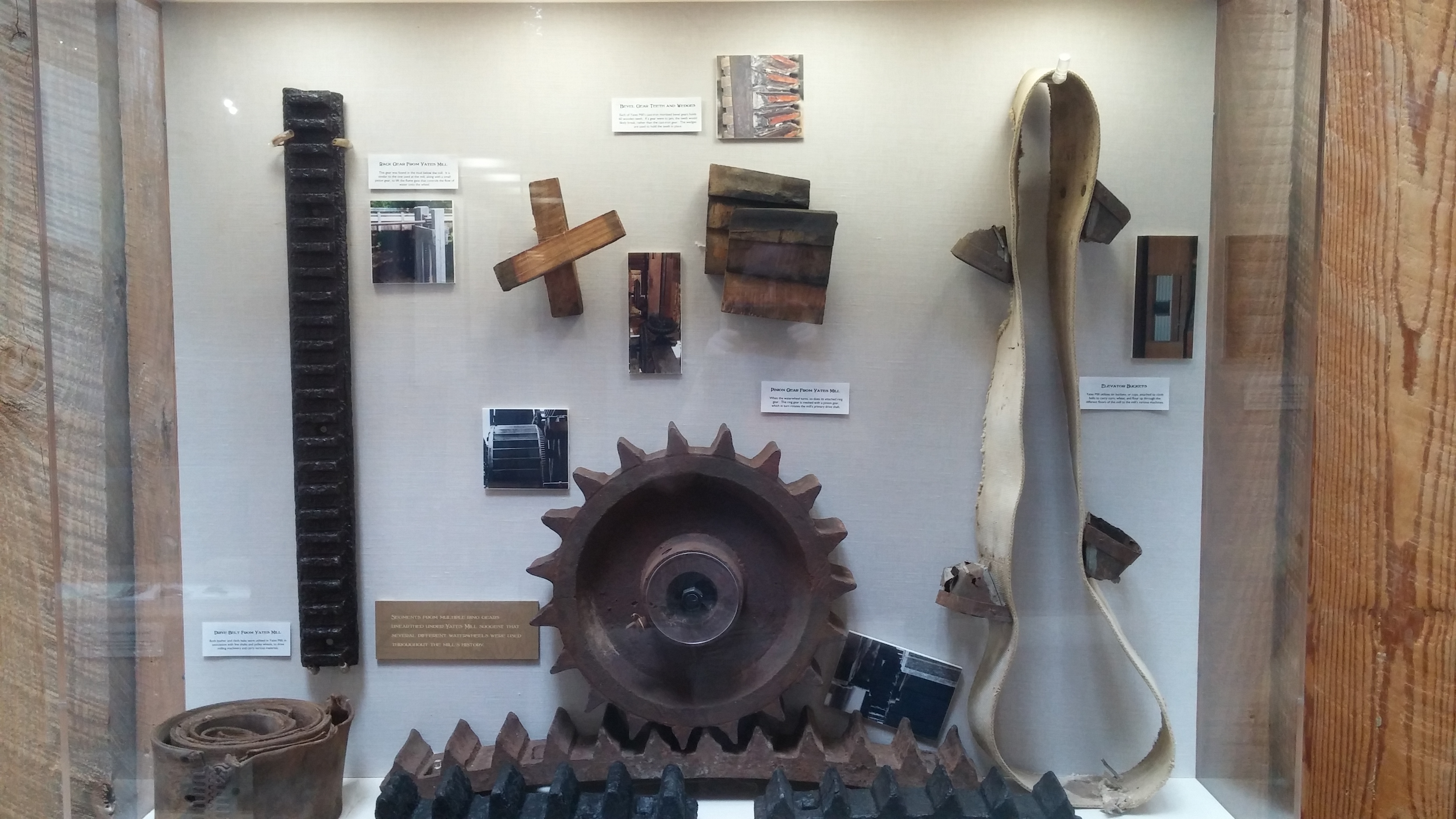 The entrance to the mill's museum, with the mill visible in the background. 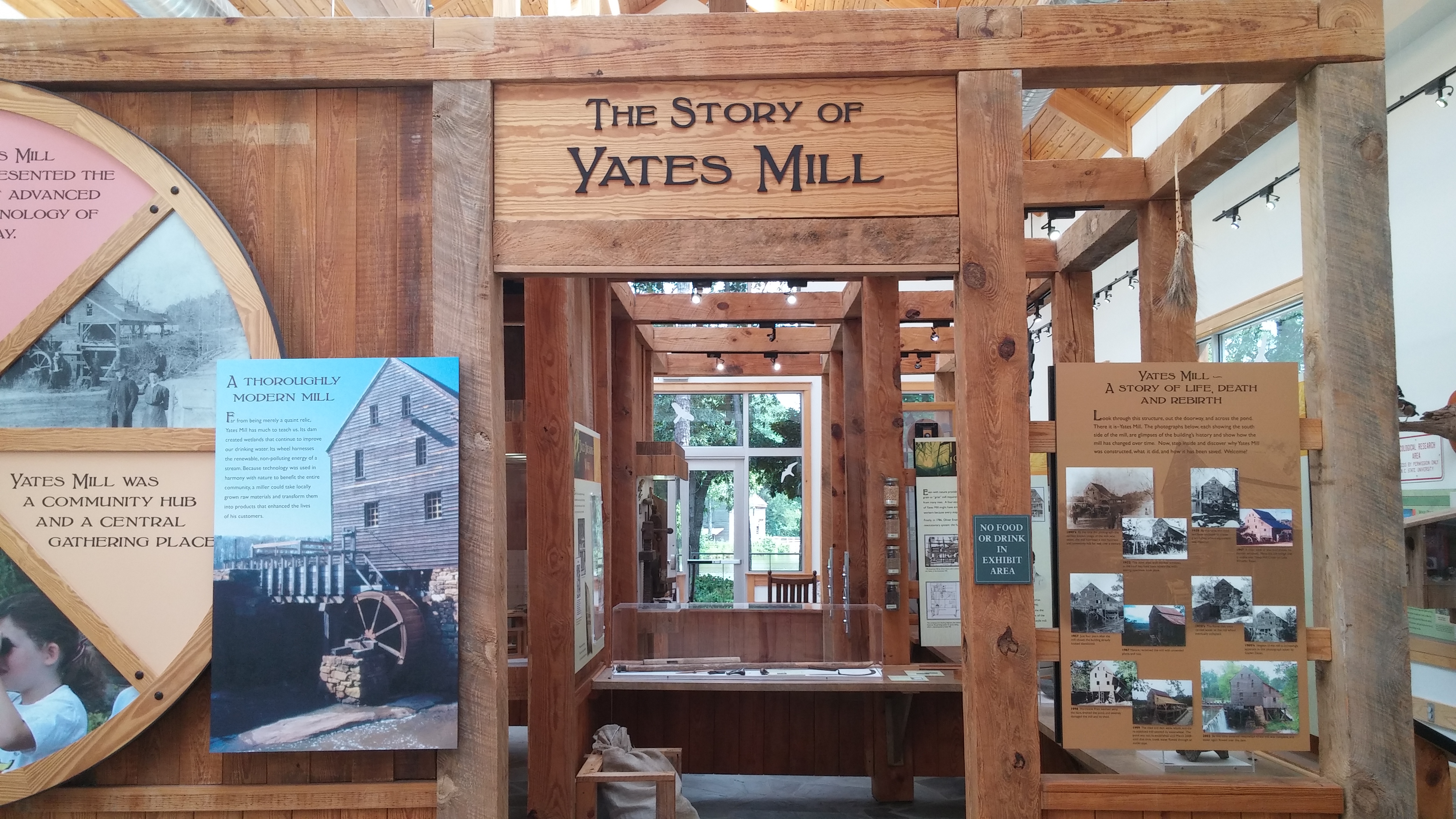 The entrance to the mill and outdoor work area. 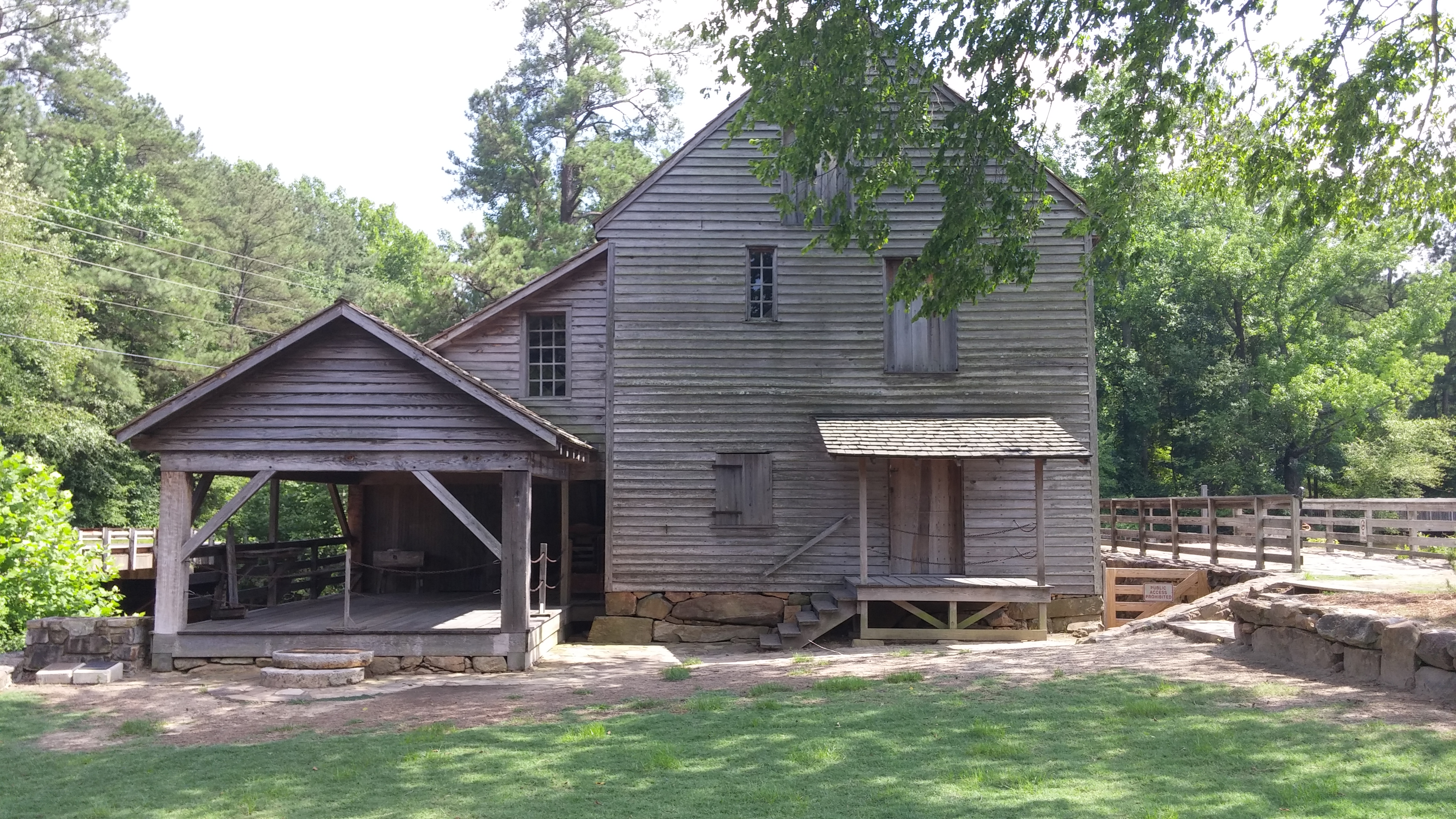 Yates Mill, one of the oldest buildings in Wake County, is the region’s only surviving operable gristmill. For nearly 200 years the water-powered mill produced lumber, milled corn and wheat, and carded wool. The land on which the mill is situated was surveyed for Samuel Pearson in October 1756, and granted to him by the Earl of Granville, one of the North Carolina colony’s Lord Proprietors. The original mill was probably built around that time. Pearson steadily increased his land holdings, and owned more than 600 acres at the time of his death in 1802. In 1819, accumulated debts forced Pearson’s son, Simon, to sell the mill and its surrounding acreage at a sheriff’s auction.2 William Boylan, a prominent Raleigh businessman and director of the state bank, bought the property, and over the next 30 years modernized the mill several times, adding a sawmill in the 1840s.

In 1853 Thomas Briggs, John Primrose and James Penny acquired the mill. A decade later, in the midst of the Civil War, the partners sold the mill and surrounding 94 acres to Phares and Roxanna Yates, James Penny’s son-in-law and daughter. Penny’s involvement in the murder of a Mr. Franklin may have brought on the sale. Although millers were exempt from enlistment, James Penny volunteered to join the Confederate Army. While at war, his wife maintained the mill, and one client, Mr. Franklin, a Union support, developed a $700 debt. When Penny returned and confronted Franklin about the debt, it turned violent and Franklin died.  In 1865, Franklin’s widow supposedly told Federal troops occupying Raleigh that her husband’s death was due to his support for the Union. The soldiers tried to burn the mill by setting fire to the entrance.2 Charred wooden beams today attest to the unsuccessful attempt. In 1866, Penny was acquitted of Franklin’s death.

Yates and his descendants operated the mill until 1948, when businessman A. E. Finley acquired the property. Finley constructed a retreat lodge by the millpond for the use of his family and employees. While some locals continued to use the mill the grind corn, business was scarce. Due to lack of demand, however, the old mill was closed in 1953.2

Ten years later, North Carolina State University acquired the property, consolidating it into a larger tract to be used as an experimental farm. While the students and faculty did repair the mill's roof and other small functions, their primary concern and budget was for education. The mill was mainly used for storage until 1989, when Yates Mill Associates was formed to marshal its restoration. The mill narrowly escaped destruction in 1996, when rains unleashed by Hurricane Fran burst its 250-year-old stone dam. In 1996, Yates Mill Associates and Wake County Parks, Recreation and Open Space unveiled a public-private partnership to rehabilitate the dam and mill as part of a 574-acre historic and environmental park.1 In 2005, restoration of both the millpond and the grinding machinery was completed.2

Today the mill is part of a 174 acre park, and is a popular destination for fishing and has several hiking trails around the pond. It offers tours of the mill throughout the summer season, as well as corn-grinding displays every third weekend. The mill and its park are still associated with North Carolina State University, specifically its College of Agriculture and Life Science.3