Lost River Cave is a seven-mile cave system with a river running through it, with its upper entrance in Bowling Green. Western Kentucky University shares the 68 acres of property with Lost River Cave, through which boat tours are conducted. 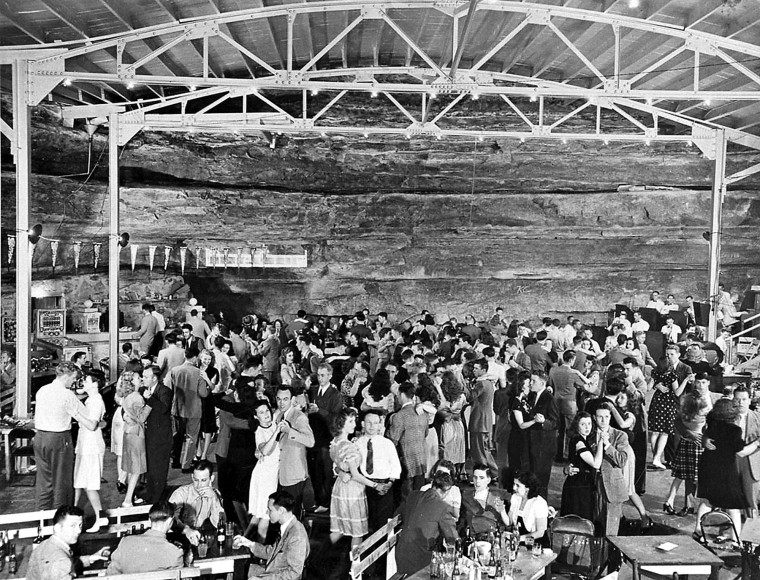 One section of the cave's interior 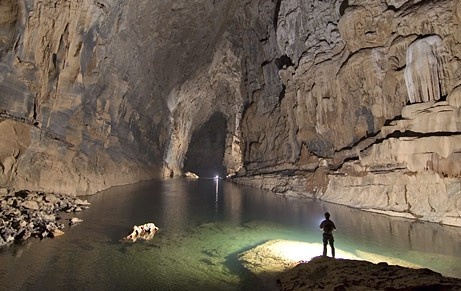 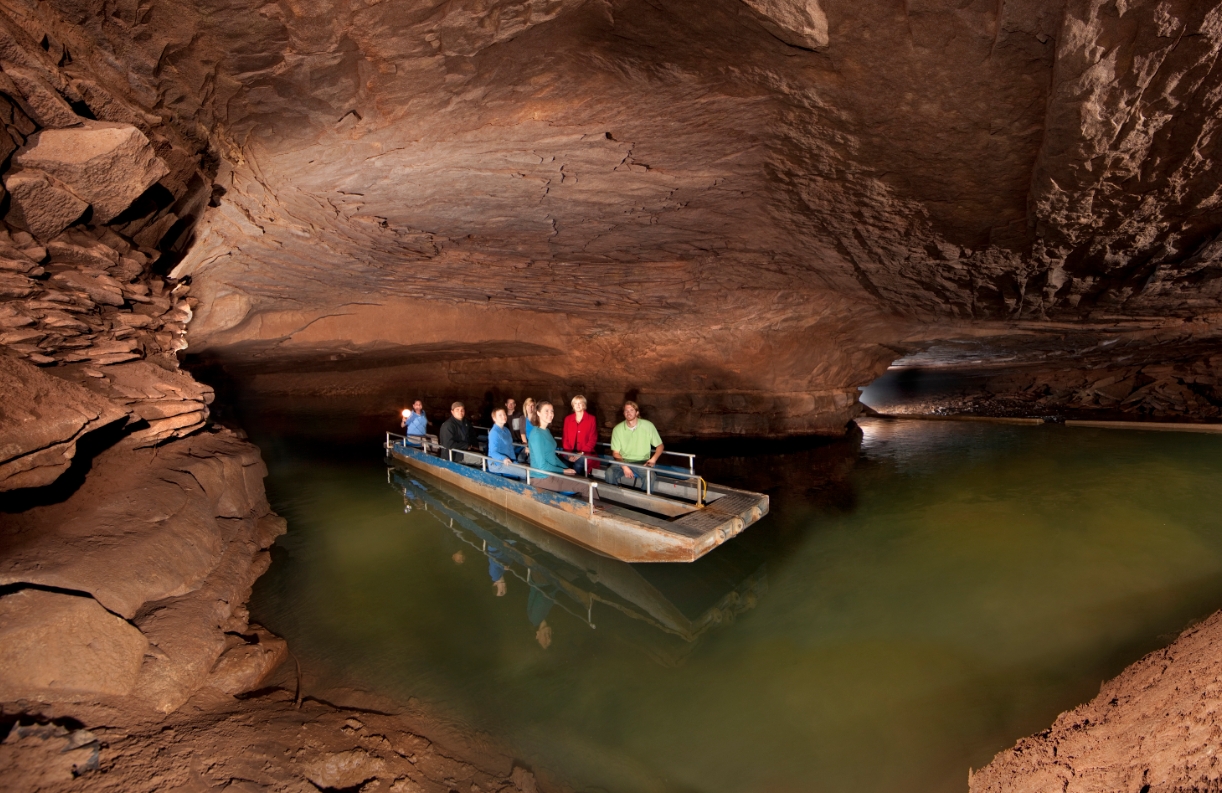 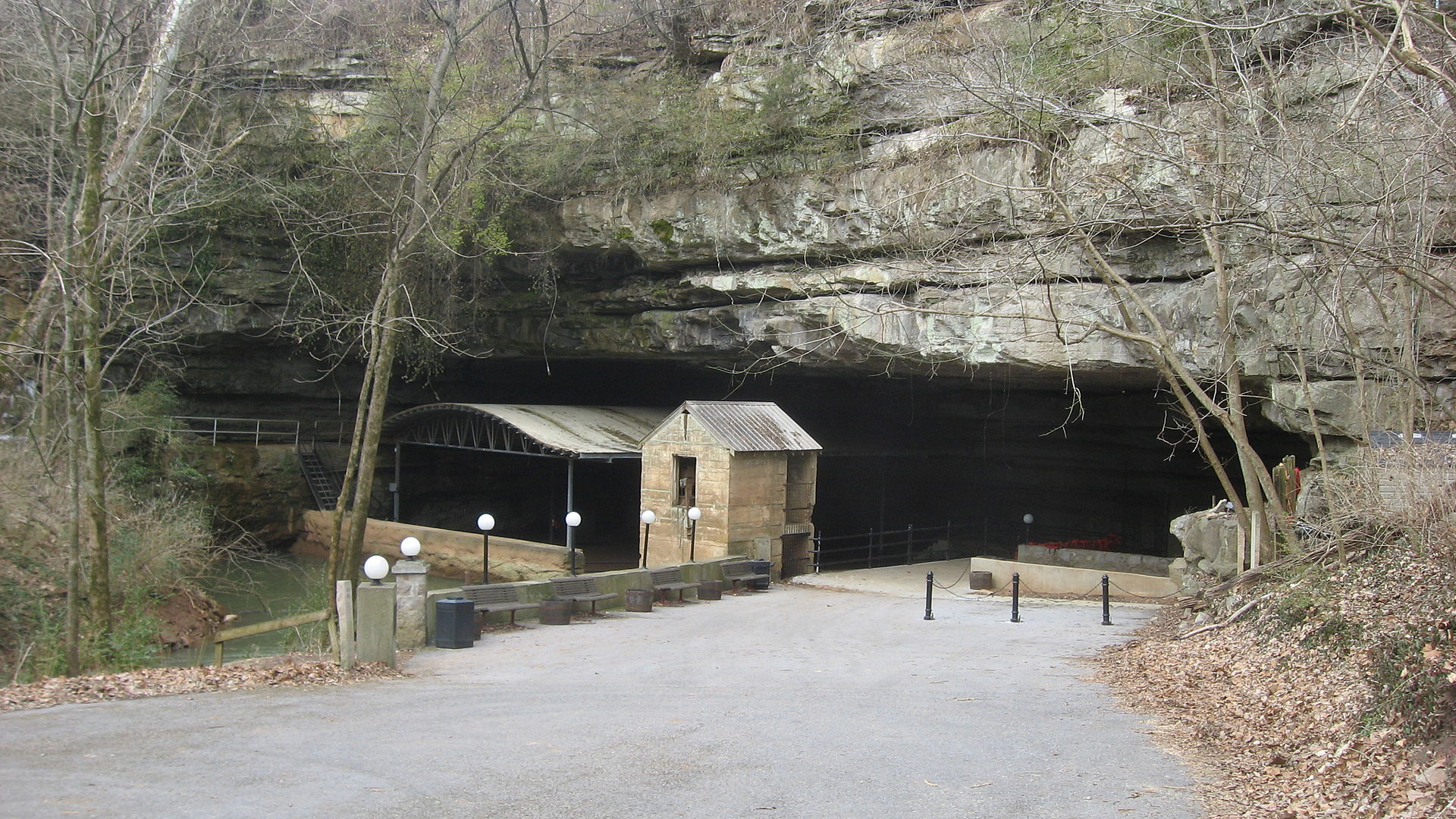 Ever since the first human set foot at Lost River Cave, the cave and valley have been used as a safe and plentiful source of food, water and shelter. Evidence of such use has been uncovered by archaeologists at Western Kentucky University. The cultural artifacts discovered by these experts tell the story of Kentucky's earliest inhabitants and Lost River's place in their lives. Ten thousand years ago, the Kentucky climate was cooler and wetter—supporting a landscape of evergreen forest. The Paleo Indian Cultural Tradition, also known as "big game hunters", roamed the forests in search of food and shelter. These humans utilized Clovis spear points to bring down such animals as the giant ground sloth, the mammoth and the mastodon. They were nomadic groups, moving between different camp sites seasonally. Anthropologist Jack Schock of Western Kentucky University believes that these prehistoric Kentucky tribes camped at Lost River Cave in the winter, enjoying shelter from the cave as well as clean water from the blue hole. One of the only Dalton points found in situ in southeastern Kentucky was discovered at Lost River by Dr. Schock. This spear point, dated at around 8,000 years old, is a rare find, making Lost River stand out as a unique archaeological site for the Archaic Indian Cultural Tradition! These native groups enjoyed a period of occupation from about 8,000 B.C. till around 1,000 B.C. Their culture included more exploitation of the environment than their predecessors.

The cave mills at Lost River Cave and the Louisville-Nashville Turnpike which passed over the cave are connections to the 19th century commercial and agricultural development of Warren County. There are many conflicting reports on the construction of the first mill at Lost River Cave. Some undocumented 20th century reports state that it was built in 1792 as a corn and saw mill. Other accounts place the construction of the "first flour mill in Warren County" much later. There seems to have been several mills with different operators and production goals throughout the 19th century. The first of these structures sat inside the cave while later millers built their operations on top of the arched entrance to the cavern.

The mill was in operation by 1823 and continued until at least 1847 when it was maintained as a grist mill and wool carding machine by a Mr. Shanks. This mill was built directly in the stream under the rock arch of the cave entrance.

Lost River Cave served as a camp for both Union and Confederate troops in this area. Lost River offered a natural water supply and the beauty of the cave provided a diversion from the ugliness of war. On one of his "lightning raids" into Kentucky, John Hunt Morgan allegedly hid in the cave when escaping from pursuing troops.

Nearly 40,000 Union soldiers camped around Lost River Cave & Valley from 1862-1865. An oasis in difficult times, the cave and river provided a cool respite from blistering heat in the summers. The men enjoyed the cave just as the Confederate troops had in their down time. They crawled through the underground network of passages and wrote their names, ranks and companies on the ceilings and walls of the cave. They even fired their guns inside the cave passages to hear the echoes, leaving behind their bullets for historic archaeologists to find more than a century later.

In the mid-1870s, John L. Row built a stone dam in the stream near the cave entrance, drilled through the 42 feet of bedrock in the arched ceiling of the cave entrance and constructed a three-story high mill above the cave. A shaft ran from the mill to an "undershot wheel" in the dam raceway. He operated his mill as a distillery and flour mill until 1889 when it was purchased by James Skaggs.

The last mill at Lost River, owned by Robert Crump, was destroyed by fire in 1915. A history of industry which lasted over a century ended with the burning of the old mill. Today, the hole John Row drilled in the cave ceiling, a reconstructed dam from the night club era and a large waterwheel at the entrance to the park are used by interpreters to explain the importance of economic and industrial development for early owners of the cave and valley.

Though shelter and water have always been high on the list of reasons for living and working around the valley, a very impressive entrepreneur came up with a new and exciting use for the property in the 1930s: A nightclub, complete with stage, bar and dance floor was built inside the mouth of Lost River Cave.

One of the largest cave entrances east of the Mississippi River, Lost River Cave was an ideal spot for the construction of a unique wining, dining and dancing experience. Locals and tourists alike flocked to the "Cavern Nite Club" to enjoy an evening of fun and freedom far beneath the hectic streets of the city. Church picnics, weddings and high school proms were held at the night club from 1934 through the early 1960s and some of the greatest swing band acts of the time belted out tunes from the bandstand.

The Cavern Nite Club served locals as well as the droves of tourists traveling the Dixie Highway from 1933 until the late 1950s. As an added bonus, guests were treated to guided walking tours inside the cave. These tours were especially popular because of a local legend that the famous outlaw Jesse James hid out in the cave depths to escape the law after robbing the Southern Deposit Bank in Russellville, Kentucky.

In the late 1950s, the night club era was at an end. The construction of I-65 re-routed traffic away from the Dixie Highway and from the Lost River Cave. The cool, natural breeze in the cave entrance was less enticing to a generation that had air conditioning in their homes and Elvis Presley's new Rockabilly style was sweeping the United States and replacing swing music.

By the 1980s, Lost River Cave had become a dumping site. In an effort to return the site to its former glory, the Friends of the Lost River formed in 1990.

Lost River Cave is owned jointly by Western Kentucky University and Friends of Lost River, a non-profit organization that works towards preservation of the cave. Friends of the Lost River formed in 1990 in order to clean up and restore the cave and surrounding area, the Friends of the Lost River, Inc. is a 501(c)3 non-profit organization. Through years of effort, the organization has managed to wipe away the traces of the abuse Lost River Cave suffered during its 30 years as a dump site. The underground boat tour, nature trails and gift shop are operated to fund the continuing struggle to preserve and maintain Lost River Cave as a cultural and natural landmark. Local guests of the park may decide to purchase a park membership, make a monetary donation or volunteer service hours to contribute to the Friends' mission.

The two-part tour is 45 minutes. For the first 20 minutes, visitors will walk along the river with their guide, stopping at a blue hole and the cave entrance. Visitors will then board the boat and explore the inside of Lost River Cave for the remainder of the time. Boat tours typically run at the top of each hour.

Other attractions at the park include about two miles of nature trails, a seasonal butterfly habitat, blue holes, and gem mining. There are also other activities to enjoy while on the trails like geocaching, bird watching, bird bingo, and a Young Interpreters program. GPS units and binoculars can be checked out in the visitor's center.

Programs are in the works to remove invasive, pest plants from the valley and upland trails, construct a wetlands area to improve filtration of storm water entering the cave system and design a nature center and exhibit area to better educate and serve visitors to the historic eco-tourism site.