This plant was designed in 1927 to provide heating for the buildings of Western Kentucky University and is still in use today.

The Heating Plant as it looks today 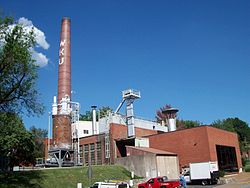 The Heating Plant was constructed in 1927 to provide heat to the growing number of buildings on the campus of Western Kentucky University. It was designed by architect Brinton B. Davis of Louisville, nicknamed the "hill builder" for his hand in designing multiple structures at Western.

The plant provided heat by way of underground pipes encased in concrete masonry. Originally, a spur of the Louisville and Nashville Railroad led to the building, which used coal transported by train for heat production.

In 1963, the original building was expanded. In the 1970s, a new wing was added to the building, bordering College Heights Blvd.

More recent upgrades to the facility have focused on the internal equipment used for steam generation. A project undertaken in 2002 focused on upgrading the boilers in the building, while another undertaken in 2006 focused on ancillirary equipment and emissions control at the plant. While the spur track has been removed, the railroad line still runs near the Heating Plant.

Today, the plant is still in use. It is surrounded by many newer buildings, notably student parking structures and modern residence halls. The Plant is located near the intersection of College Heights Blvd. and University Blvd.