Old Prairie Town is a 6-acre historic park that aims to share the experience and history of early Kansas. Guests can tour a Victorian-era mansion that is listed on the National Register of Historic Places. They can also stroll through a botanical garden that features over 500 species and a large waterfall. There is also a reading garden and a replica of an early log cabin. Old Prairie Town strives to present an authentic prairie "downtown" with a main street filled with historic buildings that were moved to the area. Children can attend a session in a one-room school that was in operation in Rossville, Kansas. Families can tour the historic Everest Church, which was built in 1880 and moved to Old Prairie Town from Everest, Kansas. The Santa Fe Train Depot was also moved from its original location in Pauline. Guests to the Potwin Drug Store sit at the original marble counter and can enjoy old-time treats from the soda fountain. The Mulvane General Store features hand-made candies and gifts that are similar to those that might have been available at the turn-of-the century.

Inside the one room schoolhouse 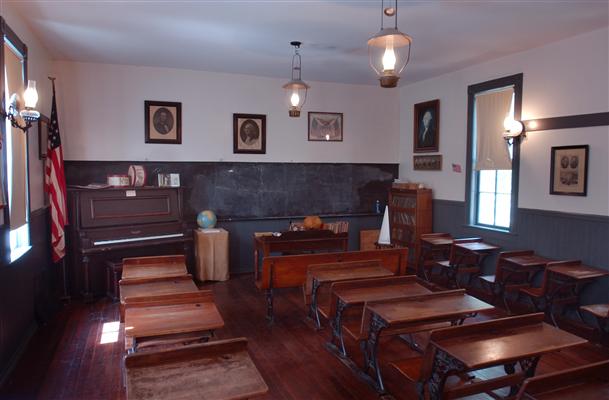 Old Prairie Town includes a variety of historic buildings that were moved to this location to create a historic park. Pictured here is the Ward-Meade House which was built at this location in the 1870s. 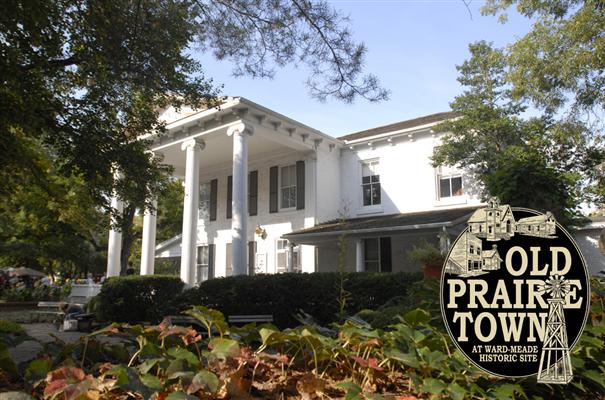 Mulvane General Store-one of several buildings in the town village. 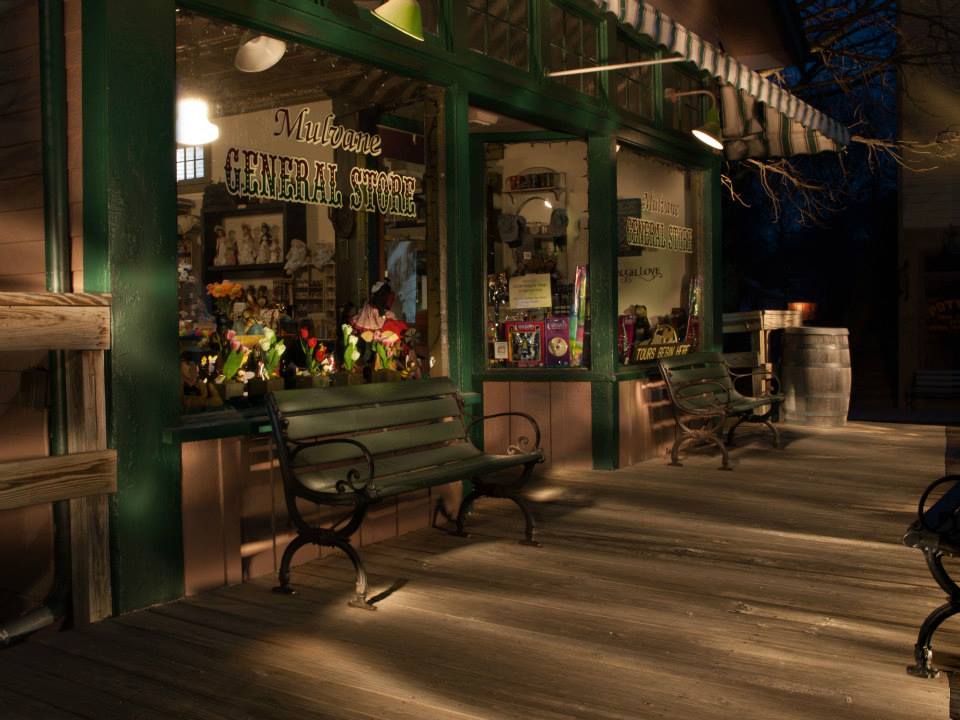 History of Anthony A. Ward and the Old Prairie Town Site

Long before Old Prairie Town held a prominent role as an outdoor museum, the area was originally the homestead of the Anthony A. Ward family.

Anthony A. Ward and his family arrived in the Topeka area of the Kansas Territory in the 1850s. A mission school teacher, Ward was enticed by stories of instant wealth in California, and in 1849, he packed up his belongings and left with his family and his students. Hardship struck the wagon train near Laramie, Wyoming due to sickness and lack of food. The wagon had to return if its occupants wanted to survive.

Unfazed by his previous struggles, Ward happily accepted an offer from the federal government to work as a trading post agent in Uniontown, which was about 12 miles west of present-day Topeka. This gave Ward the adventure he always sought, and so he and his family settled.

Soon after, a cholera epidemic struck the family in 1853, and the Wards moved to present-day Topeka in 1854 after Anthony bought 240 acres for $100, making the family the second white settlers to inhabit the area. Anthony’s wife, Mary Jane Ward, was the first woman white settler in Shawnee County. As westward expansion grew in the late 1800s, Mary Jane Ward garnered the moniker of the “mother of Topeka” because she was known to keep a burning candle in the window aimed at travelers taking the Oregon Trail.

The Wards lived in a small cabin on their land until the 1870s, when they built a two-story, Victorian home. This home would be eventually known as the Ward-Meade home, added to the U.S. National Register of Historic Places in 1975. The area was turned into the Old Prairie Town in 1984. It opened to the public in 1985.1

In addition to the 1870s Victorian Mansion, the first mansion in Kansas, Old Prairie Town is widely recognized as being an authentic historic experience diving into the many nuances that comprised life in 19th century Kansas. Some of the other features of the site include an 1891 Victorian schoolhouse with outhouse, the old-fashioned Mulvane General Store, the Potwin Drug Store, and many other furnishings found in an old prairie town, ranging from a barber shop and ice cream wagon to a livery and the 1880 Everest Church.

After exploring the town, make sure to check out the Botanical Garden at Old Prairie Town, a 2.5-acre garden that features around 500 varieties of trees and shrubs as well as over 5,000 flowers planted annually each year. Near the water gardens in the park, visitors can find Anna’s Place, which features two pools, a gazebo, a bridge, and a waterfall.3