The Hockhocking Adena Bikeway follows the path of the historic Columbus and Hocking Valley rail line which was completed in 1870. The path begins in front of the Athens Community Center on East State Street and passes by the Ohio University campus before proceeding into the wooded area along the Hocking River. The path leads from Athens all the way to Nelsonville. The bikeway offers visitors both nature and history.

The Hockhocking Adena Bikeway begins in front of the Athens Community Center on East State Street. The path leads from Athens all the way to Nelsonville. 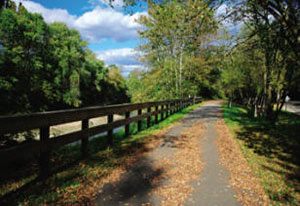 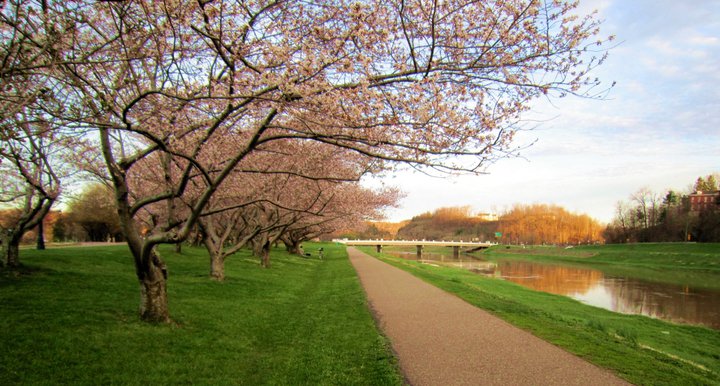 Map of the Hockhocking Adena Bikeway 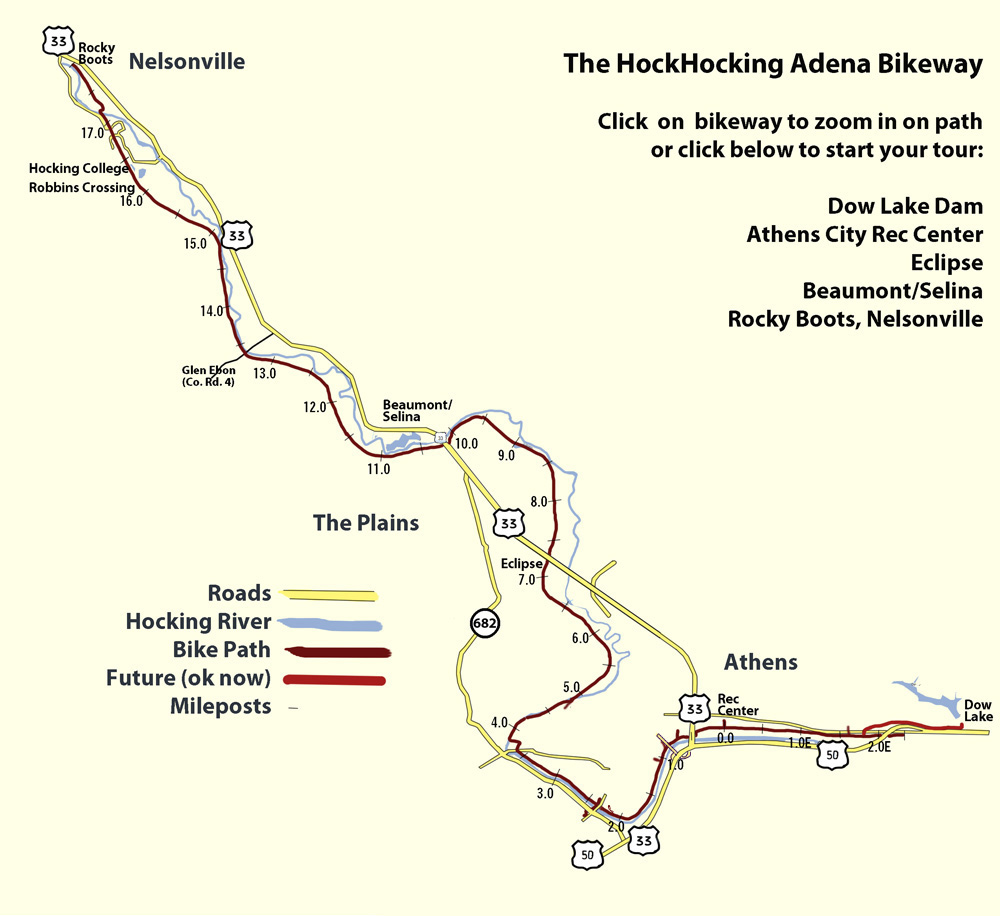 The Hockhocking Adena bikeway is part-owned by the City of Athens, Ohio University, Athens county, the City of Nelsonville, and the Hocking Conservancy. It currently spans about 21 miles, stretching from Nelsonville to South Canaan Road off of US 50. The bikeway was named to honor those who first inhabited this part of southeastern Ohio. “Hockhocking” means “bottleneck” or "twisted." This was the name of the native Shawnee name given to the Hocking River. The name “Adena” came from the Adena Indians who resided in the Hocking Valley over 2,000 years ago. Its strategic location, along the old rail bed of the Hocking Valley Railroad, allows for access to East State Street in Athens (including the community center and the city pool) as well as the Athens Public library, the west side of Athens, The Plains, Hocking College, and the downtown of Nelsonville. In terms of the bikeway itself, the path features lights along the portion next to Ohio University's campus, beautiful tree canopies, and remnants of past mining industry (rail archways at mile 14.5). Within the past decade, there has also been an increase in the number of attractions that are located along the bikeway. In particular, breweries and restaurants located along the bikeway have become popular spots for cyclists to stop, rest, and eat some good food.

As previously mentioned, the Hockhocking Adena Bikeway was built in the same location as the old Hocking Valley railroad bed. The rail line running between Columbus and Athens was completed in July 1870. Prior to the construction of the railroad, the location served as a towpath along the Hocking Canal, which was constructed between 1829 and 1842. This canal was used to transport products and raw materials such as salt, wool, bricks, and coal to Carroll, Ohio where the canal met the Ohio-Erie Canal. The canal included 7 culverts, 26 locks, and one aqueduct which crossed Monday Creek south of Nelsonville. Over the course of its lifespan, the canal experienced repeated flooding, causing severe damage which was costly to repeatedly repair. Due to this damage, and the fact that by the 1860s the railroad was a far more efficient and faster means of transportation, rail became the more favorable method of transportation. While traveling down the bikeway through Armitage north to Chauncey, remnants of the canal basin can still be seen.

Most of the bikepath, the 21 miles of pathway along with the access spurs, has primarily been constructed over the past fifty years. In fact, the original portion spanned along the Hocking river on land owned by Ohio University. It wasn't until the Hocking River was moved, and the flood levee was built, did the constructions of the bikeway begin. As described by a city planning document from 1991, moving the river is really what spurred development in the area still categorized as the flood plain along the southern reaches part of the City of Athens.

The Hocking River has historically shaped the way that Athens has developed. The original riverbed approached from the west side, and left on the east side, much the same way it does today. However, the river originally curved in towards the downtown of what would become Athens and flowed under the Richland Ave bridge. Due to the position of the river, and the relatively narrow channel it occupied, in connection with town development, the river would frequently flood, causing damage to homes and businesses for decades. Massive floods occurred in the early 1900s and well into the middle portion of the century. Finally by the 1960s, concrete plans to move the river began to take form and by 1971 the Army Corps of Engineers had successfully channeled the Hocking into its new river bed.

The University as well as the City of Athens certainly had big plan when it came to developing the newly available land. According to a collection of city planning documents from 1968 titled, “Comprehensive Community Plan and Implementation: Athens, Ohio,” there are a couple different categories where plans for the new space (future location of the bike path) seem to stem from. These included an interest in urban beatification, accessible transportation, an increase in green spaces generally, and use for the flood plain.

One of the long-term goals described in the 1968 document was to “Develop an urban beautification and open space development program for the entire city. This [would] further enhance the various neighborhood environments, recreation facilities, and other public facilities.” In terms of planning for the future of public and semipublic spaces, the recommendations were as followed: “Develop additional community parks, two possible locations are at the end of W. State Street and off E. State Street adjacent to the Route 33 bypass. Undertake Hocking River relocation and flood control programs and acquire portions of the flood plain for open-space and recreational use. Supplement the river recreation corridor by acquiring land for playgrounds in built-up areas.” Scheduling priorities to follow up the recommendations included “Relocation of the Hocking River. Begin to acquire sections of the open space corridor along the Hocking River. Also acquire land for neighborhood playgrounds.” Hence there was a real interest in developing the space as a conservation and recreation area.

Speed ahead twenty some years, and a city planning document from 1991 discusses may of the same topics as the previous one from 1968, but with a more specific view. For instance, a section of the report that covers transportation in the city actually mentions bikes! Along with recognizing the need for road improvements and parking availability, it says that “Bicycle use [is] still largely recreational for the general public, not widely accepted as transportation.” This is interesting, as it acknowledges the trend towards bicycles for adults as potentially being a mode of transportation, not just a child’s plaything, but once again states that there is not widespread interest in creating the infrastructure to support the mode.

Additionally, in this 1991 text, there is mention of goals to enhance public services within the city, listing two tangentially related concepts that we may now come to see as catalysts for the creation of the bikeway just a couple years later. First is the interest of supporting the continuation of public transportation, and the second is that of expanding public spaces and park areas. The report says “Retain the current recreational facilities and link them by pedestrian access to adjacent neighborhoods. Add small “pocket parks” strategically located to accommodate playgrounds and passive recreation in neighborhoods.”

Additions and spurs have predominately been added in the past five years, including a connector trail from West State Street Park (by mile 4) across the Hocking over an old rail bridge, connecting the bike path to the start of Armitage road and University Estates. There is one that connects the bike path to the portion of Johnson Road near the entrance of Athens High School in The Plains. Another spur was added by mile 5 which connects the path to Columbus Road. This also features a river crossing with a beautiful bridge. In short, these recent efforts of expansion have allowed for increased access to the bikeway.