After 1833, the sale of slaves was not allowed within Natchez city limits. In response, slave traders established a market for the sale of human beings at this site, known at the time as "The Forks in the Roads. Operating more like a store than an auction house, the market was shut down by Union troops during the Civil War. The site became a "contraband camp" in the final years of the war, the name given to former slaves by the Union Army who utilized these individuals for their labor. In exchange for that labor, the Union provided modest wages and protections from re-enslavement. 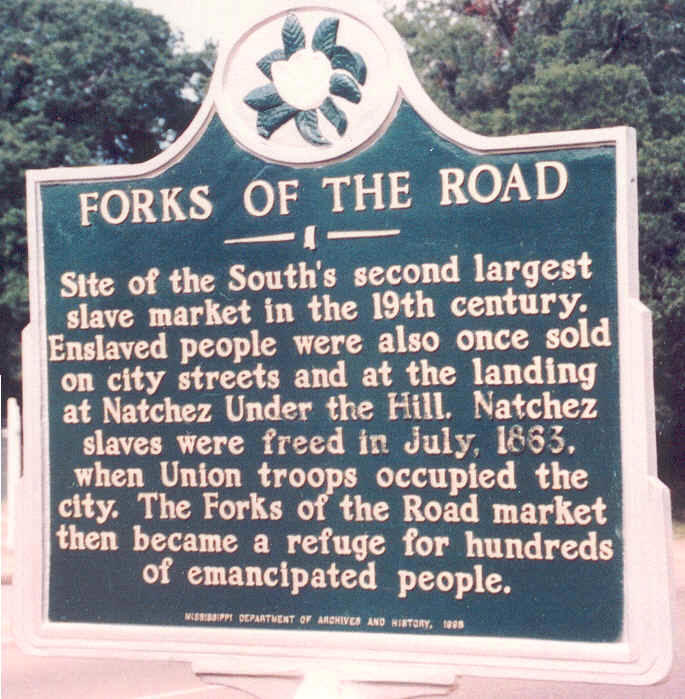 According to an 1834 description of the building, the slave market was “a cluster of rough wooden buildings, in the angle of two roads,” with “a wide gate” leading into a narrow courtyard, “partially enclosed by low buildings.” The slave market operated more as a store than an auction as planters and their representatives usually made single purchases rather than attending large auctions as was common in larger cities like New Orleans.

The auction was demolished in 1863 and later became the site of a labor camp for former slaves. An African American Union regiment was also formed at this location, demonstrating the rapid shift from slavery to freedom through military service that would inspire the 14th and 15th Amendments which extended citizenship to all native-born Americans and voting rights for all men regardless of race.