In December of 1846, 11 lancers belonging to local loyalist (pro-Mexican government) Californios hid at this location where an adobe belonging to Don Jose Serrano once stood, only to be tricked and kidnapped by local Luiseno Indians. Forced to march east of this location to present-day Warner Springs, the Luiseno tortured than killed all the lancers. This event took place just after the costly American victory in the nearby Battle of San Pascual. The Luiseno were allies with the American and rebel Californios forces. This massacre has recently been considered a part of the broader campaign to capture Southern California during the Mexican War.

1830s sketch of Luiseno Indians by Pablo Tac. Possibly a resident of the Mission San Luis Ray de Francia area, where the Luiseno went during Spanish and Mexican rule of California. 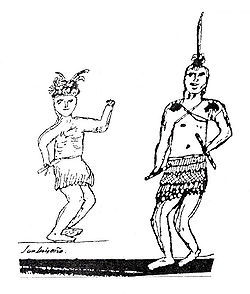 1851 map showing Warner's Ranch, modern-day Warner Springs. This was the general area where the 11 lancers were taken to be killed by the Luiseno Indians. 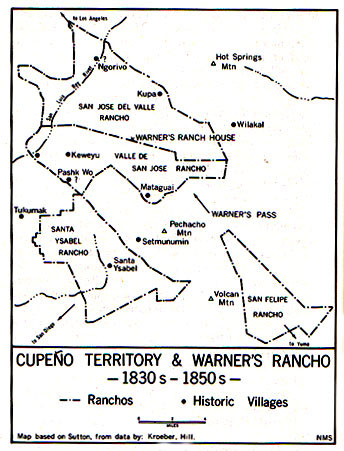 *The location of the former Serrano Adobe is now private property

After the Battle of San Pascual, the loyalist Californio lancers whom belonged to the Mexican military force that took part in the battle, broke up into different groups. A group of eleven men traveled to Rancho Pauma, owned by Jose Antonio Serrano. Along the way, the men stole a herd of fine horses belonging to the Pauma band of the Luiseno Indians and retreated to the rancho.

Serrano, his fourteen-year-old son Jesus, and his brother-in-law Jose Aguilar had gone to a nearby settlement called Pala, where Serrano's wife and other children were staying. Before leaving, Serrano was said to overhear two Luiseno women discussing a plot to capture the Californios.

They took eleven prisoners to El Potrero, an Indian rancheria, for the night. The next day the party traveled to Aqua Caliente (Warm Springs, now known as Warner Springs). Chief Manuel called the area bands together for a tribal council to decide the fate of the horse thieves. Most tribal chiefs believed the prisoners should be scarred and then released. William Marshall, a local American, entered the debate. He swayed the vote in favor of executing the prisoners.(See Notes below.)

The tribal leaders decided the Californios should undergo ritual torture and execution for their crimes against the Pauma band. After the Californios witnessed the first execution, the men wept and begged for their lives. Santos Alipas, thirteen years old, stood up and reportedly said, "What's the use of crying? We can only die once; let us die like brave men." Impressed with Alipas' bravery, the Luisenos gave him a choice on how he wanted to die. The boy asked to be shot. He was immediately shot through the forehead.

When word of the massacre reached Mexican forces in Los Angeles, General Jose Maria Flores designated Jose del Carmen Lugo of San Bernardino to lead a group of soldiers to avenge the lancers' deaths. The soldiers carried out their mission with the aid of allied Cahuilla Indians. They killed an estimated 33-125 Luiseno warriors, including the leaders who had authorized the earlier attack on the Californios. The action was called the Temecula Massacre.

*Notes: According to Herbert Lockwood, William Marshall at one time was in love with Senorita Osuna. She told Marshall to leave her alone, as she planned to marry José María Alvarado. Marshall was heartbroken and angry. He moved to Warner's ranch where he was hired as a foreman. He married a Cupeno woman and was accepted as an unofficial member of her tribe. When he saw Alvarado among the Californio prisoners, he saw an opportunity to take his revenge. Some historians believe that Marshall had no part in the Pauma Massacre.

**No known marker or plaque seems to exist to commemorate the massacre at this time. If one exists, it should be added to this entry. If there is more information out there or known sketches portraying the massacre, or even photos of William Marshall, please add to this entry.