This grand stone courthouse was built in 1916 and in 1929 the jail was added to the northeast corner of the square. The decision to build such a stately building might have been partially inspired by many years of conflict over the location of the county seat, In 1911, Pineville was selected and this Classic Revival structure was built to house the courthouse using stone from a local quarry. A.F. Wysong, an architect from West Virginia, designed the building while D.J. Phipps of Roanoke was contracted to build the structure. The total cost of the building was $79,000. The county was created by the General Assembly of Virginia in 1850 when they decided to create Wyoming County using land from Logan County. 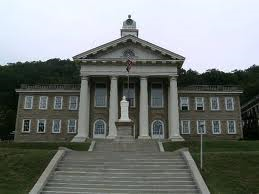 The current jail was built near the courthouse in 1929. The contract to build the jail was given to the Early Brothers. The jail shares many similarities to the courthouse having been built of the same native sandstone and as well as displaying many of the same architectural features.

During 1930, the WPA provided aid and a Courthouse Square was landscaped and a stone wall built. The stone used for the wall also came from a nearby quarry just west of Pineville. Across the street, a three-story building was built behind the Square as a fireproof annex.