Spanning nearly 30 acres, deCordova Sculpture Park and Museum features contemporary art and sculptures in a beautiful, scenic park setting. The largest park of its kind in New England, the sculpture park and museum provides “a constantly changing landscape of large-scale, outdoor, modern and contemporary sculpture and site-specific installations.” At any time, guests are treated to more than 60 works hosted by the Park. Most of the works are on loan to the Museum. In addition, the sculpture park and museum hosts lectures, discussions, readings, book and film series, art tastings, performances, studio workshops, family programs, summer camps, and school/group visits. 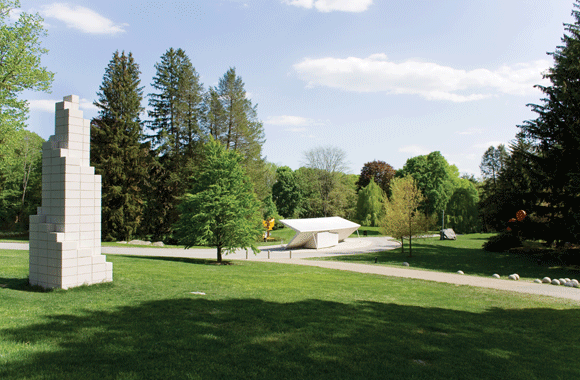 The deCordova Sculpture Park and Museum sits on the former estate of Julian de Cordova, a Jamaican immigrant who worked his way up to successful businessman.  His passion for travel and art led to a massive collection of art and artifacts. De Cordova opened his estate to the public to share his assortment of paintings, sculptures, and other exquisite items.  He gave his property to the Town of Lincoln upon his death with the request that the town turn his estate into a public art museum.  The museum officially opened in 1950 and was the only art museum at the time that focused on living New England artists.

By the 1980s, more museums and small galleries that focused on modern regional art were being established.  A new director named Paul Master-Karnick arrived in 1982 and used his skills to strengthen the curatorial programs and the deCordova museum.  He introduced the deCordova Annual Exhibition with features the works of emerging artists in the New England region.

In 2008, Dennis Kois became the museum’s new director. He perceived that the museum had changed its focus from all art to a primary interest in sculpture. Therefore, he convinced the Museum’s leadership to change the name of the establishment from the deCordova Museum and Sculpture Park, to the deCordova Sculpture Park and Museum, placing more emphasis on the statuesque art that adorns the property.

In addition to providing an indoor-outdoor venue to the enjoy various types of artwork, deCordova instructs artists through classes for various skill levels.  There is even a $25,000 annual prize awarded to an established regional sculpture artist.  The artist’s work is prominently displayed in the gallery.

The museum is open year-round and features rotating exhibits and programs. The sculpture park displays works by nationally and internationally recognized 20th and 21st century artists. There are at least 60 pieces on display at any given time, which are a part of collection works, loans, or site-specific projects. In addition, the sculpture park and museum hosts lectures, discussions, readings, book and film series, art tastings, performances, studio workshops, family programs, summer camps, and school/group visits.

About. deCordova Sculpture Park and Museum. Accessed May 11, 2017. https://decordova.org/about.