Known as "The Queen of the Missions," Santa Barbara is the only California mission to remain continuously under the operation of the Catholic church since its founding. It is the tenth of the state's twenty-one Franciscan missions established during the Spanish colonization of Alta California, an extension of Spain's territorial conquests in Mexico. Many of the infrastructural projects that supported the mission since the 1800s have paved the way for the modern city of Santa Barbara, which takes its name from the mission. Through its eventful history, the tenacious establishment has weathered multiple earthquakes, drought, corrupt governors, and even a pirate raid. Today the mission, museum, and grounds remain open to the public year-round for a small admission fee, and several types of guided tours are available.

Mission Santa Barbara church as it stands today. The mission is the only one possessing two belltowers, though original plans called for only one. 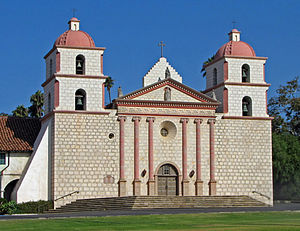 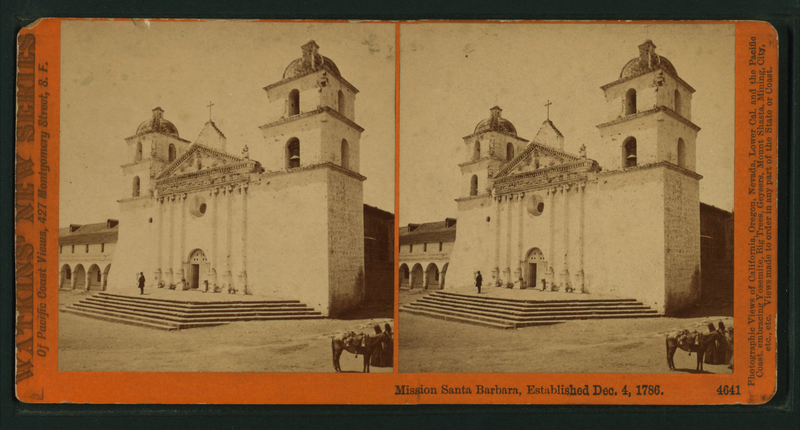 Fountain and lavadero built by Chumash Indians in 1806. 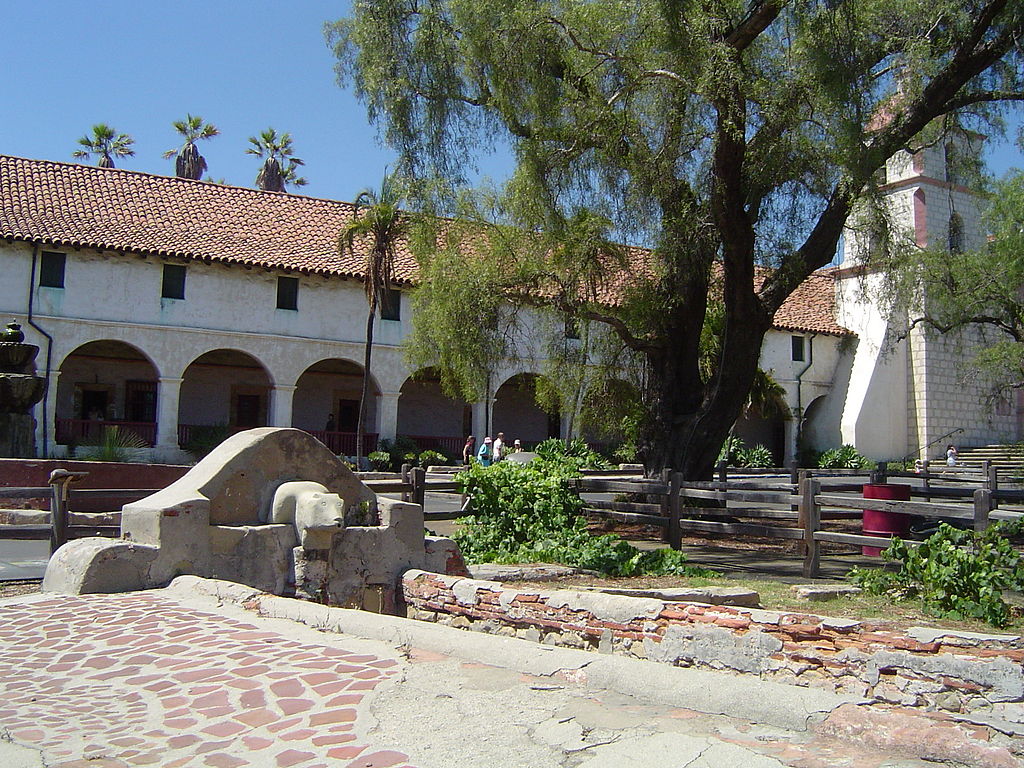 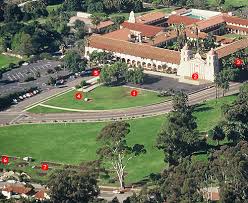 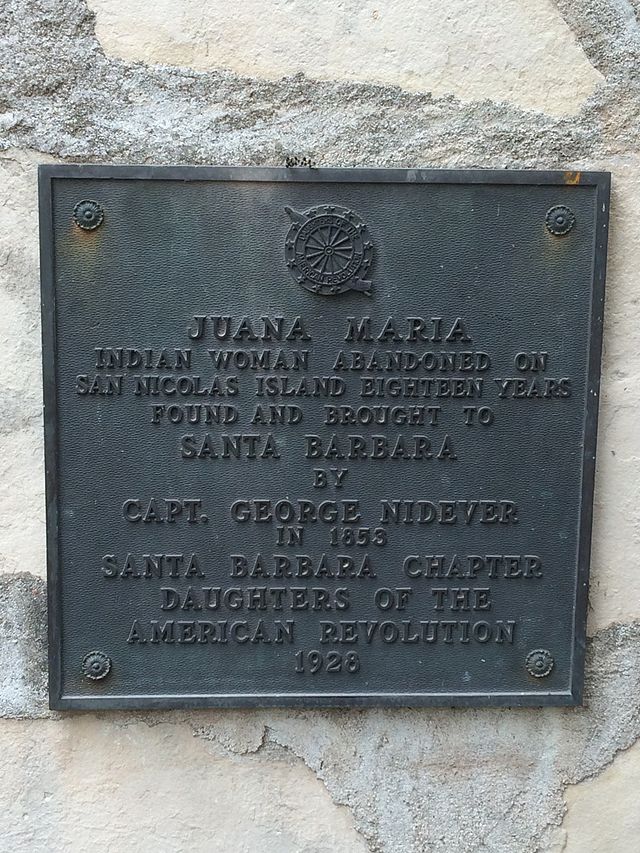 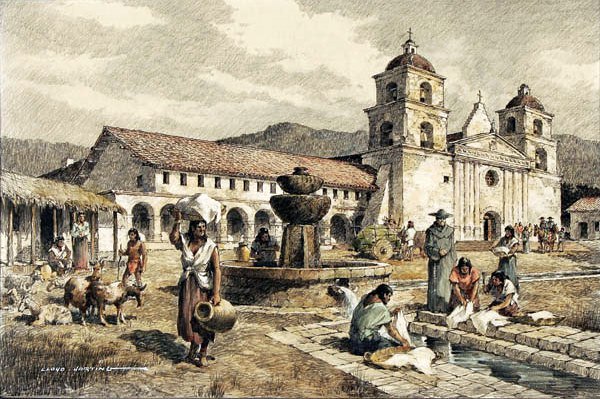 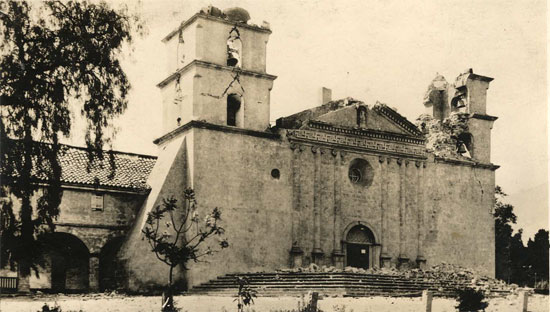 Reconstruction of mission following the 1925 quake 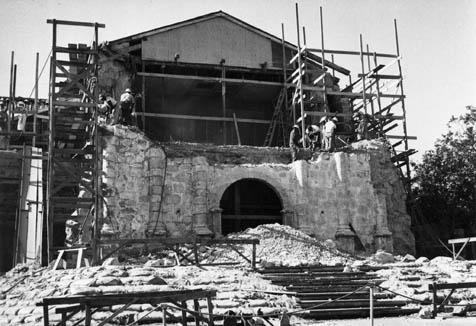 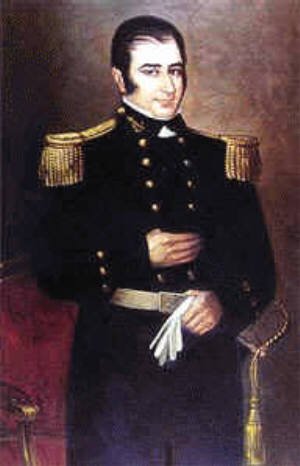 In 1782, while attending the dedication of the Spanish presidio (fort) of Santa Barbara, Father Junipero Serra envisioned a mission to be established nearby, under the new presidio’s protection. For four years he tried to gain approval for the endeavor, but the Spanish Governor of Alta California (Upper California) distrusted the Franciscan’s motives, fearing that with each new mission, the friars gained more power, more land, and more Indian converts. Finally, shortly before the Serra’s death, a new Governor granted his request. Serra would not live to see the mission he envisioned, however, and it would fall to his successor to accomplish the task.

On December 4, 1786 the new President of California’s Franciscans, Father Fermin Francsico de Lausen, dedicated the new addition. California’s tenth mission was named after the Catholic Saint Barbara, whom was believed to have been beheaded by her father for devotion to her Christian faith, and the dedication took place on the Feast of Saint Barbara. Mission Santa Barbara would serve the Chumash and Barbareno Indians who lived in the coastal region surrounding the presidio. A few baptisms quickly followed while log and adobe buildings were constructed (the quadrangle, kitchen, store room and dormitory). A number of houses for Indian neophytes (converts) were located on the modern-day parking lot. In 1794, the largest of three churches was built on the site and held six chapels within.

That same year, however, the mission was hit with a severe drought, necessitating plans for an aqueduct. Though this improvement would take years to build, the mission recovered quickly, and soon could boast over 11,121 head of sheep in 1803. Completion of the dam and aqueduct in 1806 would expand the agricultural capacity of Santa Barbara still further, and by 1809 the mission could support 5,200 cattle alongside the mutton. Indeed, the irrigation made possible by the dam was so effective that parts of that system remain today; the reservoir that was created, the largest in the area, still serves Santa Barbara today. In nearby Pedragoso Creek still another dam was constructed of stone, shell, lime mortar and cobblestones, and remains today as part of the city’s Botanical Gardens. The water provided more than just an agricultural boost: within the mission a fountain made by Chumash Indians ingeniously overflowed to feed the lavadero, where the clothes of the mission population were washed.

An earthquake struck the area in 1812, devastating many of the Southern California missions. Santa Barbara’s church was largely destroyed along with portions of other mission structures. The earthquake was so severe that reports exist of waters receding by several hundred yards from the shores of nearby inhabited Santa Rosa Island. As a result, many of the Indians living on the island resettled at various missions. Santa Barbara’s church was patched up and used until construction on a new church could begin.

The church in its present form was reconstructed from 1815 to 1820 using local sandstone. Its façade was modeled after one found in the 1787 Spanish edition of Vitruvius’s famed ancient Roman book on architecture. This church design called for a building 161 feet long, 42 feet high, and 27 feet wide, and though original plans only called for one tower, a second was added in 1833. Santa Barbara thus became the only mission with two towers. The attached monastery wing has been altered significantly over time. It started in 1809 as a balustraded, one-story building. A sloped tile roof was added around 1812. A second story was added around 1856, but the tile was later removed. Around 1888 the tile was added back to the roof and the structure looked then as it appears today.

During 1818, some 150 Indian neophytes were armed and trained to be part of the Presidio guard. This was in response to the threat of attack by a Argentine corsair (pirate) of French origins, Hippolyte de Bouchard. Bouchard had already attacked Monterey, captured the presidio, and set fire to the buildings. To the relief of the mission’s inhabitants he bypassed Santa Barbara, finding the deserted Ortega Ranch in Refugio Canyon. His men plundered the ranch, but guards from the mission led by Sergeant Carlos Antonio Carrillo surprised the pirates, cut off their escape from the canyon, and captured a number of them. Bouchard, however, had captured some of Carrillo’s men and was able to arrange a prisoner exchange before departing in search of easier prey.

In 1833, President-General of all California missions, Father Narciso Duran, moved his headquarters to the mission from the traditional President’s offices in Monterey. Soon thereafter, Mexico passed its Secularization Laws of 1834, divesting the missions of their property. Duran’s fortuitous move, however, ensured that even after being secularized the mission never left the Franciscan Friars' hands. From 1839-43, Duran was appointed by the first Mexican Bishop of California, Francisco Garcia Diego y Moreno, to run the mission and in 1843 it was returned to the Franciscan order, making it one of the first and few missions to be restored directly to the Franciscans. Another threat materialized, however, when just prior to the Mexican War, California Governor Pio Pico attempted to obtain and sell all lands and buildings belonging to the California missions. Luck was with Santa Barbara again--Pico was unable to sell its lands before the American flag flew over Monterey and Pico was ousted from power. Although Franciscan priests still ran the mission, the mission was returned to the Catholic Church in 1865 by President Lincoln.

In 1853, a somber event took place. The body of an Indian woman of the Chumash, was discovered on Saint Nicholas Island after apparently being abandoned there for 18 years. Not much was known of the woman beyond a name, Juana Maria, or how her life came to such an end. Discovered by Captain George Nidever, her body was placed in the cemetery on mission grounds. A memorial plaque remains today, marking her burial site.

Though the Franciscans continued on as the mission’s caretakers, the late 1800s brought on a variety of uses and events.From 1868 to 1877, the mission grounds were used as a boys’ high school and junior college. During the Christmas of 1882, Princess Louise, daughter of England's Queen Victoria, visited the mission. She became the first woman to be allowed in the cloistered gardens. In 1892, President Benjamin Harrison visited the mission with a surprising lack of fanfare, whereas President William McKinley’s visit in 1901 brought on a large parade to commemorate the event. Two years later, Pres. Teddy Roosevelt visited and praised the church leaders for their efforts to preserve the mission.

In 1925, yet another earthquake struck the area and damaged both the church and monastery wing. The three stone figures of Faith, Hope and Charity were damaged. Rebuilding started immediately under the direction of Ross Montgomery, an architect from Los Angeles. Many of the walls and roofs were replaced with reinforced concrete; keeping the sandstone and adobe exteriors. By 1927, restoration was complete at a cost of $400,000 donated from throughout the state. However, by 1950, cracks appeared in the façade; this time from a chemical reaction within the 1925 restoration materials. The entire façade had to be torn down and replaced, this time with steel-reinforced concrete. The builders were careful to keep the original design of the stone facing. In 1956, a major building program added two large quadrangles and the West wing changed. The second quadrangle, started in 1796, was restored to two stories. Other additions were made to serve as a chapel, auditorium, and lounge.

Nearly a hundred years since the last royal visit, Queen Elizabeth II toured the mission in 1983.