The 16th mission established in California, San Miguel Arcangel was set in a critical location bridging the gap between missions San Antonio de Padua to the north and San Luis Obispo de Tolosa in the south. With these two missions separated by 77 miles, San Miguel made it possible to find shelter halfway between, allowing for travelers on horseback to easily spend each consecutive night at a mission in the area. Named after the Archangel Michael, the mission’s primary goal to was to Christianize the Native Americans of the Salinas Valley.

Mission San Miguel Arcangel fountain in mission garden. While not orginally part of the mission complex, it is considered to be well-matched to its architectural style, and is patterned on the fountain at Mission Santa Barbara. 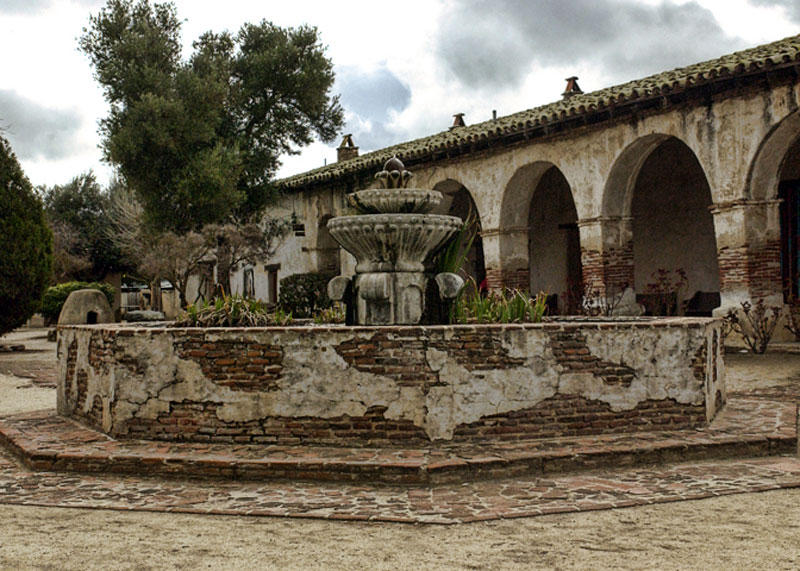 The reconstructed archway/bell tower of San Miguel Arcangel. The statue in the background is of Father Junipero Serra, original founder of the California missions, but who had died several years before San Miguel's establishment. 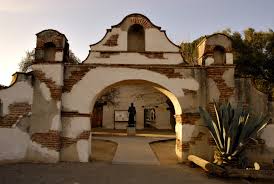 The original bell tower, on the road just outside of the mission. Called a "campanario," the bell tower was an essential part of mission achitecture. 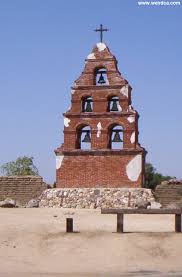 Mission ruins in 1923 before restoration began in earnest. Though a Catholic priest had returned to the parish decades before, the need to preserve and restore the missions was not recognized until the 20th century. 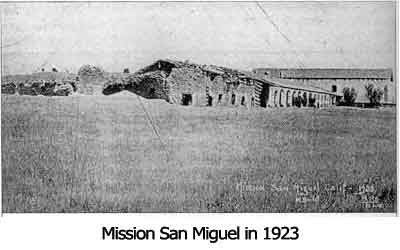 The mission as it appeared in 1898, the year the Spanish-American War began. 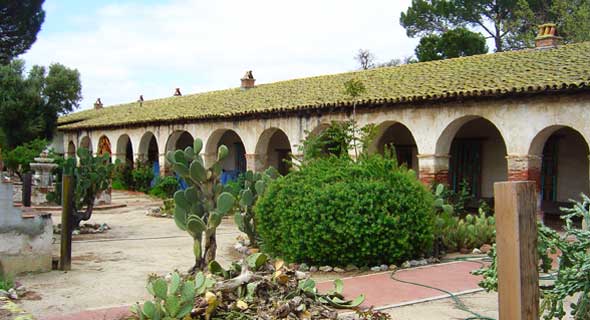 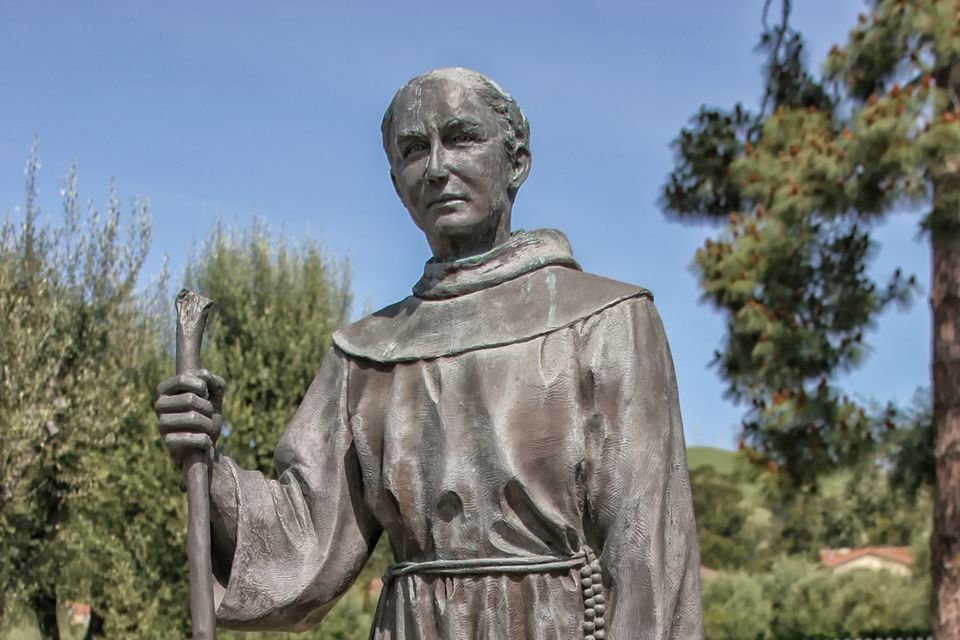 A depiction of Salinan and Ohlone dancers, in a contemporary painting by William Hatcher (source below). Hatcher has finished a number of paintings of San Miguel Arcangel and related subjects. 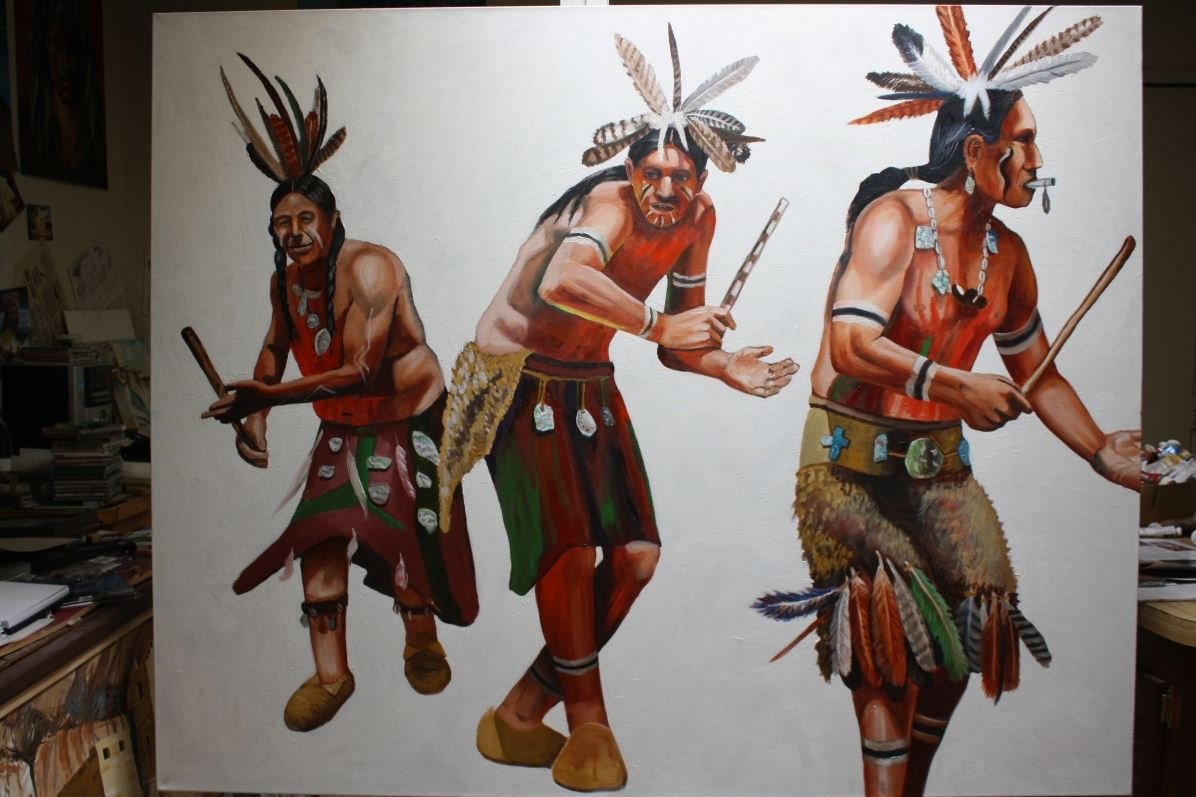 Although the site for Mission San Miguel Arcangel was chosen in 1795, it would not be until 1797 the mission was established and construction to begin under the guidance of Father Fermin Francisco de Lasuen. The same day Fermin established the mission, up to 25 Indians were baptized. A small mud-roofed church was the first mission building constructed and by 1800, the tradtional mission quadrangle was finished along with irrigation for crops, orchards and a vineyard.

Although originally designed to focus on the native Salinan tribes in the surrounding area, ventures were made west to a rancho Bubala in the Tulare Valley, named for the Bubal Indians. While baptizing 24 Bubal Indians, the Spanish padre and two soldiers, also tried to intervene in a conflict between the Bubal and a nearby hostile tribe. The Spanish efforts were unsuccessful and they came under attack themselves, returning to the safety of San Miguel Arcangel. Further efforts to other tribes were abandoned for a time.

By 1810, the mission was growing larger and industrial buildings, including a granary, were built. A new brick kiln churned out thousands of bricks and tiles were made for the construction of a larger and more permanent church. From 1814 to 1818, this new church was constructed entirely with bricks made locally within the burgeoning mission community. These industrial efforts allowed more houses to be built near the mission and along El Camino Real--the “King’s Highway” that connected all the missions of California along a single road.

During the 1820s, Father Juan Martin committed to beautifying the mission. In an effort unique among the missions, an artist was commissioned from Barcelona, Spain, and arrived to decorate the San Miguel Arcangel’s interior and exterior. These endeavors, aided by some of the Christianized Salinan Indians, can still be seen today thanks to diligent preservation efforts.

With Mexico's Secularization Laws of 1834, the church was no longer under Catholic control and was sold off by California’s governor. Unlike many of the other missions, however,  in 1831 mission leaders anticipated the onset of the Secularization Laws and freed the Indians at the mission, despite such an act being illegal under Mexican law. When the mission fell under governmental control in 1836, the Salinans and padres left the mission abandoned--the Native Americans returned to their communities as best they were ablel. A padre returned in 1839, but San Miguel Arcangel’s poor prevented him from supporting himself. Another attempt was made in 1841, when a second padre returned to the mission with 30 indians. By 1844, however, lacking livestock, crops, and other industry, this revival had also ended in failure.

When war broke out between Mexico and the United States, an American naval squadron blocked and captured the two largest nearby ports, in San Francisco and Monterey. Soon Commodore Sloat’s American occupation force was the no more than two days away from Mission San Miguel Arcangel. Sensing an economic opportunity in the waning days of his influence, Mexican Governor of California Pio Pico sold off the mission and its properties to an American who had recently arrived in California. William Reed and his family, along with a Mexican partner named Petronillo Rios, took over the abandoned mission and made use of its surviving buildings.

The California Gold Rush brought thousands of people through the area, many seeking opportunity at any cost. One group overheard William Reed brag about hidden wealth from the sale of his sheep, then murdered Reed and ten family members and household staff on December 5, 1848. Despite a search, they found no stash of hidden gold. Pursued by a posse from Santa Barbara, the were caught by the Ortega ranch on the coast. One was shot dead; another jumped to his death from a cliff; three others were captured and taken to Santa Barbara. These were (apparently) tried and put to death by firing squad on 28 December 1848. A blood-stained pillar at the Mission stood for quite some time as a reminder of the murder, and present-day ghost hunters speculate that the Reed family continues to haunt the Mission.

Following the gruesome murders, many of the mission buildings were bought by different owners and transformed into stores, a hotel and a saloon. The saloon became one of the most popular along the El Camino Real, but the days of independent ownership were numbered. The mission and most of the property was returned to the Catholic church in 1859 by President James Buchanan. WIth the return of the land to the church, a padre was installed at the mission in 1878, following a 38-year period of absence. From 1878 to the present day, the constant work of restoring all of the mission’s buildings is underway, utilizing the same methods and materials from its initial construction over 200 years ago. Today the mission serves as a museum and active parish.

In 2003, the mission was badly damaged in an earthquake. For six years it was closed in order to renovate and strengthen the buildings. In 2009, the renovated mission was re-dedicated and reopened to the public.