As the fifteenth mission established, San Juan Bautista shortened a crucial gap between Missions Santa Cruz and San Carlos Borromeo de Carmelo. It maintained a very energetic congregation despite the Secularization Laws of 1834, and remains an active Catholic church today. It was named in honor of John the Baptist and is the namesake for the town San Juan Bautista. In addition to its religious and colonial history, the mission and town became part of one of the most iconic scenes in Alfred Hitchcock's classic 1958 film, VERTIGO. 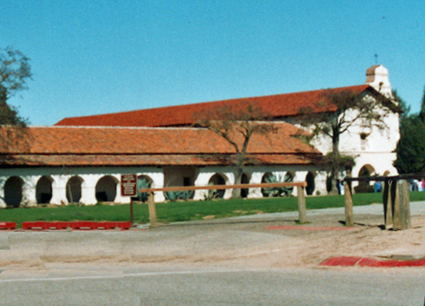 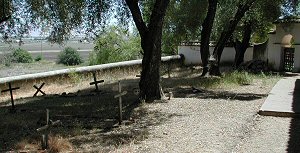 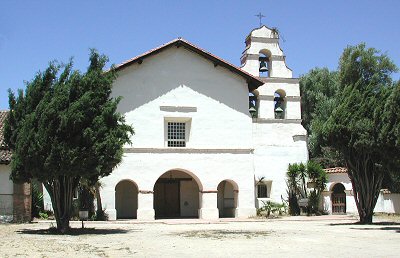 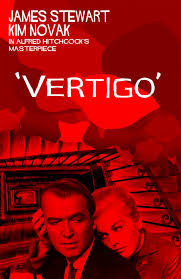 Mission with steeple reconstructed by Hitchcock for the film. 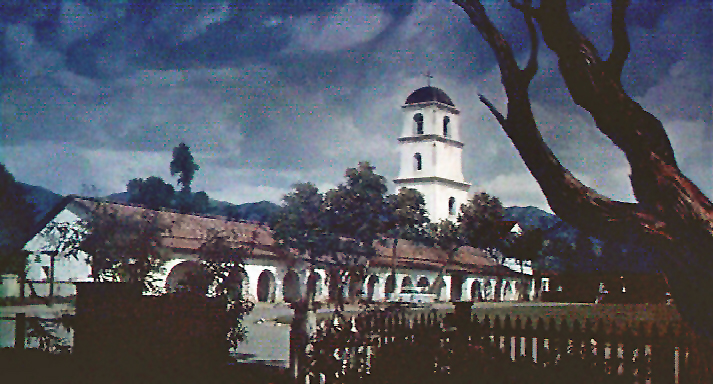 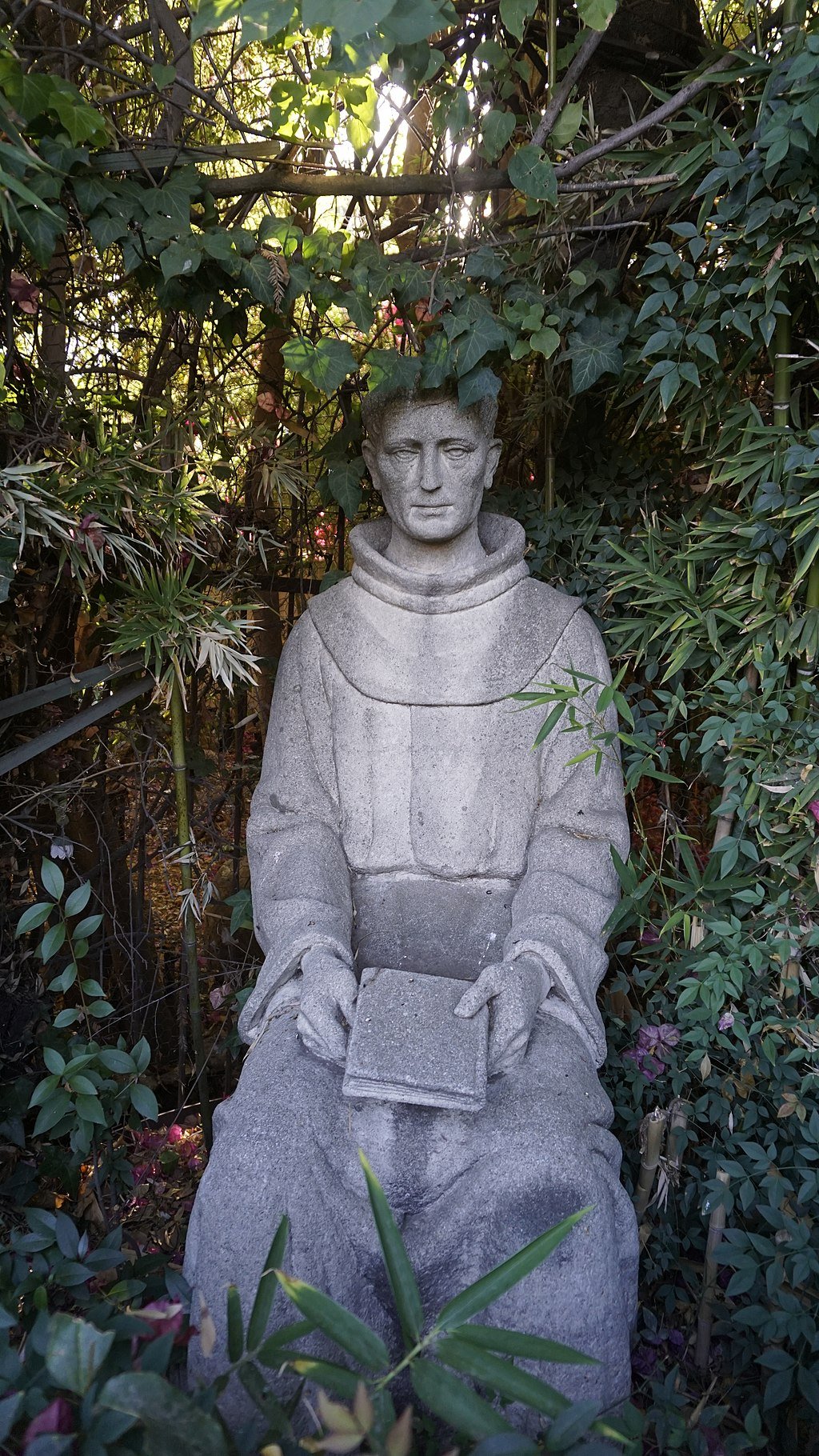 A statue of San Juan Bautista's namesake, St. John the Baptist, in front of the mission. 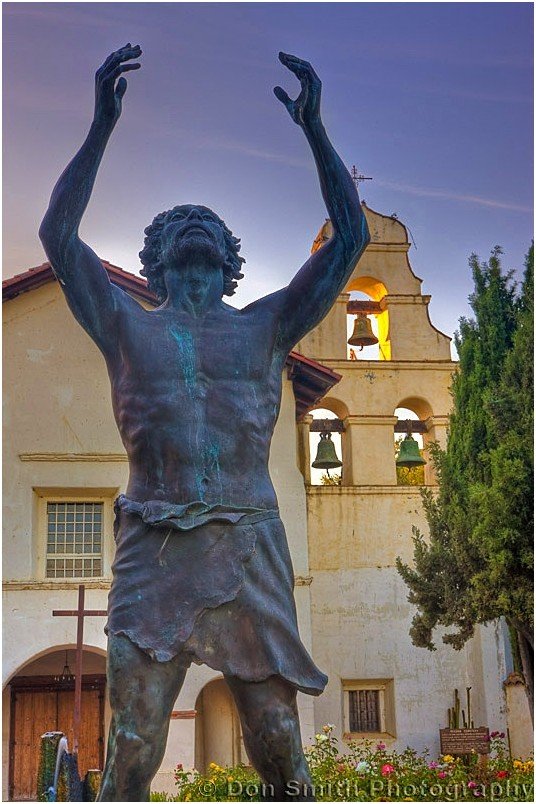 The chapel interior, which is considerably larger than most missions. 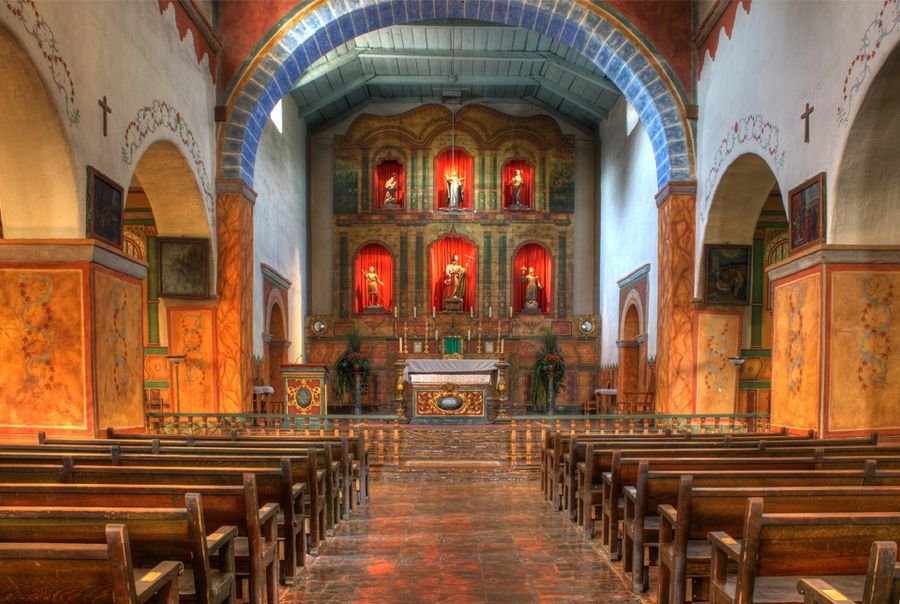 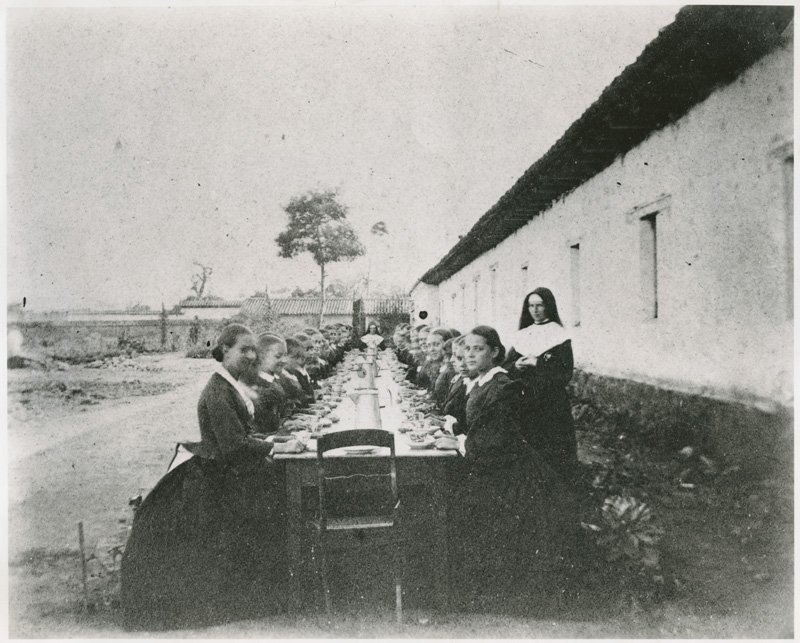 This photograph of the chapel interior from 1908 displays unrepaired damage from the 1906 San Francisco earthquake (CA State Library). 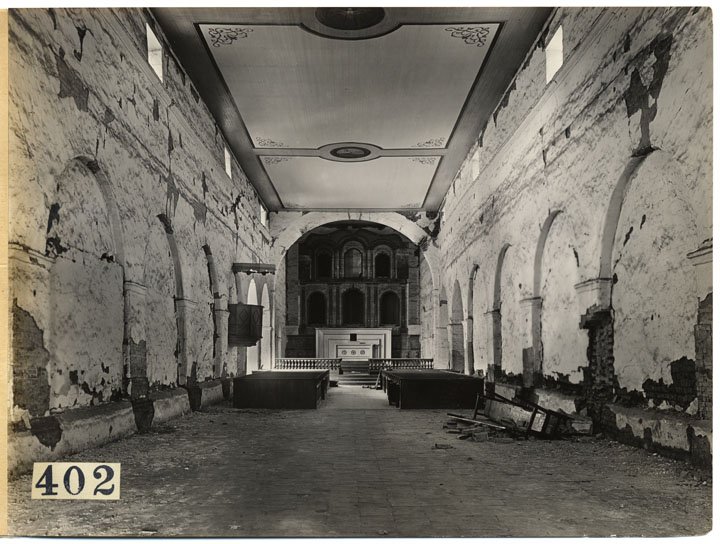 In the spring of 1797, Corporal Juan Ballesteros and five men arrived at the future mission site and commenced building a chapel, granary and houses for the padres and their military detail. Later that year, Father Presidente of the missions Padre Fermin Lasuén arrived to dedicate the mission and within two weeks, the first baptism took place--a 10 year old boy sponsored by Corporal Ballesteros. Ballesteros’ newborn son would also be the first European baptism for the mission. Unfortunately, that same newborn would become the mission's first funeral later the same year.

October 1798 brought a violent series of earthquakes; tremors at the mission were serious enough that the missionaries slept outside for the entire month. Quakes occurred up to six times per day. Unfortunately for the Spanish, the mission had been built directly atop the San Andreas fault, from which many of California’s worst earthquakes originate, resulting cracked mission walls--occasionally even chasms in the ground itselfs. A mere two years later, an earthquake destroyed the church wholesale. A larger church was soon constructed along with other facilities and completed in 1803; supposedly a bottle containing the story of the first years of the mission was laid in the cornerstone.

By that year, there were 1,036 Native Americans living at the mission. Ranching and farming activity had moved apace, with 1,036 cattle, 4,600 sheep, 22 swine, 540 horses and 8 mules counted that year. At the same time, the harvest of wheat, barley and corn was estimated at 2,018 fanegas (an old Spanish unit of dry goods measurement), each of about 220 pounds.

In 1808, Padre Arroyo de la Cuesta arrived at the mission. His envisioned a larger church. Mission churches generally are long and narrow with a single center aisle. To hold a thousand churchgoers, the design of the new church was modified to be wide, with three aisles, and a size of 72 by 188 feet. The adobe walls were three-feet thick. Padre de la Cuesta was able to preach in seven of the Native American dialects and eventually created a dictionary-like document for these native languages.

The new church was completed and dedicated in 1812, its magnificence surpassing any of the other Franciscan efforts in California. Unfortunately, the congregation had declined during construction. Given the smaller congregation and continued danger from earthquakes Padre de la Cuesta ordered that the open-arched walls be filled in, making the structure more sound during quakes and giving the church two large, separate rooms.

Padre Estévan Tápis, Father Presidente of the missions since 1803, retired to the mission in 1812. He was adept in music and developed a technique of using colored notes to aid the natives in learning. He started a famous choir of Native American boys that performed for many.

Traditions holds that in 1816, a Boston sailor named Thomas Doak jumped ship in Monterey. He is thus credited with being the first Anglo-American California resident. In 1820 he came to the mission and, for room and board, decorated much of the interior of the church. Original tiles are still on the floor and the original colors still shine today.

Father de la Cuestra had ordered a large barrel organ that arrived in 1829. It still exists in the mission. Several legends surround the organ, some of which are told during tours. De la Cuestra later retired to Santa Ines (modern-day Solvang) in 1833. By 1835, the mission was secularized following the Secularization of Laws of 1834 by Mexico, though it still operated as a parish.

In 1839, this mission and the small pueblo, or community, officially became the town of San Juan Bautista. During the Gold Rush, the town was able to prosper somewhat, even receiving the first visit from an American President, James Buchanan, in 1859. That same year, the mission was reconsecrated by the Catholic Church and placed under the Diocese of Monterey. A new belfry was constructed in 1865.

During the San Francisco Earthquake of 1906, the church and two outside naves were damaged, the latter of which were abandoned. The belfry was remodeled in 1929, and the state of California established San Juan Bautista Historic Park to preserve and restore the mission and over 30 historic buildings in the town. All can be visited today. The Hearst Foundation financed an additional restoration that brought the church back to its original form in 1949. Steel beams were hidden in the structure for earthquake protection and the side aisles were restored, and the bell wall, or “campanario,” was also completed.

The mission includes a cemetery, where the remains of over 4,000 Native American converts and Europeans are buried.

The mission and its grounds were featured prominently in the 1958 Alfred Hitchcock film Vertigo after associate producer Herbert Coleman's daughter Judy Lanini suggested the mission to Hitchcock as a filming location. A steeple, added sometime between the mission's original construction and secularization, had been demolished following a fire, so Hitchcock added a bell tower using scale models, matte paintings, and trick photography at Paramount Studios in Los Angeles. The tower does not resemble the original steeple, and the tower's staircase was built on film stages at Paramount.