The twelfth of the Spanish missions established in California, despite being well-situated near a wealth of resources, was plagued by many issues throughout its tenure under the Franciscan friars who founded it. Floods, earthquakes, Native American attacks, and pirate raids all contributed to its precipitous decline after secularization, resulting in Mission Santa Cruz being largely abandoned after 1835. Though the original is long gone, a replica chapel now stands near the site, and a marker indicates the location of the stone church built in 1793 by the Spanish padres and Native American neophytes.

"Pirate" Hippolyte Bouchard, an Argentine national hero who was licensed as a privateer to raid Spanish commerce and settlements, attacked nearby Monterey in 1818. Santa Cruz was evacuated in fear the mission there would be next. 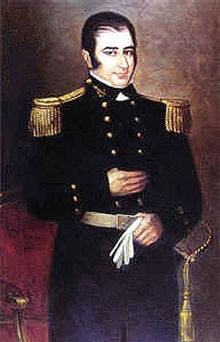 An 1850s painting by Leon Trousset which still hangs today in the mission. As the oldest illustration of Santa Cruz, it was instrumental in creating the present-day scale replica. 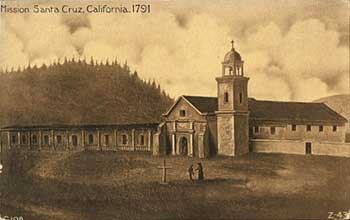 An 1878 sketch of Mission Santa Cruz's layout. By this time, most of the original structures had fallen victim to multiple earthquakes. 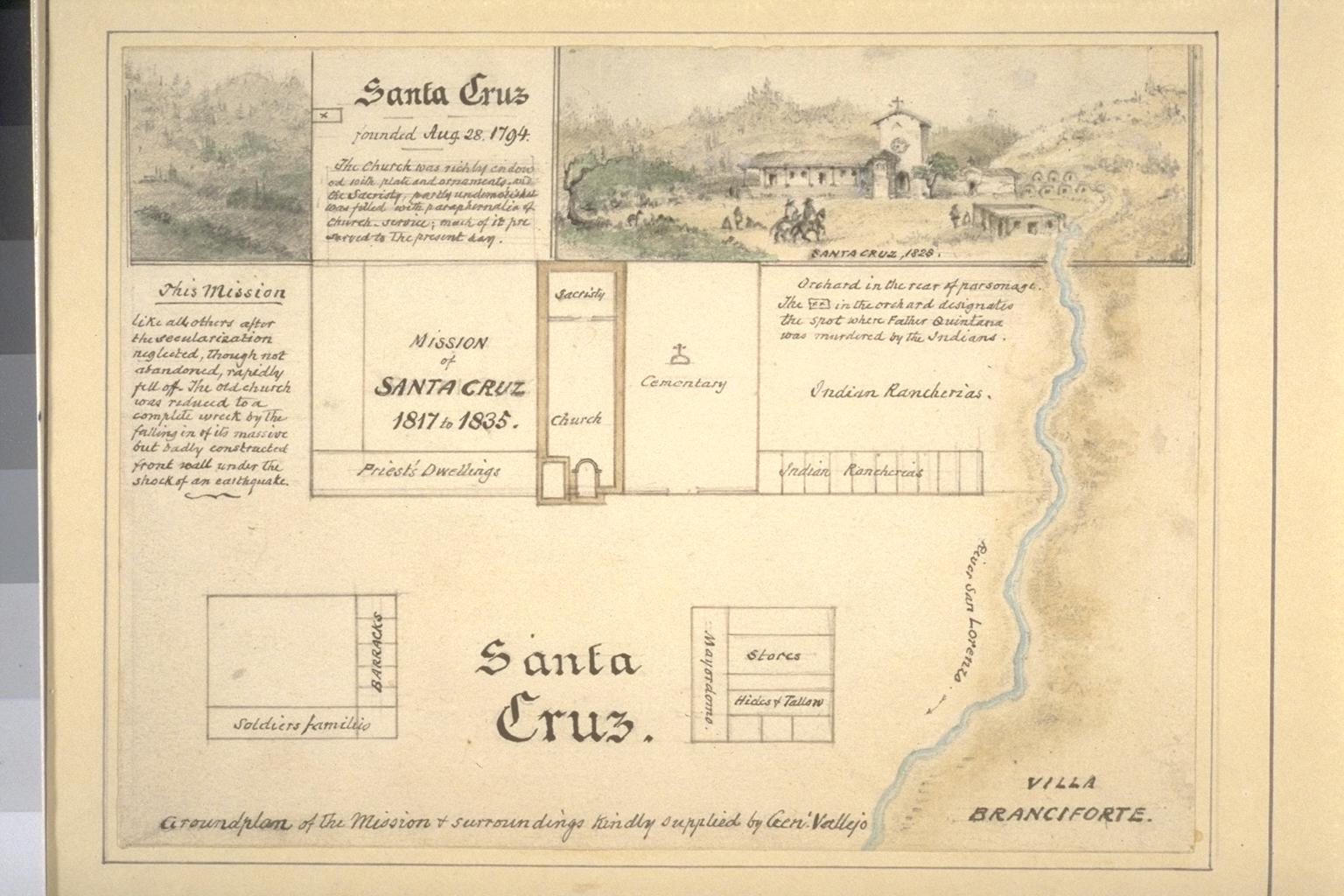 A marker delineates the site of the original mission near the present-day replica. 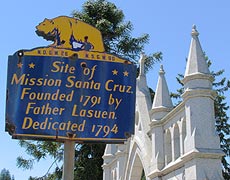 The replica mission near the original site is approximately half the Mission's original size. 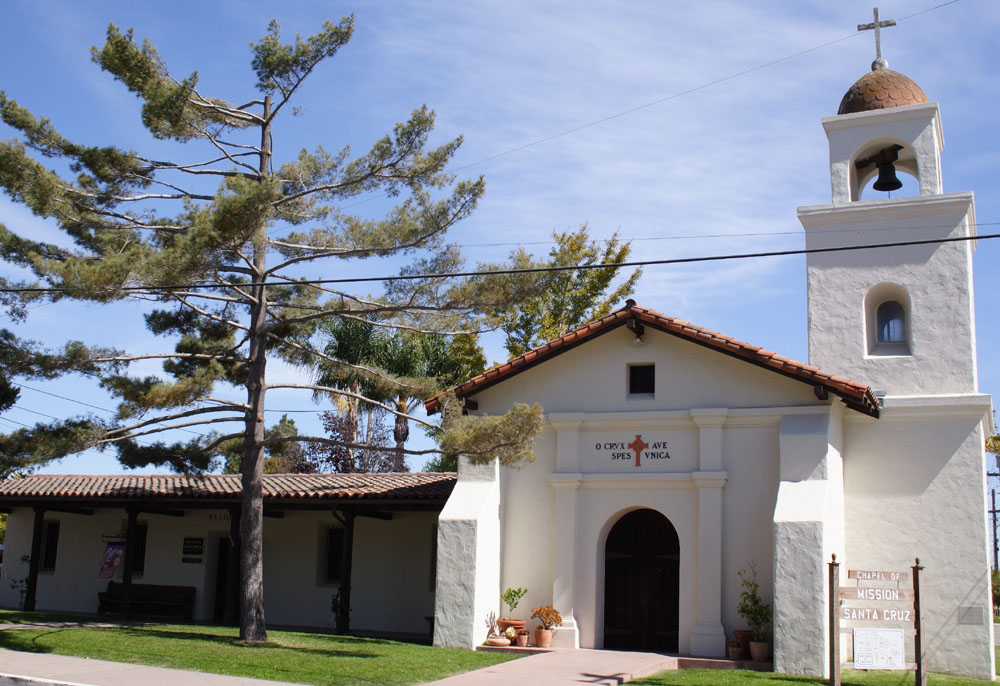 An 1870s photograph of the Catholic church built on the site of the Mission, taken by German artist and photographer Edward Vischer (Claremont Colleges). 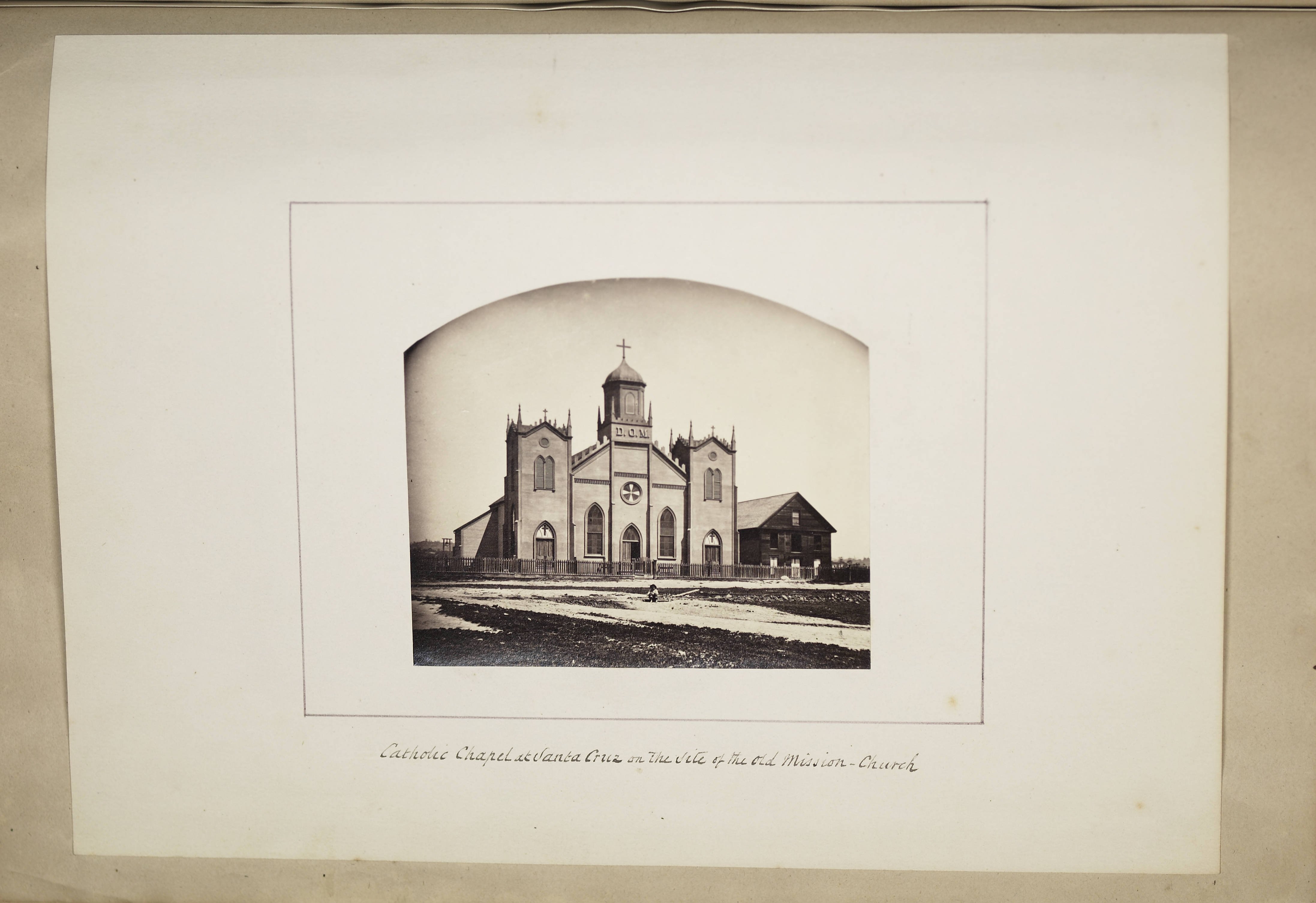 A newspaper clipping from July 6, 1933, describing the funeral of Gladys Sullivan Doyle at the replica mission the previous day. Doyle donated all costs for the reconstruction during the previous two years, on the condition that she be buried at the new c 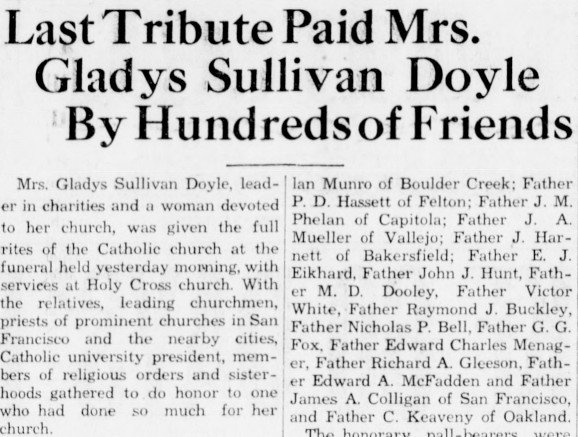 Mission Santa Cruz was established on the 28th of August in 1791 by Padre Fermin Francisco de Lasuén, successor to the first Padre-Presidente of the California missions, Padre Junipero Serra. With Native American laborers borrowed from nearby Mission Santa Clara de Asis, construction began on temporary wooden structures that would facilitate the building of a permanent chapel. This temporary town, however, was built on the flood plains of the San Lorenzo river, and the rainy season of 1791 resulted in heavy damage to the settlement. The padres moved the mission to a new site on a nearby hill. The stone foundation for an adobe chapel with walls five feet thick was laid in 1793.

Santa Cruz’s second major misfortune came later that year when a powerful local tribe, the Quiroste, raided the Mission in December after two years of escalating hostilities around the Bay Area. It is the only recorded attack on a northern mission to have concentrated on the mission itself, instead of outlying settlements. Of the attack, Padre-Presidente Fermin Lasuen wrote:

“I have found out for certain that on the night of the fourteenth of last December the pagan Indians, and some Christian Indians, from the rancherías to the northwest of that mission made an assault on the guard, wounded the corporal in the hand, and another soldier in the shoulder, and set fire to the roof of the corral for the lambs, and the old guard house. The corporal fired a few shots, and with that they withdrew without serious injury to either side. The motive they have given is this, that the soldiers had taken away to San Francisco various Christian Indians belonging to that place who had been fugitives from there for some time, and that they had taken a Christian Indian woman away from a pagan man, and it was he who was the principal instigator and leader of the disorder.”1

In response, soldiers from the presidios in San Francisco and Monterey came to the aid of the mission, touching off reprisals and searches for the culprits behind the December attack. Eight Quiroste Indians identified as the ringleaders were captured, among them several tribal leaders. They were sent south to the presidio in San Diego were they died in captivity in 1798. With this, organized Quiroste resistance to Spanish colonization appears to have ceased.

The mission continued to grow, and in 1795 the traditional quadrangle, forming a courtyard alongside the chapel, was completed. But here Santa Cruz’s expansion appears to have peaked, reaching a maximum population of 523 in 1797--ranking among the bottom fourth of California mission populations. Worse still one of the Franciscan friars, Padre Andres Quintana, had a penchant for physical abuse, and was known to use a metal-tipped whip to punish Native American laborers. In 1812, an angered group of Native Americans beat Quintana to death and disfigured the corpse. His death prompted the first autopsy performed in California.

In addition to setbacks such as these, another reason for Santa Cruz’s stunted growth may have been the nearby town of Branciforte. Built by the Spanish government to entice colonists, Branciforte was soon populated by a group of ex-convicts from Guadalajara and swiftly became known for its rampant gambling, drinking, and a penchant for drawing neophytes away from the padres’ flock at the mission. Matters came to a head when, in 1818, Santa Cruz was warned of the approach of Argentine corsair Hippolyte Bouchard, who was then marauding the coast of California with two warships as part of Argentina’s fight for independence against Spain. The mission’s inhabitants swiftly evacuated. Bouchard never landed at Santa Cruz, electing instead to pillage Monterey for six days before sailing south for Santa Barbara, but many of the mission’s valuables were looted in the confusion. It has long been suspected that the denizens of Branciforte were the perpetrators.

Despite its many setbacks, Santa Cruz was still known as an exceptionally beautiful mission. French sea captain Auguste Duhaut-Cilly, stopping at the mission for trade and supplies in early 1827, remarked:

“No location could be prettier than that of this mission. From the shore the ground rises in steps so regular that one might think them the terraces of a fortification. But I doubt whether the grass-covered revetment of an artificial work could ever attain to the beauty of this greensward, like a carpet of green velvet spread over the steps  of a throne. The buildings sit on the third terrace, fronting the sea and with backs to a dense forest of great conifers, which contrast with the brilliant white walls.”2

Nevertheless, the mission had entered a slow decline. With its very small population, it was unable to survive its secularization by the Mexican government in 1834, unlike other missions that were able to persevere. An earthquake in 1840 damaged the chapel and quadrangle, and the massive Fort Tejon earthquake of 1857 collapsed the structure beyond repair. The only remaining building--known as the Neary-Rodriguez Adobe--was a dormitory for Ohlone and Yokut neophytes who lived at the mission, which remains in Santa Cruz Mission State Historic Park and can be toured during operating hours.

New churches, unaffiliated with Mission Santa Cruz, were later built on the site. Not until 1931 did philanthropist Gladys Sullivan Doyle propose to construct a half-size replica of the original Mission. From her private funds she contributed all the construction costs on the condition that she be allowed to be buried inside--which followed upon her death in mid-1933, prompting a funeral attended by 29 clergymen and a dozen representatives of the California Historical Society. Her grave can be viewed in a small side room. The concrete construction was performed by parishioner Tranquilino Costella, an Italian immigrant, whose contractor stamp can still be seen in the sidewalk in front of the mission.

The small replica chapel is mainly used for private services, daily Masses and Morning Prayer on Saturday. It was damaged during the Loma Prieta quake of 1989, but was easily repaired.

2. Duhaut-Cilly, Auguste. Translated by Fruge, August and Harlow, Neal. A Voyage to California, the Sandwich Islands, and Around the World. Berkeley, California. University of California Press, 1999. pp. 65-66

3.Forbes, Alexander (1839). California: A History of Upper and Lower California.