Summersville Dam & The Town of Gad

Deep below the crystal clear water of Summersville Lake once sat the small farming town of Gad. However, in the early 1960s the residents of the town were bought out to make way for the construction of a new dam and reservoir. Flood control is the primary function of this dam in Nicholas County, West Virginia, with the added luxury of providing a fantastic recreational site in the form of a lake. The reservoir has become a tourist destination and is among the most popular of West Virginia's mountain lakes. Additionally, the dam has been retrofitted to produce hydroelectric energy. 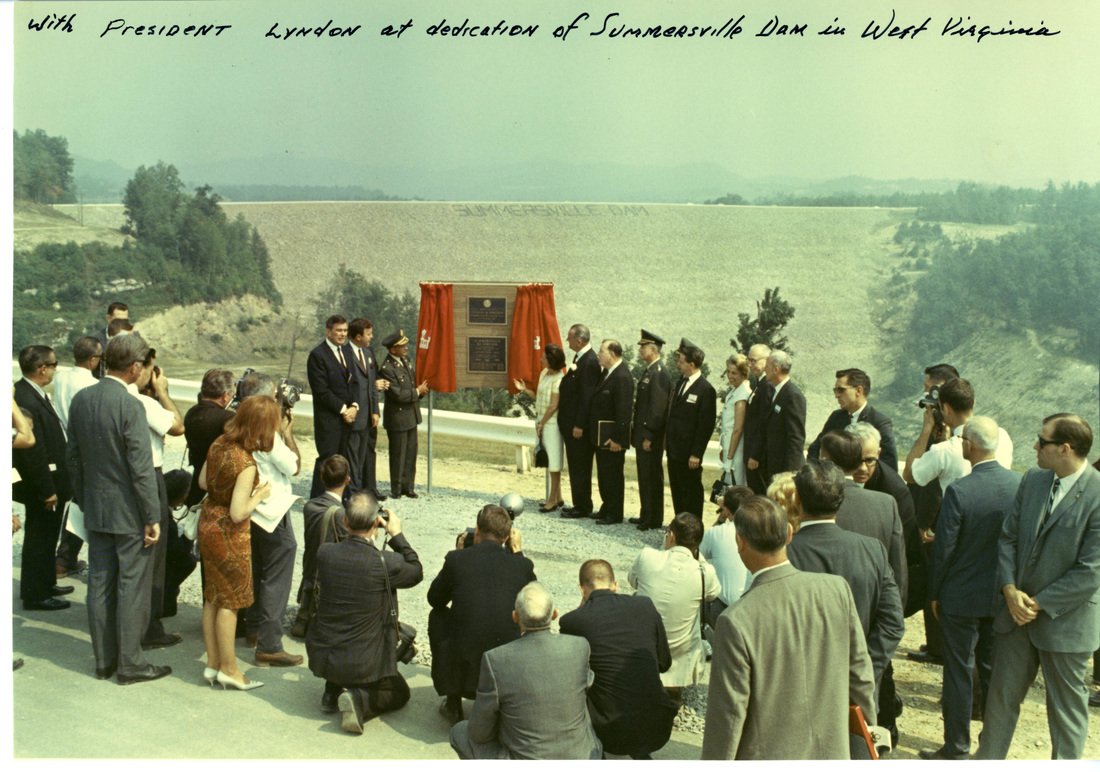 President Lyndon Johnson at the dedication ceremony for Summersville Dam.1 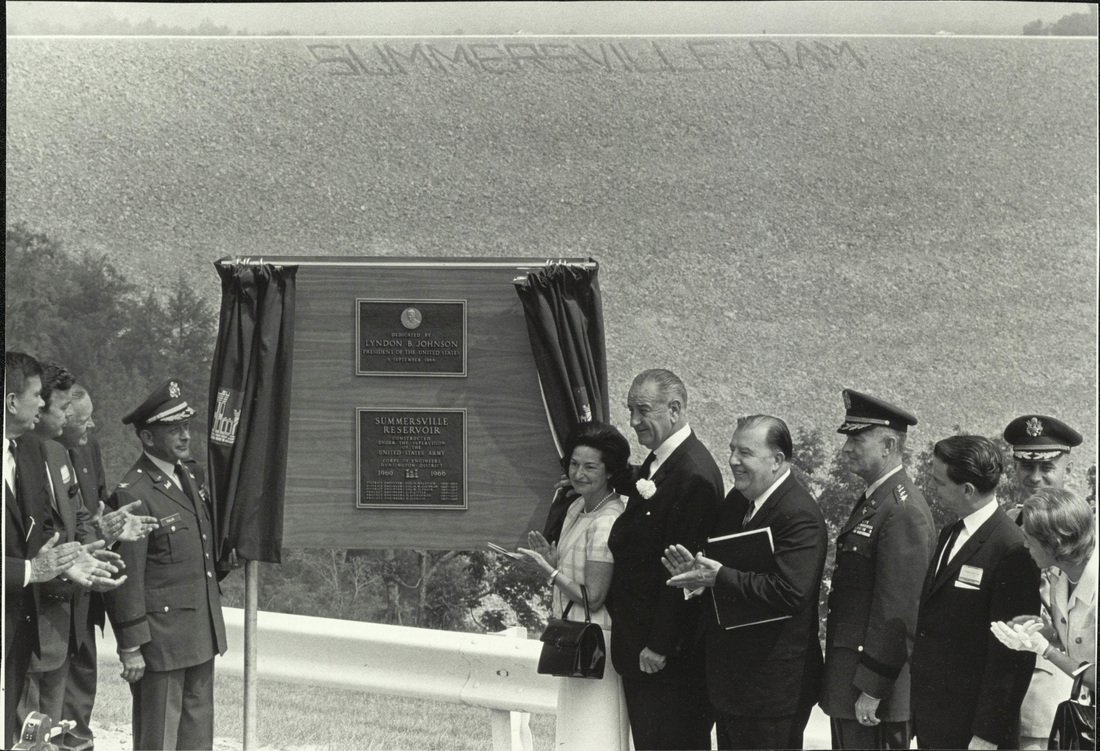 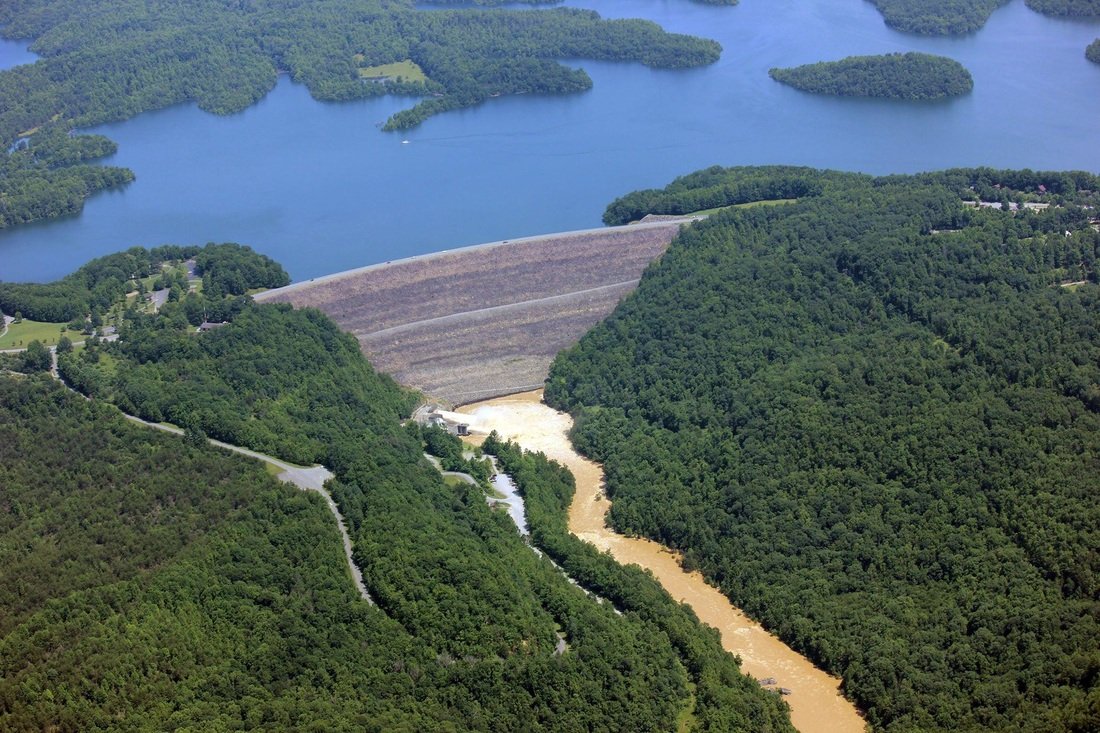 Constructed by the U.S. Army Corps of Engineers, the dam controls 803 square miles of water.  It is of earthen construction, built as a rock-filled dam and the second largest of its type in the Eastern United States. The height of the dam is 390 feet tall and 2,280 feet long. The cost of building the dam was 48 million dollars.  By 1974 it had paid for itself by saving millions in potential damages that would have been caused by flooding along the Gauley River up to the Kanawha Valley. Summersville Lake covers over 2,700 acres and provides 60 miles of shoreline. Water released from the dam is controlled and released at a minimum of 100 cubic feet per second and a maximum of 18,000 cubic feet per second. In September of each year, water releases turn Gauley River into a challenging, world-class whitewater rafting destination. 2.

Construction of the new dam was authorized under the Flood Control Act of 1938, a crucial piece of legislation that allowed development of most of West Virginia’s dams. The actual work on the new project began in the February of 1960 with a tunnel that diverted the flow of the Gauley River for the duration of the project. The work on the actual dam and its spillway did not start until May of 1961 when crews began to work to move the 12 million cubic yards of rock and earth that compose the dam.[3] A hydro-electricity generating scheme was started in 2001 to harness the tremendous power from the water from the dam releases. A pipe that is 28 feet in diameter has water gushing through it and generating large amounts of energy each year. Humming generators have replaced the former thunderous noise that accompanied the gushing water.

Upon its completion in 1966 a dedication ceremony was planned for the new dam, which at the time was the largest of its kind east of the Mississippi. Although the dam was a modern marvel at the time, it possesses a more significant meaning than just flood control. It represents an achievement of Lyndon Johnson’s Great Society. The promised revenue from tourism provides an economic boost for nearby Summersville and Nicholas County. U.S. Senator Jennings Randolph and U.S. Senator Robert C. Byrd had both pushed for construction of the project in Congress. At the dedication ceremony attended by the president and the entire West Virginia congressional delegation, LBJ made the following remarks:

“Here today God has blessed you, and you are blessed, with one of the few successes. As we look out at this magnificent new dam and reservoir to our backs, I have renewed hope that still other resources--the power of science and the determination of man--will, along with a little prayer and a good deal of dynamite, empower us to quench the thirst of generations to come.”[4]

The town of Gad once stood along Gauley River, but is now beneath the depths of Summersville Lake. In the early 1960s, the small farming village had to be flooded and submerged to complete the construction. Traditionally, the Corps of Engineers named a dam after the nearest town or city. The name "Gad Dam" was considered briefly. However, given the potential controversy of that name, it was widely decided against in favor of the nearby town of Summersville. People still have strong memories of the small town of Gad that they once called home. (Information contributed by Jessica Rinehart)

Presently, Summersville Lake is one of the most popular tourist attractions in the entire state of West Virginia supporting a wide range of recreational activities like camping, fishing, boating, swimming, hiking, and even scuba diving. Also, the lake is within a short drive from other tourist attractions such as the New River Gorge Natioinal River and Carnifex Ferry State Park and Civil War battlefield.