The Japanese Occupation Site is the location of one place where the Japanese Imperial Army landed on American soil. The Japanese stayed there for quite some time after a battle on June 7, 1942. They departed on July 28, 1943. The U.S. occupied the deserted island Aug. 15, 1943. It was named a National Historic Landmark in 1985, making it one of eight WWII sites located in Alaska alone. It can be found on the Rat Island Group that is part of the Aleutian Chain. Kiska was one of two Aleutian Islands that were captured by the Japanese; Attu was the second island. 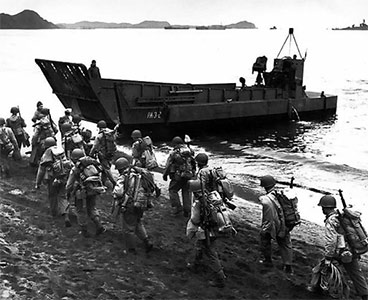 Japanese Occupation Site at Kiska Island; the Japanese raising their flag on the island. 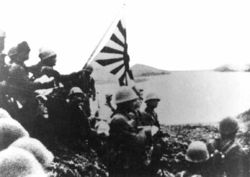 The team that was present on Kiska Island prior to the Japanese' arrival. 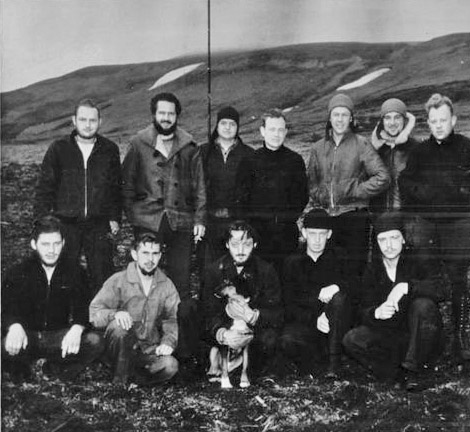 When the Japanese attacked Kiska, the only people on the island were members of the U.S. Areological Detail who ran but were caught in just a matter of days. Senior Petty Officer William C. House avoided the Japanese for fifty days, surviving on plants and worms alone but eventually, when he weighed just eighty pounds, he decided to either give up or die from lack of food; he chose to give up. In 1943, the 11th Army Air Force and Navy Patrol Wing 4 launched 7,000,000 pounds in bombs on the Japanese at Kiska. Several of those flying the planes had just finished their education on how to fly. Those flying the planes had to deal with retaliation from Japanese pilots and the fickle weather of the island. Fog, strong winds, and extreme cold caused many fatalities. The constant Allies attacks on the island, plus an Allied blockade had a devastating effect on the Japanese’s connection between Kiska and Attu and helped make possible an attack by American and Canadian troops in August 1943.

At Kiska the Japanese planned their retreat 29 July 1943. Along with setting up explosives at “Kiska City,” they demolished necessities, ammunition, and structures. In the night, Allied ships around Kiska were distracted by signals that they took as Japanese forces fleeing. However, while they were focused on this, the actual fleeing took place through Kiska Harbor. It only took the more than 5,000 Japanese 55 minutes to flee.

When almost 35,000 Allied soldiers arrived at Kiska on August 15, 1943 they were surprised to not find any Japanese; all they found upon arrival were six dogs, one being “Explosion” who had been owned by the Kiska Areological Detail and was then looked after by the Japanese during their stay on the island. The Allies were reluctant to accept that absolutely no Japanese were still on Kiska. Therefore, the next eight days consisted of the soldiers looking around the island. While doing this the soldiers would shoot their guns in the bad weather conditions causing some of them to be mistakenly shot by fellow soldiers; twenty-four died due to this, four more died when they met the tricks that the Japanese left behind, and then another seventy-one perished when the Abner Read hit a mine resting in water. There were 168 Allied troops that were injured or became sick while at Kiska. This Aleutian Campaign was named as a practice fight and it stopped following 439 days of fighting.

Today, the island is part of several that are covered by the Aleutian World War II National Historic Area. The area is generally off-limits to the general public, with only the military making regular trips. A plaque honoring those who fell during the occupation was placed there in 1983.

Japanese troops raise the Imperial battle flag on Kiska Island in the Aleutians on June 6, 1942. http://www.nps.gov/archive/wapa/indepth/extContent/wapa/guides/first/sec1.htm