Located in Albuquerque's historic Barelas neighborhood, the National Hispanic Cultural Center preserves and interprets Hispanic art and culture through a variety of exhibits and galleries. The Center also offers lectures, special programs, and concerts. The Center opened in 2000 and has expanded to include both indoor and outdoor exhibits and performance spaces, as well as a popular restaurant that offers authentic cuisine. The museum offers special tours for groups with advance notice, and also offers an expansive research library with over 12,000 books and many other resources. The Center also includes a gift shop that offers books about Hispanic art, culture, and history, in addition to jewelry, music, art, and home décor. 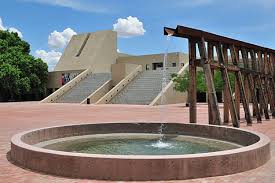 This Torreón Fresco is the Center's signature piece. Inside this structure is a 4,000 square foot fresco Frederico Vigil that depicting the evolution of Hispanic culture over three thousand years. 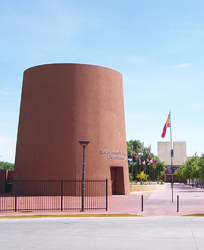 The neighborhood of Barelas has been home to many Hispanic residents in Albuquerque for over a century. Like many urban neighborhoods, Barelas was harmed by the decisions of city leaders and urban planners, but also assisted by the traffic that was once brought to the area thanks to its location along Highway 66. The neighborhood found its fortunes declined with the creation of interstate highways that both bypassed and bisected the neighborhood. In 1970, the railroad shops closed in the area, which eliminated 1500 jobs. Since the 1980s, the area has experienced a slow resurgence due to growing demand for housing near downtown.

This neighborhood was originally the site of an important river crossing on the trade route El Camino Real de Tierra Adentro, which was the main Spanish trade route through New Mexico. Spanish for The Royal Road of the Interior Land, the route ran 1,600 miles between Mexico City and San Pueblo, New Mexico between 1598 and 1882. The El Camino Real de Tierra Adentro improved trade between Spanish villages and enabled conquistadors to spread Christianity over a wider area more quickly.

Spanish settlers began traveling to New Mexico during the sixteenth century. The first of these conquistadors was Francisco Vázquez de Coronado y Luján, who came to New Mexico in search of the mythical Seven Cities of Gold. The first Spanish colonial settlement was established in 1598 and was called San Juan de Los Caballeros. The settlement of Albuquerque was founded in 1706 and was named after Spanish Duke de Albuquerque.