The Maine Narrow Gauge Railroad Company and Museum is an educational and event-packed railroad history museum located along the Casco Bay waterfront. Unlike other railroad history museums, the Main Narrow Gauge Railroad Company focuses on the story of the two-foot gauge railroad equipment popular in Maine in the late-19th and early 20th-centuries.. From the 1870s to the 1940s, nearly 200 miles of narrow gauge tracks were serving many of Maine’s smaller communities, bringing passengers, cargo, and even mail. The Maine Narrow Gauge Railroad Company and Museum preserves and actually operates the narrow gauge legacy, and the museum features daily train rides, exciting community events, and a myriad of exhibits and artifacts showcasing Maine’s intricate relationship with the railroad.

Locomotive No. 4 sitting outside the museum 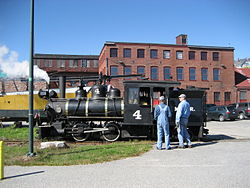 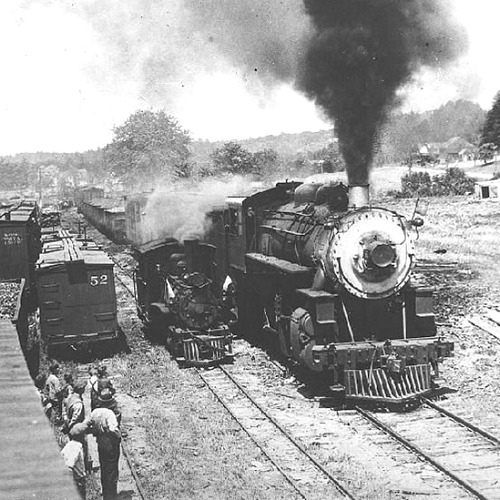 The only known surviving copy of the B&B's 1877 timetable, from the archives of the Billerica Historical Society.

Trains operate daily at the museum 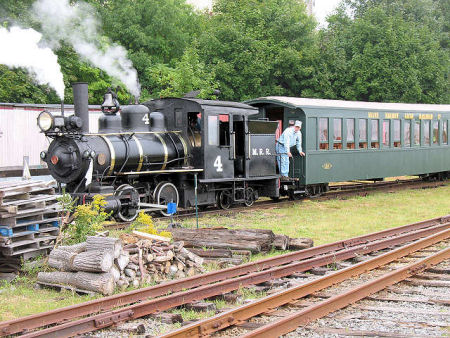 The Maine Narrow Gauge Railroad Company and Museum preserves the unique history of the narrow gauge so popular in the state during the last century, which brought economic benefits to smaller Maine communities. Maine experienced a railroad boom in the latter part of the 19th century, with five railroads serving the rural parts of the region and bringing both freight and passengers.

These railroads cracked open the resource-rich interior of the state and brought economic prosperity to smaller, more remote Maine communities--particularly through the timbering industry. At the same time, the two-foot railway attracted tourists and gave rise to an robust tourism industry.1

The idea of two-foot rails in the United States was brought about by George Mansfield, a prominent citizen from Hazelhurst, Massachusetts. During a trip to Wales in the 1870s, Mansfield saw how the 23.5-inch-wide Festiniog Railroad supported small community economies in the Wales countryside.

Returning to Massachusetts, Mansfield promoted the benefits of the narrow gauge railroad, and by 1875 he had established the Billerica & Bedford Railroad. This was America’s first narrow gauge railroad, gaining its charter in 1876. Within a year, under the management of Mansfield, the Billerica & Bedford Railroad constructed lines between North Billerica and Bedford.2

Over the next 50 years, two-foot railways became ubiquitous for both industrial and tourism purposes. Beyond these peaceful employments, the greatest concentration of narrow gauge rails supplied the Trenches in Europe during WWI. Other historic narrow gauge railways include the Darjeeling Himalayan Railway in India,  Chicago Tunnel Company's network under the Chicago Loop, and the Maine two-footer lines.

Founded in 1992, the Maine Narrow Gauge Railroad Company and Museum has developed a mission to preserve the equipment and artifacts of the state’s prominent railroads. Additionally, the museum keeps the history of this economic facet of rural Maine alive through educational events, exhibits, and a variety of community outreach programs.

The museum attracts more than 33,000 visitors annually, and operates a 1.5-mile-long railroad running along the Casco Bay waterfront and Portland's Eastern Promenade.3  Visitors to the museum can enjoy train rides aboard historic railcars from the early 20th century and explore the many artifacts and exhibits detailing the interesting nuances of railroad culture in Maine and abroad.

The museum also hosts a variety of exciting events for both the local community and tourists. These events include “All Aboard” Story Time on Thursday mornings at 10:30am, Train Day, Ice Cream Train, Rails and Ales (beer tasting with a train ride), Pumpkin Train, and the most popular event of the year - The Polar Express ride that features Santa Claus, holiday decorations, hot chocolate and cookies, and more, all on a train ride to the “North Pole.”4