Baker's Chapel United Methodist Church is a historic church located in Hernando, Mississippi. First established as California Episcopal Methodist Church South in 1852, the church was renamed in 1857 for pioneer preacher German Baker. The church eventually added a cemetery to the grounds and a Sunday School program to the services offered, expanding the church and the ways it served the community. The original church building was destroyed by a tornado in 1939. The building present on the grounds today was built by the congregation in 1952.

The original church building constructed in 1852 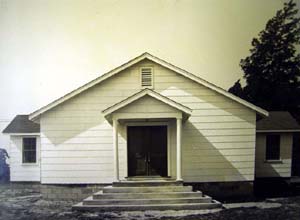 The church building present at the site today 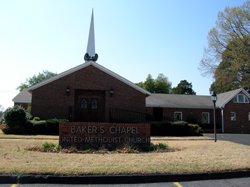 A historical marker located outside the church

Baker's Chapel United Methodist Church was established in 1852. The church was originally named California Methodist Episcopal Church South, a name deriving from those who established it. The church's founders were settlers traveling to California. Upon arriving in what is Hernando, Mississippi today, some settlers stopped to rest and eventually decided to stay. Those who stayed established the church in 1852.

Several years after its founding, the church was renamed to Baker's Chapel. This name change, which occurred in 1857, was to honor the church's preacher, German Baker. The church continued to grow and expand throughout the following years. A cemetery was added on the grounds in 1860. Known as Baker's Chapel Cemetery, it is still in use today. The cemetery is known to contain nearly 500 memorials with dates ranging from the early years after the church's founding to present day. In addition to the cemetery, the church grew to include a Sunday School program in the 1880s. This program allowed the church to expand its methods of teaching and reaching others.

The building that stands on the church grounds today is not the building that was originally used as the church. In 1939, the original church building was destroyed by a tornado. The congregation planned to rebuild the church after the tornado hit, but they were delayed in their efforts by World War II. In 1952, the members were finally able to rebuild their beloved church. Built on the same grounds as the original, Baker's Chapel United Methodist Church serves the surrounding community to this day.