Built in 1883, the Bent’s Old Fort was originally built as a means of trading between Native Americans and trappers. As this was the only permanent settlement on the Santa Fe Trail, it was used by U.S. Army troops as a means to stock up on supplies as well as conduct maintenance on their wagons if needed. During the Mexican-American War in 1846, the fort was occupied by Colonel Stephen Watts Kearny's Army of the West. It would be totally destroyed three years later and replaced with a historic park memorializing it. 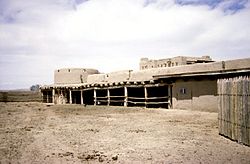 Bent's Old Fort was a major trading settlement that stopped along the Santa Fe Trail. William and Charles Bent built the fort in 1833 for trading with the Cheyenne and the Arapaho Plains Indian tribes as well as trappers. It was the only permanent settlement not under the jurisdiction and control of Native Americans or Mexicans. From 1833-1849, the fort was a place of safety and was an essential spot for military troops, explorers, and tradesmen. Explorers Kit Carson, John Fremont, and many others used to frequent the fort to replenish their supplies.

In 1846, the U.S. Army used the post as a staging base for their conquest of New Mexico. That summer, General Stephen W. Kearny and his Army of the West rested at the fort before proceeding to overtake New Mexico. Because of the territory’s reputation as a neutral area, the post was a natural meeting place for southern Plains tribes and U.S. military officials.

After General Kearny and his men left the fort, many wagon carts showed up with their horses and mules eating too much in the fields. The company was not paid back what it was due and business with the Native Americans took a hit, because they were cautious of so many white people being at the fort. Many people flooded into the area killing the buffalo, ruining the water, diminishing limited fodder, and taking advantage of lumber.

During the Mexican-American War (1846-1848), Mexico did battle with the United States following the States annexing Texas from their country. One of the states it look place in was New Mexico and the fort was used to house American troops. Mexican forces attacked the States causing Congress to declare war on their southern enemies. The war ended with America’s victory with the signing of the Treaty of Guadalupe Hidalgo and Mexican recognition of America’s sovereignty over Texas. The fort would collapse in 1849 never to be seen for years.

The fort was reconstructed in 1976 and was then opened to the public as a historic park. It covers approximately 799 acres of the land it was built on. Paintings and historical drawings of the park are put on display around the park. There is also historical material kept there as well. There are slap stage performers here that recreate the fort’s building to the use of it during war to the rebuilding of it.