The River Road African American Museum in Donaldsville, LA is dedicated to preserving the history and culture of rural African Americans living on plantations along the Mississippi River as well as African Americans who were free during the period of slavery. This museum provides a unique perspective on the experience of African American slaves: plantation life is not romanticized and the museum strives to present an accurate representation of that particular lifestyle and rural African American life in general. Emphasis is placed on all African Americans who contributed to this area of Louisiana known as “plantation country”. Permanent exhibit highlights include Monde de Coleur Libre (Free People of Color), African Influences on Louisiana Cuisine, Rural Roots of Jazz, Louisiana Black Inventors, Rural folk artists, Underground Railroad in Louisiana, Reconstruction and Politics, History of Black Education, Rural Black Doctors, and Slave Inventories. A variety of tours is also available and is tailored to suit the needs of the patrons attending. Other areas of interest include The Freedom Garden and the option to go on a museum scavenger hunt. Group tours are available and various events take place at the museum throughout the year. 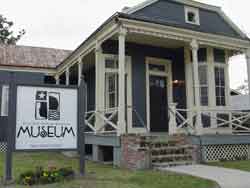 The River Road African American Museum opened to the public on March 12, 1994. Founder and director Kathe Hambrick returned to Louisiana in 1991 after living in California and found that no facilities existed that offered information about African Americans who lived on plantations and free African Americans who lived in rural areas along the Mississippi. The original museum was housed in a room in the main home of the Tezcuco Plantation until 2002 when a fire broke out that completely destroyed the home. The museum then relocated to the historic town of Donaldsville. 1

The Free People of Color exhibit is dedicated to the lives of persons of mixed descent (African, European, and/or Native American) who were known as “free people of color” 2 The exhibit showcases lists of persons who obtained freedom in Ascension Parish or who moved to the parish as freepersons along with their occupations, skills, and property ownership. A book was published in 2006 that includes prints of various primary source documents featured in this collection.

The African Influences on Louisiana Cuisine offers an interesting look at Creole or Cajun dishes and explores the history of how this style of cooking came to be. The exhibit explores food origins and includes photos, recipes, and other artifacts from rural families living in the region. 3

The Rural Roots of Jazz exhibit places an emphasis on lesser known jazz musicians who hail from the rural Louisiana Parishes: Ascension, Assumption, St. James, St. Charles, and St. John. Some of the local musicians featured are Joe King Oliver (who was Louis Armstrong’s mentor), Plas Johnson, and Bill Summers.4

Other fun options for patrons include a visit to The Freedom Garden and two scavenger hunts which are available to download on the museum’s website and also included in the resources listed below. Scavenger hunts are designed with teachers and students in mind but would also be suitable as a family activity.

The Freedom Garden allows patrons to view and learn about the various plants that grow in the region that were most commonly used by travelers of the Louisiana Underground Railroad. 6

Group tours by appointment. (Groups under 5 people don't need to make an appt.) All other tours: Sat. and Sun 1pm to 5pm Admission $5.00 All group tours must call for an appointment or email.