Completed in 1933 as one of the New Deal's public works projects, this federal building and courthouse was the final building designed by local architect Reuben Harrison Hunt. At the time, the construction cost just over $490,000. The building is constructed in an Arte Moderne style with references to the sleek architecture of the period as well as more classical influences. The Solomon Courthouse is also well known for the cases that have been tried here such as Mapp et. al vs. the City of Chattanooga, which is credited for the beginnings of desegregation in the area.

Six years after its completion, the American Institute of Architects listed Chattanooga's federal courthouse as one of the most impressive public buildings completed in the previous two decades. 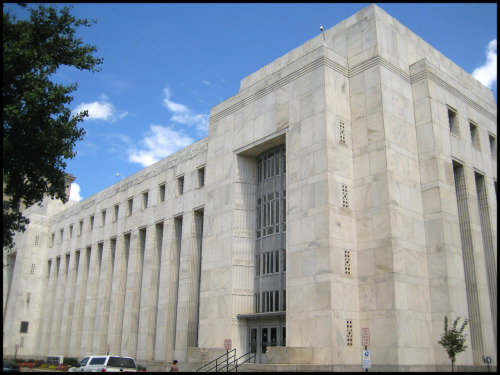 Franklin Roosevelt's New Deal was launched in 1932, creating enormous growth in Federal infrastructure. This growth allowed the government to hire American architects and builders to complete necessary buildings throughout the United States. The Solomon Federal Building was created under the New Deal with construction costing just under half of a million dollars.

Reuben Harrison Hunt completed construction on the Solomon Federal Building and Courthouse in 1933. Hunt had produced the designs for every government building in the area from 1895 to 1935, with the Solomon Federal Building being his last contribution to Chattanooga. Hunt created the building in an Arte Moderne style; he references classical architecture in the size of the building, the marbled facade, and the form of the windows, which create the same feel as a columnned structure. Hunt also drew inspiration from contemporary design, which gave him a very sleek feel to the building overall.

The courthouse has seen several notable cases since opening. In 1960 Mapp et al vs. the City of Chattanooga brought desegregation of schools to the forefront. The ruling called for court mandated desegregation throughout the area. In 1964, Jimmy Hoffa was charged with attempting to bribe a grand jury and fraud. He received a sentence of 13 years in prison.

The building is still currently used as the United States District Court for the Eastern District of Tennessee.