The Old Colony House in Newport, Rhode Island is one of the oldest remaining statehouses in the United States. It is believed to be the fourth oldest statehouse still standing in the nation. Architect Richard Munday designed the Old Colony House in the Georgian style, popular for its symmetry and classic proportions. The state legislature met here during the American Revolution and then alternated between the Colony House and the Rhode Island Statehouse in Providence until 1901. The property was added to the National Register of Historic Places in 1966 (also known as the Old Statehouse). It recently underwent an extensive renovation between 2010 and 2012 before it reopened to the public. Today, the Newport Historical Society operates the Colony House and offers tours during the summer. 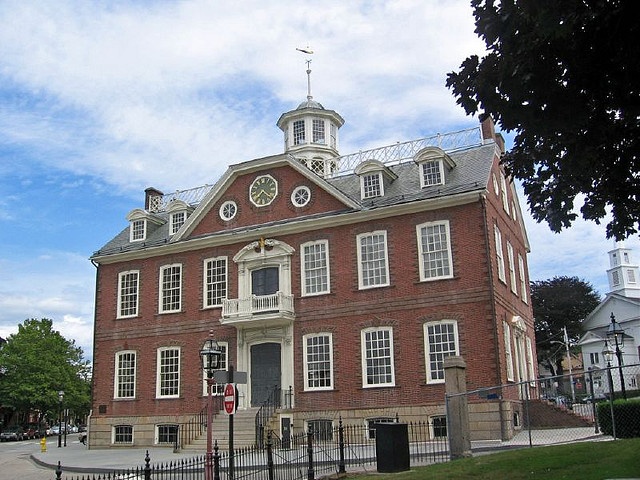 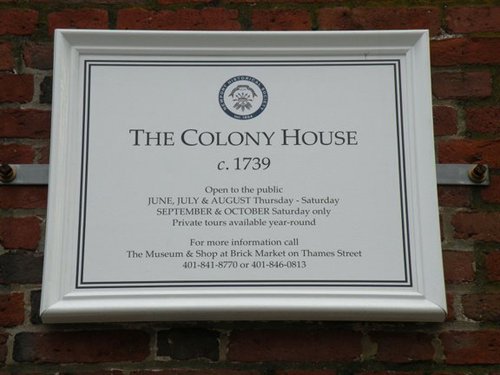 In 1636, the colony on Aquidneck Island was first founded by two individuals who were banished from Boston for their religious beliefs.  Anne Hutchinson and Roger Williams led a group of settlers south to what is now known as Rhode Island.  A couple of years after they first arrived, another band of settlers led by William Coddington and Nicholas Easton moved further south. They established the village of Newport in 1639.  One hundred years later (1739), they constructed the second Colony House which still stands today. Many African-Americans were employed in its construction. It replaced the original courthouse built by the colonists in 1687.

The Colony House acted as a central meeting place for the village.  Legislation was debated, rules were made, and trials were prosecuted. It served as the primary statehouse of Rhode Island and Providence Plantations from its completion in 1739 until 1901. The building was a significant setting for the shaping of the new nation.  Citizens celebrated the repeal of the Stamp Act around the Colony House in 1766.  On July 20, 1776, the Declaration of Independence was read to the people of Newport from the front steps of the Colony House.  During the war (from 1776-1779), the Colony House was used as a barracks when the British forces occupied the area.  They were driven out and then the French used the building as a hospital.  A banquet was held in the building for General George Washington at the end of the war.

The Colony House was left heavily damaged by the Revolutionary War.  It underwent an extensive renovation in the mid-1780s.  The walls were painted a light color meant to give the impression that the building was constructed of stone rather than wood.

In 1901, a new state capitol building was erected in Providence and the Colony House became the Newport County courthouse. It was restored between 1926-1932 by architect Norman Isham.  Isham also worked on renovating two nearby colonial buildings, the Brick Market and the Wanton-Lyman-Hazard House, at the same time as he was restoring the Old Colony House.

In 1960, the Old Colony House was designated as a National Historic Landmark and in 1966 it was added to the National Register of Historic Places. The building recently underwent more extensive renovations between 2010 to 2012 and before it was reopened to the public. The restoration work was completed by the Architectural Conservation Services of Bristol.  The company took samples from the walls and conducted a detailed analysis of the paints used to decorate the building in earlier eras.  John Vaughn, the company’s owner, reported that the interior was painted the stone color (mentioned earlier) made of burnt umber, raw umber, lamp Black and white paint.

Today, the Old Colony House is owned and operated by the Newport Historical Society. Tours are offered and there are presentations remembering the Revolutionary War era, including a portrait of George Washington painted by Gilbert Stuart.

Call for information about tours.