Located in the historic 1905 Jefferson Barrack's Military Post Exchange building, the Missouri Civil War Museum opened in June 2013 and is the largest Civil War museum in Missouri and one of the biggest in the country. It is included in the Top three Museums of St. Louis and was given a 2013 Certificate of Excellence. Its mission is to highlight Missouri's role in the war and tell the story of the Jefferson Barracks Post, which is the oldest active military installation in the country (it is a base for the Air National Guard and Army). Over 1,000 artifacts are on display and there are also several films shown throughout the exhibits as well. 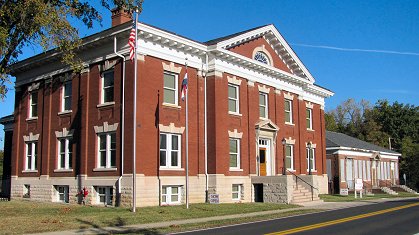 The Missouri Civil War Museum gives tourists an idea of what the pre-Civil War and Civil War eras were like in Missouri. The Museum has a section that is dedicated to life in Missouri before the war that sheds some light on how Missouri became a slave state. Conflicts about slavery started prior to the beginning of the Civil War. When the U.S. was debating on whether slavery should be thrown out, the Missouri Compromise was made in 1820. This made the southern border of Missouri the slavery/free state limit that would not allow slavery north of the limit. It admitted Missouri to the Union as a slave state and Maine joined to be a free state.

Problems arose on the topic of slavery again with the passing of the Kansas-Nebraska Act in 1854. This discredited the Missouri Compromise and gave individual states the choice to become a slave or a free state. This resulted in fighting in Kansas, Nebraska, and Missouri.  Some people in Missouri were for and against slavery and there were citizens from the state that participated on both the Union and Confederate sides. Missouri came into the war as a border state.

In addition to the section that shows what life was like in Missouri leading up to the war, there are many other things to see in the museum that deals with the years of the actual war. One can see military clothing, medical objects, and weapons that belonged to both the Union and Confederacy. Other objects include a cannon, horse and buggy, and other important things from the war. A well-received object is a lounge seat from the Lincoln White House.