Stuart Manor is a historic stone building constructed in 1789 by Colonel John Stuart. Stuart, known as the father of Greenbrier County, was a pioneer, prominent citizen, and soldier. He gained military fame combating hostile Native Americans on the frontier. He participated in the Battle of Point Pleasant where militiamen defeated the famous Chief Cornstalk and a large force of Shawnee. He also was involved in several skirmishes against Native Americans in Greenbrier County, most notably, the attack of Fort Donnally. Stuart Manor also hosts a small structure which served as the first clerk's office of the Greenbrier County Court. 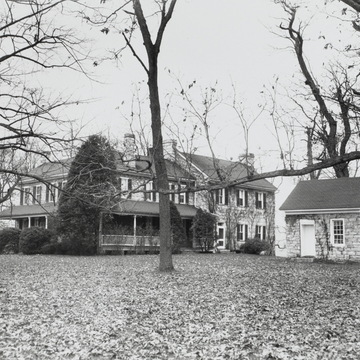 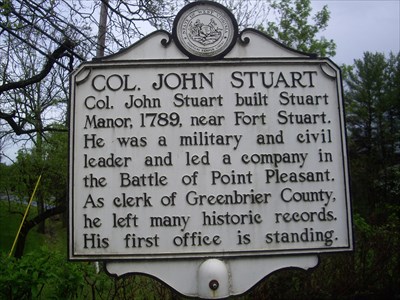 Artist's depiction of the Battle of Point Peasant.

Colonel John Stuart is known as the founding father of Greenbrier County. He was born in Augusta County, Virginia on March 17th, 1749. He arrived in Greenbrier county in 1769, as part of an expedition to establish a permanent settlement in the Greenbrier Valley. He first settled near the town of Frankford in 1770 where he established the first mill in the valley. He later moved to the Lewisburg Area and in 1789, where he constructed Stuart Manor.

Stuart gained military fame combatting hostile Native Americans on the frontier. Most notably, he led a company of men from Greenbrier County at the Battle of Point Pleasant. The Battle of Point Pleasant was a vicious and bloody battle fought in October 1774 between Virginia militia men and the Shawnee led by Chief Cornstalk. 900 Shawnee warriors attacked a military fort at the junction of the Ohio and Kanawha Rivers at Point Pleasant. Despite being outnumbered and suffering many casualties, the militia men defeated the Shawnee.

In 1778, Stuart was once again involved in a major clash between settlers and the Native Americans. On May 29, between 50 and 300 Wyandot and Mingo Native Americans attacked Fort Donnally in the Greenbrier Valley. During the attack, 20 local militiamen under the command of Colonel Andrew Donnally and around 60 women, children, and slaves had taken refuge at the fort. An African American slave named Dick Pointer is noted in historical records as fighting off an initial surprise attack by the natives and alerting the others of the attack. The militiamen fought the Native Americans until Colonels Samuel Lewis and John Stuart arrived with reinforcements. Shortly after, the Native Americans withdrew their attack suffering a loss of 17 warriors.

Stuarts homestead near Lewisburg hosts several early structures. The first permanent structure build on the grounds is a small, one-room house constructed out of native limestone. This building served as Stuarts first home and when he was elected clerk of the Greenbrier County Court in 1778, it became the county’s first clerk’s office. 1789, Stuart constructed a larger structure, Stuart Manor, next to the clerk’s office. Stuart Manor is an L-shaped, one-story house constructed from brownish gray fieldstone. In 1820, Stuart’s son, Lewis Stuart, built a large addition to the north side of the original house constructed from coursed limestone blocks. Stuart Manor was restored and modernized by architect Floyd Johnson of Charlottesville, Virginia in the 1970s and in 1973 it was officially added to the National Register of Historic Places.