Fort Sumter is a sea fort located within the Charleston Harbor. After the War of 1812, the United States designed military forts to be placed strategically along the entire eastern seaboard. Fort Sumter would experience two major battles during the Civil War. While Confederate partisans skirmished in several places, Fort Sumter saw the first exchange of fire between a major command of Confederate forces and the U.S. military on April 12, 1861. This exchange of fire would later become the most commonly-accepted starting point of the Civil War but attempts to prevent the war continued even as Sumter marked what would become a point of no return in the war's escalation. Following the Confederate defeat, the fort would fall out of commission for many years, functioning primarily as a lighthouse for a period of time. Today the fort is considered a National Monument and houses a Visitor Education Center.

Historic Print of the bombardment of Fort Sumter by South Carolina militiamen and cadets from the Citadel, the Military College of South Carolina 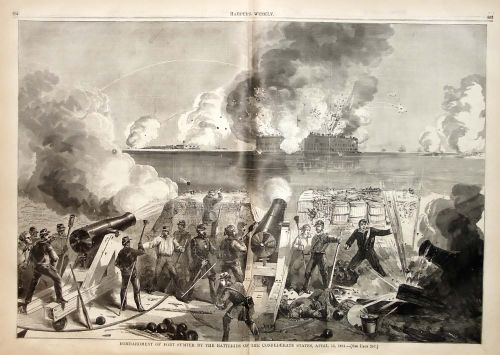 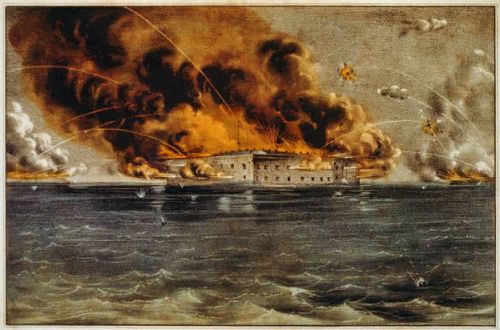 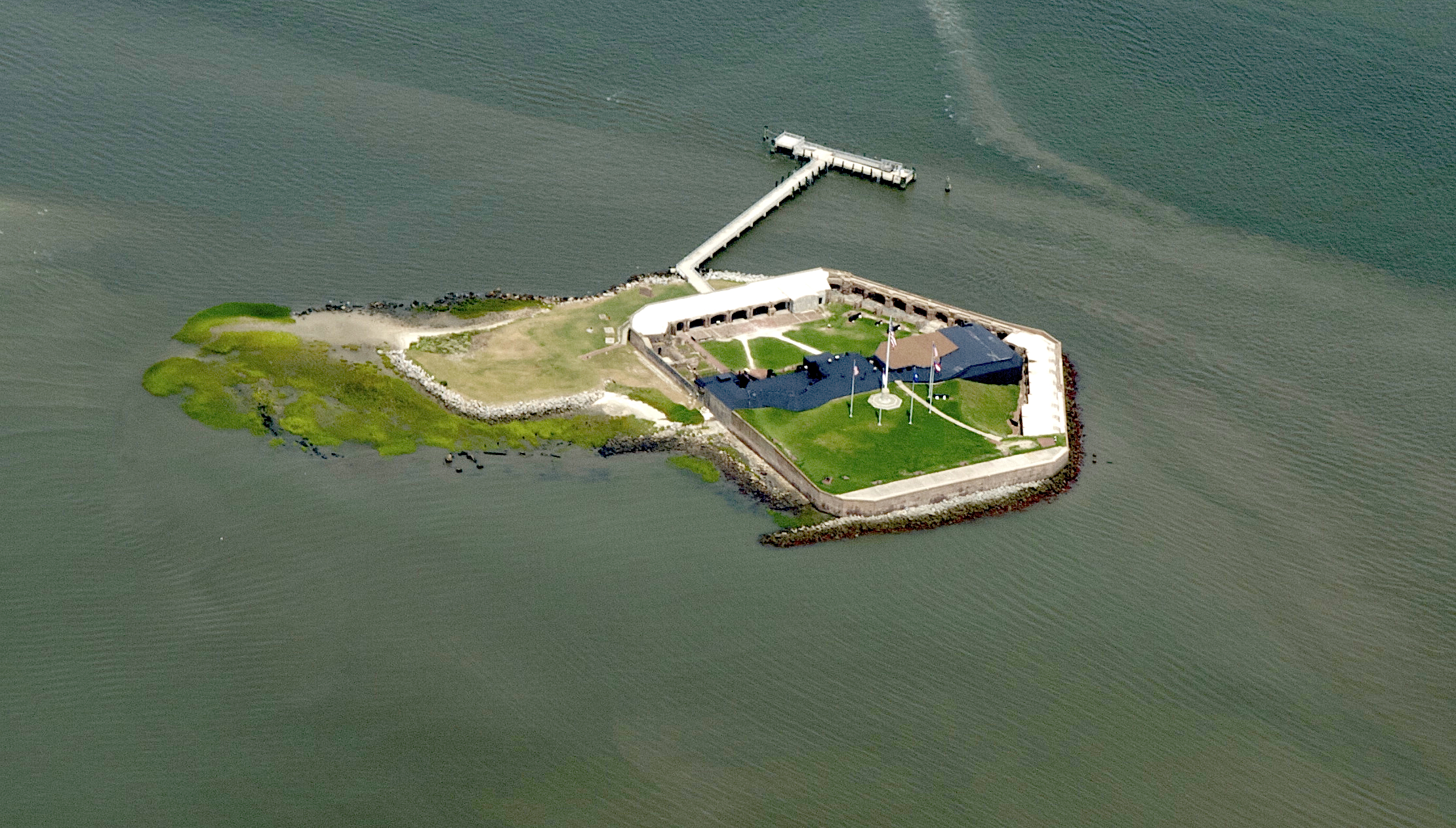 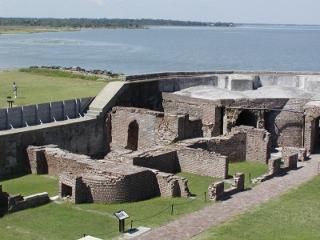 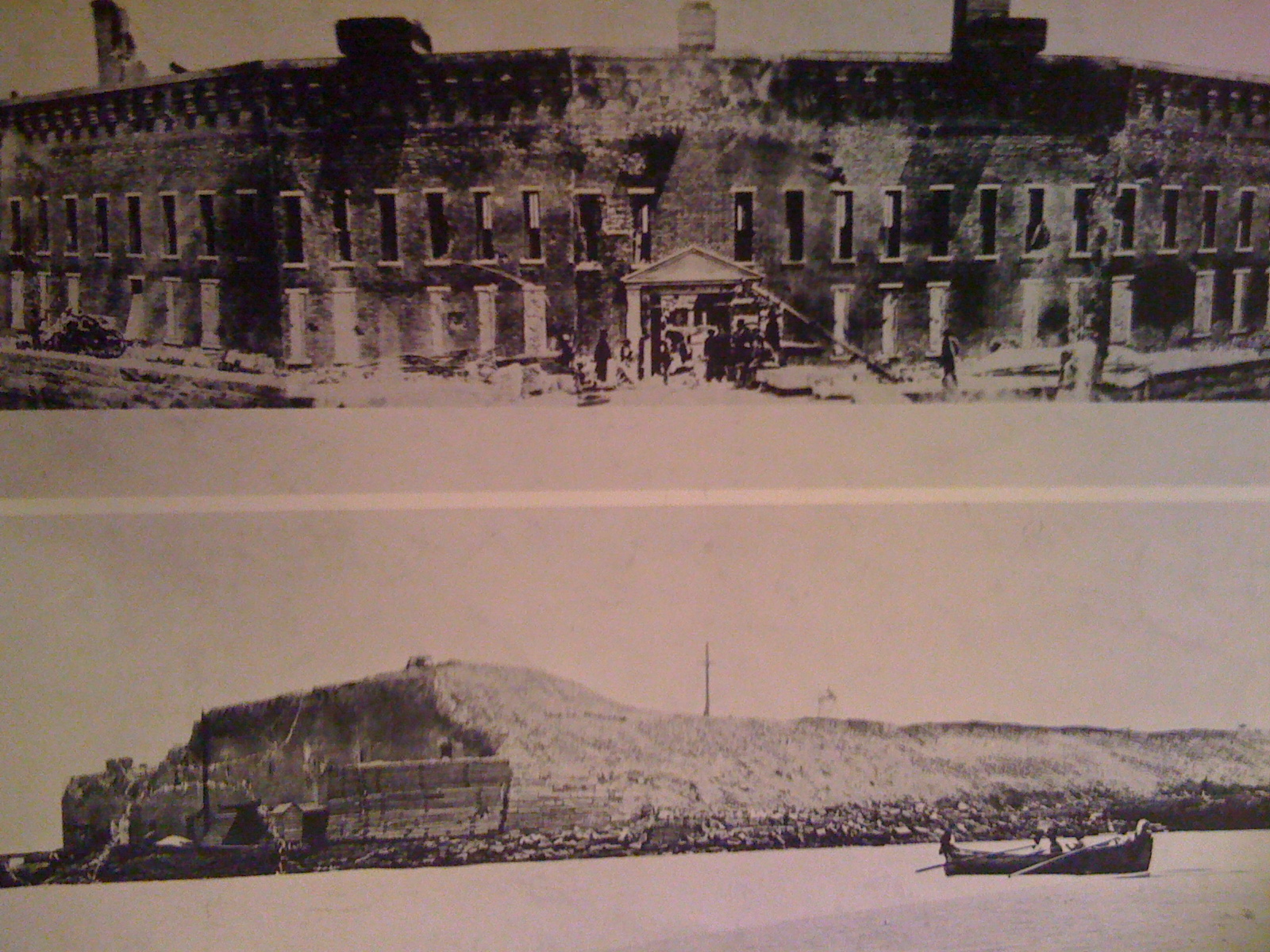 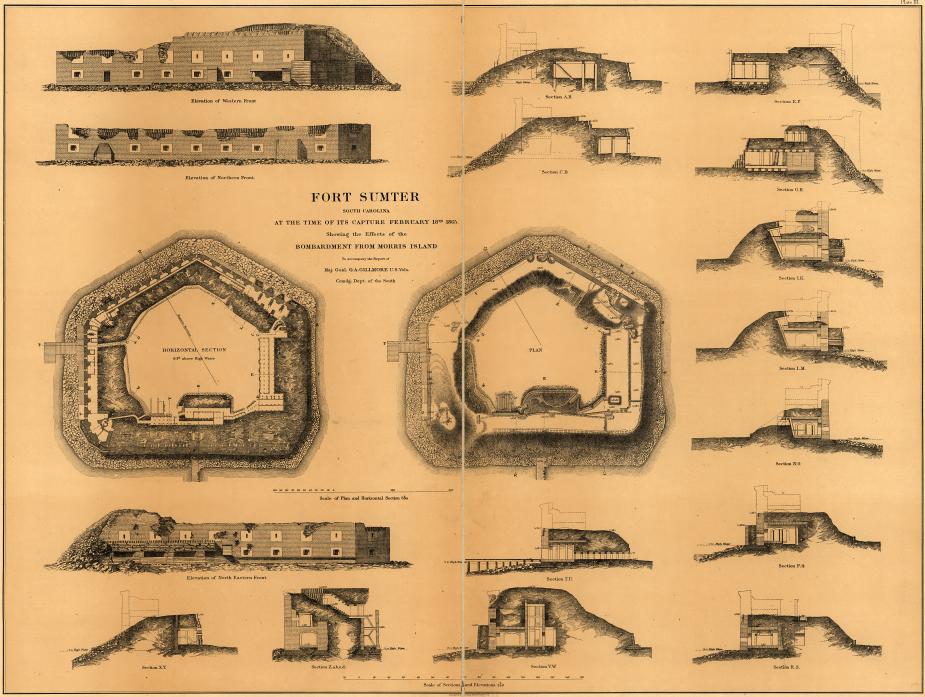 Built in 1829, Fort Sumter was named after General Thomas Sumter, a Revolutionary War hero. The fort was built to protect Charleston Harbor from enemy navies and control of Sumter was key to controlling the harbor. The United States government began building a series of fortifications up and down the southeastern U.S. Coast to provide adequate coastal defenses.  At full capacity, Fort Sumter could hold approximately 650 men and 135 cannons for defense of the harbor.

On December 20, 1860, the state of South Carolina seceded from the Union. At that time, Fort Sumter had only half of its potential garrison but still could prevent the Confederacy from controlling the harbor of one of their leading port cities. South Carolina's rebel government ordered that the fort, along with Fort Moultrie, be vacated. By their reasoning, ownership of the land had reverted to the state of South Carolina and the federal government and the US Army were a foreign presence.

Most of the forts that had been built to protect the eastern seaboard were seized by state militias, including Fort Pulaski in Georgia. President James Buchanan did little and viewed critically today by historians as he did little as the Confederacy grew and took control of military installations. However, Buchanan did not order the men at Fort Moultrie, a fort on the mainland, to vacate. On December 26, 1860, U.S. Major Robert Anderson, under orders signed by the President, relocated companies E and H from Fort Moultrie, approximately 127 men, to Fort Sumter in hopes that it would delay an attack on the South Carolina Militia. Subsequently, Fort Moultrie was taken.

On January 9, 1861, the Star of the West, a steamship that was sent to resupply the fort, was fired upon by cadets of the Citadel, the Military College of South Carolina. Anderson did not provide covering fire for the ship in hopes of de-escalating the situation and the vessel turned back for New York. Confederate Brigadier General P.G.T. Beauregard, who had studied under Anderson at West Point, called for the evacuation of Fort Sumter. Anderson ignored the demands of his former pupil but also avoided actions that would provoke a military response. Buchanan went much further, blocking plans made by General Winfield Scott to resupply and reinforce the fort which left the American soldiers who were garrisoning the fort without supplies.

Colonel James Chesnut Jr., Captain Stephen D. Lee, and Lieutenant A.R. Chisolm were sent by Beauregard to Fort Sumter to demand the surrender of the fort on April 11, 1861. General Beauregard authorized Chesnut to decide whether or not the fort should be taken by force if Anderson refused. Around 3 am Anderson decided that he would not surrender Fort Sumter to the Confederates, and gave the three aides his conditions. Chesnut, Lee, and Chisolm returned to neighboring Fort Johnson where Chesnut ordered the fort to fire on Fort Sumter.

Confederate batteries opened fire on Fort Sumter at 4:30 am on Friday, April 12, 1861, and continued firing for thirty-four straight hours. For the first two hours of the attack, Fort Sumter made no attempt to return fire. Captain Abner Doubleday, the forts second in command, fired the first retaliatory shot at approximately 7:00 am. On April 13, 1861, Fort Sumter was surrendered to the Confederates and evacuated. The supply ship Star of the West took the evacuating men from Fort Sumter to safety in New York City.

The surrender of the fort both emboldened Southern fire-eaters and reinforced Northern resolve. The taking of the fort was one of the most important catalysts that led to war, and Lincoln understood that the fact that the South had fired on American soldiers would provide an important counter against the South's claims that the Union was the aggressor.

The surrender of Fort Sumter demonstrated that the crisis was no longer just political and allowed Lincoln to call for 75,000 volunteers to bolster the American army. In the South, Beauregard was feted as a hero and more men joined local militias to fight what they assumed would be a quick and victorious war. The dithering and conciliatory approach of Buchanan was quickly ended when Lincoln came into office. While he opposed slavery, his only priority at this stage was the preservation of the Union.

The Union attempt to retake Charleston Harbor and Fort Sumter began on April 7, 1863. Rear Admiral Samuel Francis DuPont led nine vessels into the harbor, including the Union's best ship, USS New Ironsides. The attack did not go as planned. The USS New Ironsides was not able to effectively engage the Confederate occupiers and only 154 rounds were fired. One of the nine union ships, the USS Keokuk, sank the next day due to the damage that it had received.

Major General Quincy A. Gilmore and Rear Admiral John A. Dahlgren launched a boat attack on Fort Sumter on the night of September 8-9, 1863. Due to tensions between the Army and the Navy, Dahlgren refused to allow Gilmore to command his sailors and marines. Two flotillas set out to Fort Sumter; the Army flotilla was stuck on Morris Island by the low tide. The Navy flotilla continued for the assault and was defeated. However, the Fort would be retaken by the US army at the end of the war and the raising of the American flag was a symbolic end to the war.

Fort Sumter was not manned by soldiers from 1876-1897. During these years, it served primarily as a lighthouse station. Maintenance of the area was so poor that gun platforms were allowed to rot, guns rusted, and the area began to erode. News of the impending Spanish-American War prompted renewed interest in the fort. Construction of a new battery began in 1898 and two long-range twelve-inch guns were installed in 1899. A small group of men manned the rifles at Battery Huger during World War I. The fort was not manned in subsequent decades although World War II led to the fort's reactivation. During the last years of World, War II 90-mm antiaircraft guns were installed along the right flank and manned by a company of Coast Artillery.

Hours vary based on season and day. See website or call for details. Please note: ferry must be taken to reach Fort Sumter. Ferries leave from Charleston and Mount Pleasant. Please see the National Park Service website for additional information.