Opened in July 1997, The Georgia O’Keeffe Museum is dedicated to the life and work of O'Keeffe (1887-1986). One of the most prominent artists during the 20th century, O'Keeffe is best known for her large-scale and abstract paintings of flowers and other scenes from nature and city life. Later in her life, she found inspiration in the New Mexican landscape Native American and Hispanic cultures, which she incorporated in her paintings. O'Keeffe's artwork of New Mexican landscapes coincided with a growing interest in region's scenery by American Modernists seeking a unique perspective of the United States. After traveling back and forth from her home in New York to New Mexico for nearly 20 years, O'Keeffe moved to New Mexico in 1946, and she lived there until her death in 1986. At the time of the museum's opening, it was the only art museum in the United States dedicated exclusively to the life and work of an internationally recognized female artist. In addition to her artwork and belongings, the museum also has procured both of O'Keeffe's homes in Northern New Mexico. 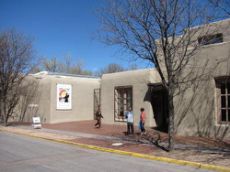 The Woman Behind the Museum: Georgia O'Keeffe 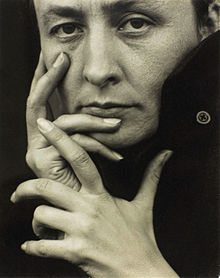 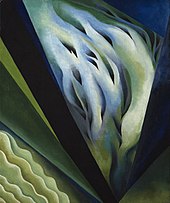 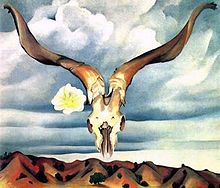 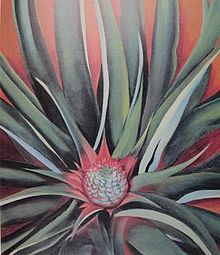 Georgia Totto O'Keeffe was born on November 15, 1887 in Sun Prairie, Wisconsin. She was one of seven children to diary farmers, Francis and Ida O'Keeffe. Growing up, Georgia had strong aspirations to be an artist, and by the time she graduated from high school in 1905, she was determined to pursue her dreams. O'Keeffe studied art at Art Institute of Chicago and Arts Student League in New York. After quickly mastering traditional art techniques and painting realism, she then studied and practiced American artist and photographer, Arthur Wesley Dow's abstract style, and for a while, her work was primarily charcoal and chalk drawings. Afterwards, she worked as a commercial artist, and she eventually taught art and was the head of the art department at West Texas State Normal College. In 1916, her work was first exhibited by New York art dealer and photographer, Alfred Stieglitz (1864-1946). He was marveled by the O'Keeffe's work when one O'Keeffe's friends showed him her work. Stieglitz offered to financially support O'Keeffe, which she accepted the offer and moved to New York to live with him in 1918. Despite a 24-year difference, the two fell in love and married in 1924.

Soon, O'Keefe quickly gained fame in the 1920s for her abstract paintings and drawings of flowers, natural scenery, and even city life and skyscrapers. While Stieglitz was promoting her art, he also used O'Keeffe as a model for many of his photographs. In 1929, O'Keeffe's took a trip to Taos, New Mexico with a friend, and she fell in love with the New Mexican landscape and the Native American and Hispanic cultures in the area. For nearly 20 years, O'Keeffe would travel during the summers to New Mexico and would spend the entire summer painting. She blended her own style with subjects of New Mexican landscapes, greenery, and skies to create unique works of art. She also became close friends with the artists and locals in the area. O'Keeffe's artwork of New Mexican landscapes coincided with a growing interest in region's scenery by American Modernists seeking a unique perspective of the United States. During her stays in New Mexico, she would participate in pack trips and would explore the land with her Model Ford A. In 1946, after Stieglitz died, she permanently moved to New Mexico.

O'Keeffe owned two houses in Northern New Mexico. Her summer home is a 12-acre property that is located at the edge of a 21,000-acre property called Ghost Ranch. Her second house is located at Abiquiú, and it includes a studio where she would paint and draw. As her artwork blossomed in New Mexico, she also would travel internationally throughout the 1950s and 1960s. O'Keeffe visited several places, such as Peru and Mt. Fiji, and she incorporated what she saw into her artwork. She also won many accolades and awards, but the most important was when the Whitney Museum of American Art noted her as one of the most important and influential American artists. Eventually, she lost most of her eye sight due muscular degeneration, and she withdrew from her artistic lifestyle. Yet, after meeting a young ceramic artist named Juan Hamilton, she went back to art. Hamilton would assist O'Keeffe with her artwork and work around her houses. In 1976, she released her illustrated autobiography, which became a national best seller. In 1977, President Gerald Ford awarded O'Keeffe with the Medal of Freedom. In 1984, with her health declining, O'Keeffe moved to Santa Fe, New Mexico, and on March 6, 1986, she passed away at the age of 98

11 years after O'Keeffe's death, the Georgia O'Keeffe Museum in Santa Fe, New Mexico opened in 1997. When the museum opened, it was the only art museum in the United States dedicated exclusively to the life and work of an internationally recognized female artist. In addition to O'Keeffe's artwork and belongings, the museum has also procured both O'Keeffe's houses, but the museum only offers public tours at the Abiquiú house and studio. Also, the museum has a gift shop inside where people can buy books about Georgia O'Keeffe and New Mexican art, jewelry, apparel, stationary, and posters. The museum also holds several types of social events, such as lectures about O'Keeffe and her artwork, drawing classes, and studio showcases featuring local artists in the Santa Fe area.