Lost World Caverns is one of the largest and most decorated commercial caves in the Appalachian Mountains. Located in the Greenbrier Valley, just north of Lewisburg, West Virginia, the cave stretches almost 3 miles and 235 feet below the surface. The Cave was first discovered in 1942 and today a large portion of the Cave has been made accessible to the public. The commercial section of the cave is 300 feet long, 50 feet wide, and 50 feet high and boasts some of the largest calcite formations in the nation. Lost World Caverns is a National Natural Landmark. 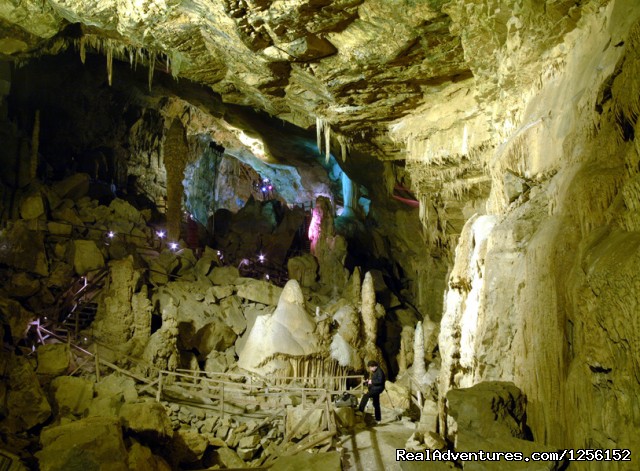 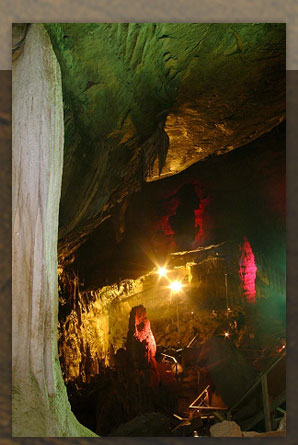 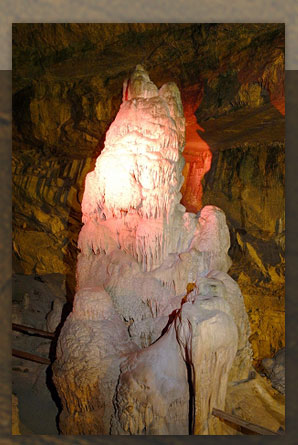 "The Bridal Veil" and "The Castle" 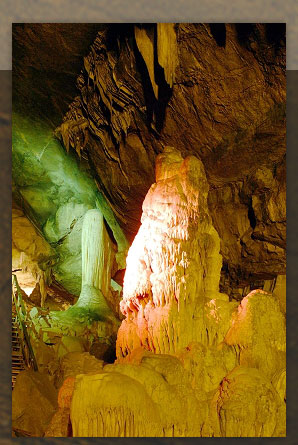 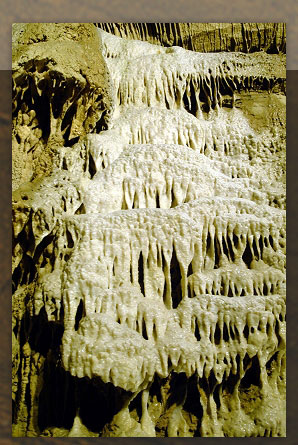 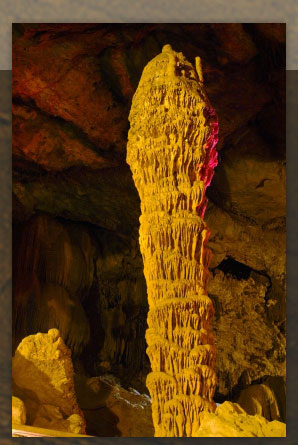 Lost World Caverns is located two miles north of Historic Lewisburg, West Virginia, just north of Interstate 64.  The cave is situated in the heart of the Greenbrier Valley, one of the most karst areas in the Appalachian Mountains. The term “Karst” is used by geologists to define landscapes underlain by limestone that have been eroded by dissolution, producing ridges, towers, fissures, sinkholes, caves, and other characteristic landforms. Due to its unique topography, there are hundreds of caves scattered beneath the surface of the valley making it a popular destination for cavers. Lost World Caverns is one of the largest caves in the Greenbrier Valley and one of only two commercial caves in the valley that are easily accessible to the public.

The cave was first discovered in 1942 and was originally named “Grapevine Cave”. The original entrance to the cave is a small hole on the slope of a small ridge which drops 115 feet straight into one of the largest and most decorated rooms of the cave. 300 feet long, 50 feet wide, and 50 feet tall, this room would eventually become the commercial section of the cave. The remains of a prehistoric cave bear (Arctodus Prietinus) were discovered in the cave in 1967. In 1968 a passage was dug into the cave and this passage was improved in the 1980s to make the cave more accessible to the public. Today the cave is registered as a Natural National Landmark.

In the cave, guests can walk on a wooden boardwalk and view some of the largest and most beautiful calcite formations in the nation. These formations include The Snowy Chandelier, a 30 ton compound stalactite, The Bridal Veil, a large flowing columnn of white calcite, and The War Club, a 28 foot tall stalagmite. These formations are accompanied by other beautiful formations like The Smurf Village, The Pigtail, The Ice Cream Wall, and Goliath.