Located in Orlando, the Holocaust Memorial Resource and Education Center of Florida presents stories of the Jewish experience during and beyond the Holocaust. Exhibits relate the stories of resistance and liberation, as well as first-hand accounts by survivors. Displays show what life was like in the concentration camps and throughout Nazi-occupied Europe. In addition to presenting the history of the Holocaust, the center also strives to foster a community that is free of racism and prejudice. It offers various education and outreach programs, permanent and temporary exhibits, and a library of archives.

The Holocaust Memorial Resource and Education Center of Florida 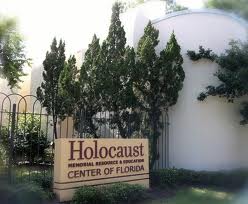 Permanent exhibit at the center 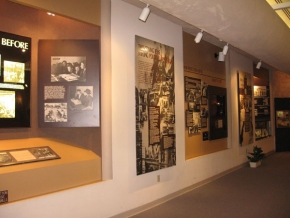 A portion of the "The Holocaust Project: From Darkness into Light" art installation 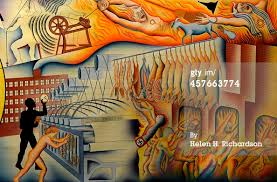 The Jewish Federation of Greater Orlando and Valencia College sponsored community-wide events on the Holocaust and human rights issues in 1980. Similar events took place in the following years culminating in the construction of the center in 1986. The center was the only one of its kind in the southeast until 1996.

Since those initial community-wide cultural events in 1980, the center has sponsored a multitude of cultural and educational events about the Holocaust and human rights. Notably, the center partnered with the Orlando Museum of Art to host the famous art installation, The Holocaust Project: From Darkness into Light. This ambitious art project, created by Judy Chicago and her husband Donald Woodman, along with a select number of artisans, served to present the Holocaust as a prism through which to view and attempt to understand present-day injustices and human rights violations. The project, which took eight years to complete, began as a desire on the part of Chicago and Woodman to understand their own Jewish identity. As its name suggests, with a variety of visual stimulation, the exhibit takes the viewer deep into the darkness of despair and injustice of the Holocaust and then into the light of hope.

The center was also once host to a program in which James Carroll was featured. Carroll is the author of the book Constantine’s Sword, which is now also a documentary by the same name. Carroll, a former priest, wrote this book primarily to explore and document the role of the Roman Catholic Church in the history of Europe’s anti-Semitism. The documentary focuses on this topic as well, but also goes on to explore more recent abuse of religion to violent ends. The modern-day topic that the documentary focuses most heavily on is the evangelical conversion attempts at the US Air Force Academy.